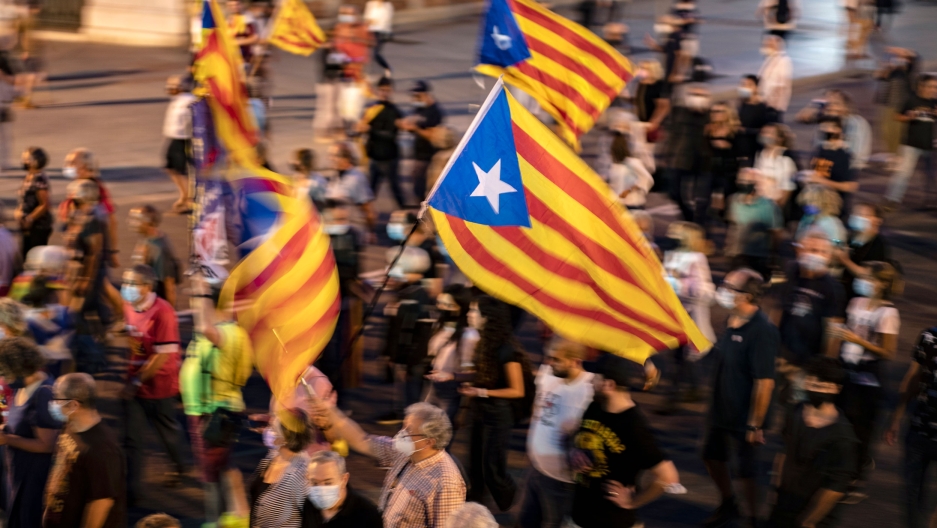 In honor of Indigenous Peoples Day, this week and next on Deep Dive we’ll engage with new research on self-determination, a cause long championed by Indigenous leaders and activists that became the watchword for independence movements around the world.

Related: The limits of non-violence: Part I

It’s been a tough few months for symbols of Catalan independence. The pride of the autonomous community located in eastern Spain, FC Barcelona, lost its talismanic striker Leo Messi after years of financial mismanagement of the club. Worse, he departed for another, slightly more successful postcolonial nationalist project. Soon after, former Catalan leader Carles Puigdemont was arrested in Italy after fleeing Catalonia four years earlier.

Violent politics not being the typical order of the day in Spain: The crackdown galvanized a huge reaction, leading to massive protests and a constitutional crisis.

Puigdemont was on the run because of his role in the dastardly crime of helping run an illegal referendum. In 2017, the Catalan government under Puigdemont’s leadership announced that it would hold a popular vote on whether to secede from Spain altogether and pursue life as an independent country. The Spanish government deemed the vote illegal and unleashed a wave of repression in Catalonia, sending police to interfere with the conduct of the referendum and injuring over 1,000 Catalan civilians in the process. Violent politics not being the typical order of the day in Spain: The crackdown galvanized a huge reaction, leading to massive protests and a constitutional crisis.

As it stands, Catalonia is not substantially more independent today than it was in 2017 — a fact underlined by Puigdemont’s years on the run. Yet the events of 2017 still reverberate today. A new article by political scientists Laia Balcells, Spencer Dorsey, and Juan Tellez in the British Journal of Political Science attempts to measure those reverberations.

Balcells et al. use surveys from before and after the referendum crisis to isolate the effect of Spanish repression on Catalan attitudes toward independence and various government institutions. They find that, overall, people became about 7% more likely to support independence after Spanish police interfered in the referendum. That may not seem like a huge shift, but, as the authors point out, it could be big enough to “flip the independence question from minority to majority support.”

Confidence in the Catalan government and parliament increased after the crackdown, but confidence in Spanish governmental bodies cratered.

Even for people with only a loose association with a victim, the effect on independence preferences is strong.

The researchers also asked about whether the respondents knew anyone who was injured in the violence around the referendum. People who reported having friends and family among the victims unsurprisingly increased their support for independence and their willingness to participate in protests. Somewhat more surprisingly, that tendency held even for people who didn’t vote in the referendum — that is, people who were likely not highly committed to independence before the crackdown. Interestingly, the results also hold if you separate people with close friends and family among the victims and people who only had a passing familiarity with someone who was injured by Spanish police. Even for people with only a loose association with a victim, the effect on independence preferences is strong.

As Balcells et al. note, the value of loose relationships in driving reactions to repression underline the problems that face repressive governments in the internet age. Governments have long understood that arresting or injuring an activist is likely to anger that activist’s immediate circle. However, when the potential for backlash extends to all of the activist’s Twitter followers and Facebook friends, the costs of repression could be far higher.

Critical State is your weekly fix of foreign policy without all the stuff you don’t need. It’s top news and accessible analysis for those who want an inside take without all the insider bs. Subscribe here.

AbbVie and More Companies That Are Expected to Raise Their Dividends

What To Do After Getting Diagnosed With Sleep Apnea