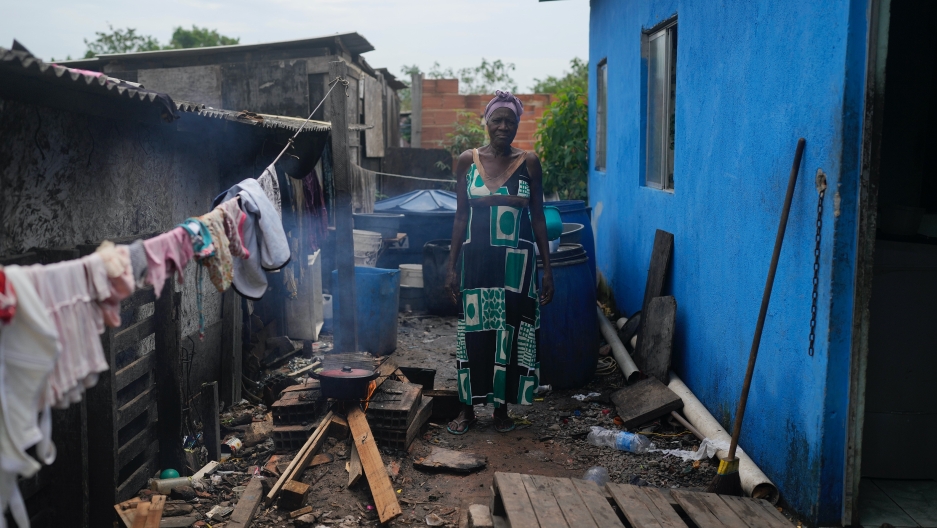 Last week, more than a thousand housing activists marched in Brasilia, Brazil’s capital, and occupied the entrance to the country’s Finance Ministry.

Videos of the protest show a sea of people wearing red-and-yellow shirts with insignias signaling their housing movements and chanting before a row of military police. It was one of several related protests last week.

Related: Behind in polls, Bolsonaro bolsters his base with far-right rhetoric from the US

In Brazil, the revelations from the “Pandora Papers” — a trove of leaked documents that have exposed offshore accounts of the rich and powerful — have rattled the government of President Jair Bolsonaro, with calls for the resignation of some of his top officials.

That includes Finance Minister Paulo Guedes, who, with his family, was shown to be holding $9.55 million in offshore accounts in the British Virgin Islands.

Some people blame him for getting rich off of the devaluation of the Brazilian real — while inflation and gas and electricity prices soar, and the housing market crashes.

Bolsonaro says things have improved over the last year in #Brazil. The numbers show a different reality. Inflation has risen 10% over the last 12 months & these prices have skyrocketed:
Airline tickets, up 56%
Gas, up 40%
Cooking gas, 35%
Home energy, 29%https://t.co/8ed5R6bQI7

In 2018, 33 million Brazilians were either homeless or had inadequate housing, according to the UN. Experts say the situation has intensified amid the pandemic.

A plethora of housing programs — including the construction of social housing, and loans and credits for low-income families and communities — have been largely frozen under the Bolsonaro government.

At least 14,300 families were evicted from March 2020 to June 2021 nationwide, while another 85,000 are threatened with eviction, according to the organization Zero Evictions (Despejo Zero).

“We have seen more families losing their homes,” said Evaniza Rodrigues, the head of the National Union for Popular Housing, one of the protest’s organizers. “We have seen more evictions. People have lost their jobs and their ability to pay rent.”

“That’s why we protested at the Finance Ministry. Paulo Guedes had millions of dollars in fiscal paradises, while he cut resources for housing and social policies in Brazil.”

“That’s why we protested at the Finance Ministry,” said Dito Barbosa, a lawyer with São Paulo’s Union of Housing Movements. “Paulo Guedes had millions of dollars in fiscal paradises, while he cut resources for housing and social policies in Brazil.”

Guedes and his family have reportedly made nearly $3 million in offshore accounts since he became finance minister in 2019. The Brazilian currency has lost nearly 40% of its value against the dollar since then.

Hang recently testified before Congress amid allegations that he helped fund a pro-Bolsonaro fake news scheme and pushed the unproven drug hydroxychloroquine for use against COVID-19.

The allegations against the country’s top finance officials are shaking Bolsonaro’s government.

“There is a conflict of interests,” said economist Lauro Mattei, a professor at the Federal University of Santa Catarina. “Above all, because these are the people who are overseeing the country’s financial policies. And they can anticipate profits or make decisions that can benefit themselves.”

Guedes says his offshore accounts are legal. But many are now calling for his and Campos Neto’s resignation.

Among them is Eduardo Moreira, a former investment banker who denounced Guedes in a video he posted on social media that has reportedly been shared among top members of Bolsonaro’s government.

“You’re talking about someone who is responsible for the economy of a country, and he doesn’t want to pay taxes there and runs from it. That’s absurd.”

“You’re talking about someone who is responsible for the economy of a country, and he doesn’t want to pay taxes there and runs from it. That’s absurd,” Moreira said.

Guedes is a big name in the Bolsonaro government, and a bit of an icon for libertarians and conservatives in Brazil. He was one of the so-called Chicago Boys, a group of young Chilean economists who studied free-market policies under the Nobel Prize-winning Milton Friedman at the University of Chicago in the 1970s. Guedes went on to work in Chile under dictator Augusto Pinochet before founding Latin America’s largest investment bank.

Under Bolsonaro, he’s pushed to implement a wave of privatizations that would upend the Brazilian state.

Related: Bolsonaro pulls out all the stops to rally base on Brazil’s Independence Day

“We have concessions and privatizations in infrastructure, in natural gas, in oil, in electricity, water and sewage,” he said during a meeting with the Brazil-US Business Council last year. “We are approving all these regulatory framework[s] to open the frontier for new investments.”

But that investment hasn’t arrived. And Brazil’s economy is not well.

“The Pandora Papers revelations will generate more instability in an economic system that is already really precarious,” Mattei, the economist, said. “Low [gross domestic product], lack of investment, unemployment, hunger and poverty on the rise, and the return to inflation. These revelations will put fuel on the fire and make Brazil’s macroeconomic environment even more unstable.”

Brazil’s Lower House and Senate have requested hearings with both Guedes and Campos Neto. It’s unclear whether there’s enough political pressure to force them out.

It’s just another political crisis for Bolsonaro, whose rejection rating is at its highest since the beginning of his presidency, a year out from the 2022 elections.