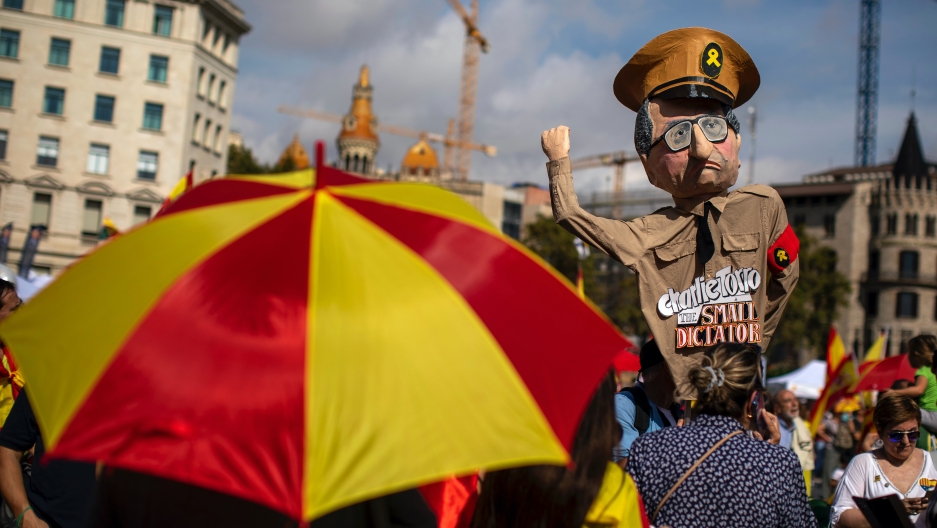 Every year on Oct. 12, there’s a huge celebration in Madrid.

Thousands of people line up along the avenue leading to the Royal Palace, waving Spanish flags of all sizes. The day starts out with King Felipe VI and the rest of the royal family greeting the crowd, as well as top government officials. After the national anthem plays, an hourlong military parade begins, full of canons, tanks and planes blowing smoke in red and yellow — the colors of the Spanish flag.

Much like in the US, the holiday marks the supposed day in 1492 when Christopher Columbus arrived on the island of Guanahani, believed to be present-day San Salvador Island in the Bahamas. The Italian explorer had set sail from Spain under the sponsorship of King Ferdinand II and Queen Isabella I.

Related: How Columbus Day contributes to the cultural erasure of Italian Americans

As of this year, President Joe Biden has proclaimed the holiday Indigenous Peoples’ Day to celebrate the “invaluable contributions and resilience of Indigenous peoples” and “recognize their inherent sovereignty.” Various US states and cities had already changed the name, following years of debate on whether Columbus should be honored for the violence and oppression that Indigenous communities faced following his arrival in the Americas.

In Spain, however, there’s no real debate around the holiday, said Izaskun Álvarez, professor of colonialism in the Americas at the University of Salamanca.

“It’s rarely discussed in local media or among Spaniards. For centuries, Spain considered 1492 as the year their territory grew and they became a unified empire, which included the expansion of its language and culture.”

“It’s rarely discussed in local media or among Spaniards,” Álvarez said. “For centuries, Spain considered 1492 as the year [its] territory grew and they became a unified empire, which included the expansion of its language and culture.”

Álvarez said, in some ways, that idea persists to this day.

The Oct. 12 celebrations in Spain began in the late 19th century when it was called Día de la Raza (Day of the Race). It later changed to Día de la Hispanidad (Hispanic Heritage Day), and since 1987, is called Fiesta Nacional de España (Spain’s National Day).

The holiday celebrates Spanish national pride — something akin to Bastille Day in France or the Fourth of July in the US. But contrary to those holidays, which marked the start of democracies, Oct. 12 marks the start of what many scholars consider one of the biggest genocides in history. It’s difficult to know exactly how many Indigenous people lost their lives as a result of violence or diseases brought over by Europeans, but some estimates put that number at around 100 million.

“This day and age, Spaniards aren’t celebrating their colonialist past,” Álvarez said. “It’s simply a day to take off work or school.”

But, for some, that lack of reflection is precisely the problem.

Except for a few left-wing politicians who refuse to attend Spain’s National Day celebrations, Álvarez said there’s no big push from Spanish institutions to change the name of the holiday or participate in revisionist history.

In 2019, Mexican President Andrés Manuel López Obrador asked the Catholic Church and the Spanish government to publicly recognize the grievances committed against Indigenous people during the colonization of the Americas. But Spain’s governing center-left Socialist Party refused, saying that neither Spain nor the Spanish crown needed to apologize to any country.

Other politicians, like the leader of the right-wing Popular Party, Pablo Casado, went even further, saying that Spain “didn’t colonize, what we did was to make Spain larger.”

But Pope Francis did listen to López Obrador’s plea. Last month, during Mexico’s bicentennial celebrations, the pope sent a letter of apology where he recognized the “sins” committed by the Catholic Church there.

And it wasn’t his first time apologizing. Pope Francis has acknowledged the church’s wrongdoings in various visits to Latin America since becoming pope in 2013.

His actions reflect those of his home country of Argentina, where, in 2010, Columbus Day was changed to Día del Respeto a la Diversidad Cultural (Day of Respect to Diverse Cultures). Many other Latin American countries — such as Ecuador, Peru and Bolivia — have done the same.

In Argentina’s capital of Buenos Aires, the celebrations on Oct. 12 look much different from those in Spain. They’re led by Indigenous groups playing traditional instruments and waving various tribes’ flags.

Tony Reyes León, from the Indigenous group Qom, said it’s important that the government recognize people like him as part of Argentine society — but changing the name of the holiday is not enough.

“There’s the narrative that Argentines are descendants from European migrants, but 60% of us have Indigenous roots, and no one wants to recognize that. At school, they don’t teach children about the real problem that Indigenous groups faced, and continue to face today.”

“There’s the narrative that Argentines are descendants from European migrants, but 60% of us have Indigenous roots, and no one wants to recognize that,” Reyes León said. “At school, they don’t teach children about the real problem that Indigenous groups faced, and continue to face today.”

Related: Catalonia’s temporary tele-abortion services are a game-changer for women with limited access

Reyes León is part of an activist group called Tres Ombúes who are fighting for their ancestral lands to be protected by the federal government as a sacred spot. His colleague Jakeline Mariaca, whose ancestors were Quechuan and Aymaran, said that Argentina’s government does not actually respect diverse cultures like the name of the holiday implies.

“They continue to take away our land, to contaminate our water,” Mariaca said. “All we ask is for the government to respect our territory and meet the promises they’ve made.”

Mariaca said it “breaks her heart” to see the kind of celebrations Spain continues to partake in every Oct. 12.

“I’d like to appeal to Spaniards’ empathy and ask them to look at things from our point of view, to recognize the importance of our roots and traditions,” Mariaca said. “On top of killing us, they killed our culture too.”

And they got richer too, Reyes León added. He said the least Spain could do is recognize the genocide it committed against Indigenous groups as well as what it stole from their lands.

“In the Bolivian city of Potosí, half of a mountain’s worth of silver was taken to Spain,” Reyes León said. “In the end, Europe wouldn’t be what it is today without the wealth it took from this part of the world.”

Jyotika Birthday: 13 Pictures Of The Actress With Suriya That Prove They Are A Match Made In Heaven!

New Information from NCCN on Most Common Type of Cancer; Diagnosed in Millions Every Year

Android 12 is now rolling out to Pixel phones