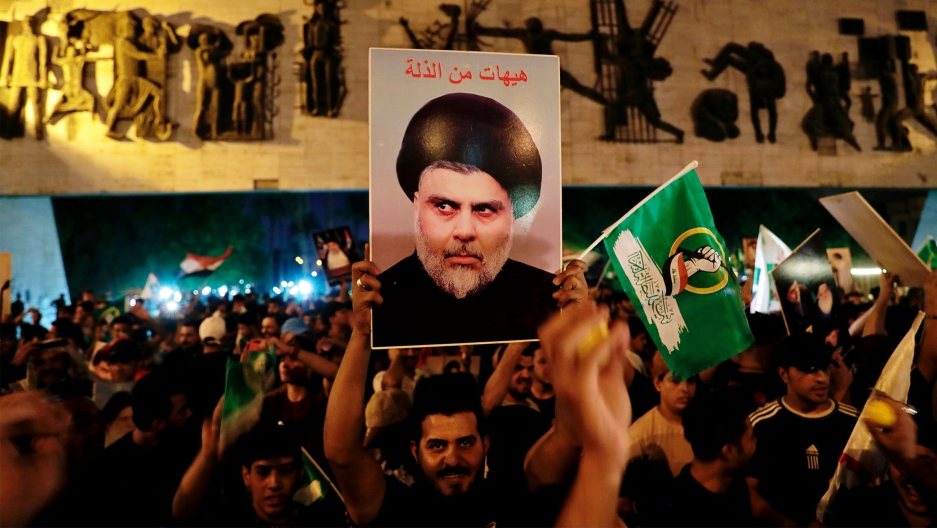 Iraq
Moqtada al-Sadr’s party has won the most seats in Iraq’s parliamentary elections. The firebrand cleric is known for his resistance to US-led forces during the 2003 invasion. Sadr and his aides have refused to meet with American officials. He welcomed all embassies into the country on Monday “as long as they do not interfere in Iraqi affairs or the formation of a government.” His nationalist views also put him at odds with Iran. And pro-Iranian groups have questioned the legitimacy of the results. Sunday’s election was marked by a record low voter turnout of 41%. The election, set for 2022, was held early in response to anti-government protests that started in 2019.

Nigeria
Six women and nine children abducted by Boko Haram in Nigeria have managed to escape from captivity. They met with Borno Gov. Babagana Zulum in the state’s capital, Maiduguri. The former hostages had been kidnapped in two separate incidents last October. The women and children hiked for six days through the forest and were finally discovered and taken to safety by security forces. The UN says that the Boko Haram extremist group has abducted more than 1,000 children since 2013.

Ethiopia
Rebels say they’re holding their ground as the Ethiopian army launches coordinated attacks on all fronts against the Tigray People’s Liberation Front. The TPLF says the army is using artillery, tanks, jets and drones, though the Ethiopian government has not yet confirmed the fighting. The offensive ends a ceasefire that was declared in June. The 11-month conflict in Ethiopia’s Tigray region has left thousands of people dead and another 2 million displaced, sparking a humanitarian crisis that’s created faminelike conditions, according to the United Nations.

India will soon roll out a DNA vaccine for the coronavirus. It’s the latest example of how COVID-19 is transforming vaccines.

The pandemic has shown how a tiny virus can turn the world upside down, but it’s also ushering in a new era of science that many hope will help combat other deadly infectious diseases.

One kind of genetic technology that has been in the works for decades — DNA vaccines, which use engineered DNA to induce an immunologic response — is finally making its debut for widespread use on people in India this fall.

Not all youth soccer players have the same opportunities. These Iowa clubs try to shrink that gap.

Sam Gabriel, director of the Genesis Youth Foundation club, who came to Iowa as a refugee from Liberia, created a program so kids could have a level playing field, both in soccer and in life.

We’ve all heard about Neanderthals, our shorter, stockier humanoid cousins who died out roughly 40,000 years ago. Lots of Neanderthal bones have been found in Europe, as a chilly climate there helps preserve fossils. There are also plenty of well-financed European institutions to study those bones. But scientists are starting to realize that when it comes to ancient species of humans, Southeast Asia might actually be a much more interesting place. 🎧

The US is grappling with its identity today. Is it Columbus Day or Indigenous Peoples’ Day? Or neither? Depends on where you live. In Spain, there’s little doubt — Columbus Day is a massive celebration, referred to as the National Day of Spain. This year in Madrid, the right-wing government is spending more than $1 million on a two-week long festivity with dozens of events. Also, Poland has ruled that its constitution takes precedence over EU Law. That has raised the possibility of Poland leaving the 27-nation bloc. Or, more likely, a standoff over whose law reigns supreme. And, whether it’s called soccer or fútbol, the sport unites immigrant children in the US from diverse backgrounds. Yet, it doesn’t always provide equal opportunities for all of the kids.

Under Radar: Rhiana Yazzie’s show “A Winter Love” Shows Couples of All Races and Celebrates Self-Love

White House snarks about lack of choice amid supply crisis