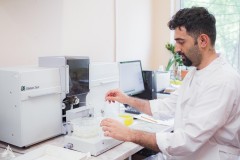 Scientists of the Academy of Biology and Biotechnology. D. I. Ivanovsky SFU Together with colleagues from Iran, they developed a method for cleaning wastewater from dyes using sunlight and graphene. The new technique is low cost and does not require special equipment. This was reported today by the press service of the university.

One of the main pests that pollute water bodies are polycyclic aromatic hydrocarbons (PAHs). These are persistent organic pollutants with pronounced carcinogenic characteristics, which are often used as industrial dyes. The scale of world production of such dyes reaches 450 thousand tons per year. This raises concerns among experts, given that substances of this type are often toxic and can provoke cancer and mutations.

According to AB&B SFedU scientists, in recent years, many specialists have resorted to the use of solar energy to treat wastewater on an industrial scale. The advantages of this approach are low cost and easy availability.

The scientific team of the Southern Federal University (SFU), together with colleagues from the Institute of Science and Technology of Color and the University of Tehran (Iran), has developed a new method of water purification from dyes, which is distinguished by its high efficiency and economy. It is based on graphene nanocatalysts activated by sunlight.

“Our cleaning method is as effective at breaking down persistent contaminants as titanium dioxide in use today and is able to neutralize more than 90% by volume of some textile dyes. At the same time, the technology we have created for the production of graphene nanosheets is simple, cheap and completely environmentally friendly,” – said the leading researcher of the Academy of Biology and Biotechnology. D. I. Ivanovsky SFU Mahmoud Mazarji.

The specialist explained that under the action of sunlight, graphene nanoparticles form oxidizing radicals that bind molecules of harmful chemicals. As a result of this reaction, concentrated pollutants are converted into relatively harmless carbon dioxide and water.

The new cleaning method is designed to be implemented in an existing infrastructure. The technology for creating nanocatalysts involves graphite oxidation followed by hydrothermal reduction and calcination in a nitrogen atmosphere. The nanocatalyst can be reused and sent for recycling, so it can be used, for example, during tertiary treatment at municipal wastewater treatment plants.

“Today, there are already production facilities focused on the creation of graphene materials in huge volumes. Therefore, we hope that our development will find application in practice in the near future,” – noted Mazarji.

Study published in the journal Nanomaterials, was carried out within the framework of the grant of the Ministry of Science and Higher Education of the Russian Federation No. 075-15-2021-1363. In the future, scientists plan to develop a similar technique for cleaning soils contaminated with PAHs.

In Krasnodar, film critic Alexei Dvoeglazov will discuss the film “Passengers of the Night” with the audience :: News

Delivery of corn: the first ship with grain left the port of Odessa :: News

FSB urges pilgrims to the countries of the Middle East to be vigilant and careful with religious literature :: News