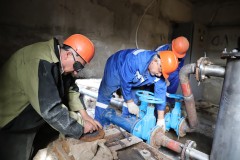 In Sochi, over the past week, about 150 emergency situations were recorded that occurred on the infrastructure of the water utility. All of them concerned the reliability of the systems that provide the population and guests of the resort with clean drinking water, as well as the uninterrupted functioning of communications for the disposal of untreated household and industrial wastewater. This was reported by the press service of MUP “Vodokanal” in Sochi.

“There were no emergencies at the strategically important pumping water supply and sewerage stations of Sochi, as well as treatment facilities (OSK). All facilities are operating as normal, fully guaranteeing safe and comfortable living conditions for the city’s population,” the press service said.

According to the Situation Center of the Sochi Vodokanal, following the results of the past seven days, the most ruptures occurred in the pipelines of the Central, Lazarevsky and Khostinsky districts. The emergencies were local in nature. In addition, they worked out in the shortest possible time. We note in particular that more than 80% of all accidents have been eliminated without large-scale shutdowns from water supply.

We express our special gratitude to subscribers who report gusts discovered in the city. Thanks to this relationship, the enterprise receives additional information about the health of the infrastructure and allows you to quickly respond to emergency situations.

At the same time, we appeal to representatives of the Criminal Code, Homeowners’ associations, housing cooperatives, etc. With the onset of the autumn-winter period, the “rainy season” traditionally sets in at the resort, and some yards can be locally flooded. However, it is not necessary to open sewer wells in order to drain storm water. They are not designed for this, they can simply fail and provoke large outflows. In return, it is better to take care in advance of the availability and effective performance of storm sewer systems.

A resident of Rostov-on-Don wanted to sell boots via the Internet and lost money :: News

In the Black Sea there is a ban on catching mussels :: News