The Košice Online portal published a report on carp chasing in a pool full of chemicals. Seventy children from the ŠKP swimming club took part in the special pre-Christmas training.

To make it fair for everyone, the coaches divided them into several age groups. Each group caught its own carp, then everyone gathered at the last one at once. Several animals were exposed to stress in front of a bunch of children who wanted to pull themselves out in front of trainers and journalists.

“Fortunately, we have a lot of children this year. There were almost seventy of them, so we divided them into groups. Everyone caught their own carp and everyone caught the last one. Especially the first carp was very alive and it was only the second time in our history that it managed to swim to the big pool. It was even more difficult for the children, but they managed it.” one of the coaches Radoslav Sabol boasted for Košice online.

The hunters themselves were also very happy.

“We caught it together, so we’ll share the carp. He slipped away from us a few times, but we finally managed to get him to shore. We’ll see what we do with him, but I’d let him swim in the river,” said the swimmer, who probably didn’t realize that this would mean even more suffering for the carp. 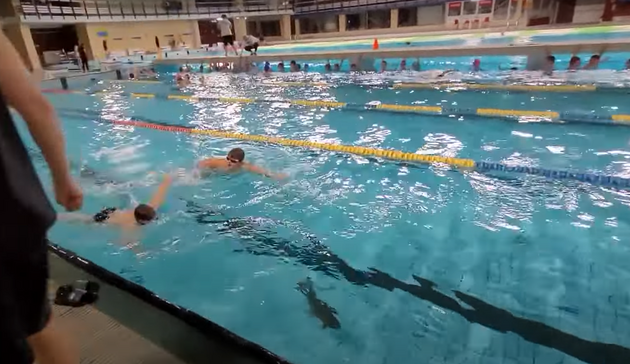 They will immediately run for carp.

As it turned out, the Christmas carp drive has been a long-standing tradition in the ŠKP swimming section.

“I personally have been fishing for carp in the pool for more than thirty years, but our head coach Juraj Skála would probably confirm that this tradition started when the club was founded. And he is already celebrating sixty-two years of activity. The only exception was probably last year, when there was a pandemic and the pool was shut down,” the coach let himself be heard.

Several children are chasing after the animal at once.

When he described the pre-Christmas swimming tradition, he probably had no idea what a commotion the Košice website’s report would cause. Already under the article itself, a number of Slovaks spoke up, according to which it is barbarism.

“Why didn’t you send the children to the lake to fish? That would be more fun,” one of the readers recommends coaches.

“It is very inhumane behavior towards fish. I would have whoever came up with this try something similar to what those fish are experiencing. I hope that it will be solved by competent people and this accepted custom will be abandoned,” another one is added, and other discussants even point out that the “police sports club” is hiding under the abbreviation ŠKP.

However, the strange tradition has moved people beyond the borders as well, the case is being noticed by various groups of activists who are calling for an investigation.

Video: Touching meeting of General Pavel. After 30 years with the French commander, who saved