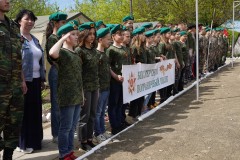 Photo: Border Department of the Federal Security Service of the Russian Federation for the Rostov Region

The guys are determined to enter military schools after receiving certificates, but they have not yet decided which branch of the military to choose. Fortunately, there is still time, as well as for preparation.

High school students from the Rostov region came to the gathering “Young friends of the border guards” in the Neklinovsky district. The guys have already decided that they will serve in the Russian Armed Forces. They have not yet decided on the troops, but they already believe that serving the Motherland is their calling. Employees of the Border Department of the Federal Security Service of Russia in the region offered the children to get acquainted with small arms and throw a grenade. Of course, there was a field kitchen and other joys of military life, the Vesti TV channel reports. Don”.

During the event, loud shots were heard on the territory of the training complex of the FSB PU. It was the participants of the meeting “Young friends of the border guards” who competed in shooting from an air rifle. Not everyone managed to hit the target, but not a single projectile flew past the target.

“This year we managed to collect the majority. Not everyone, however, came. Not everyone was able to take part. But most schools sent representatives. The main task is the military-patriotic education of the younger generation. Much attention is paid to this by the services of the FSB, and, in general, by federal agencies,” commented Vladimir Evtyukov, official representative of the FSB Directorate for the Rostov Region.

While the guys mastered the obstacle courses, threw training grenades and worked at the tables for disassembling and assembling a Kalashnikov assault rifle, in the field kitchen, the border guards were already preparing a dish for the brave and courageous guests. They were fed porridge made from stew and buckwheat. There was a delicious break, and after the competition continued again. At the next stage, the specialists taught schoolchildren to properly provide first aid to the victims.

Curiously, there are many girls among the participants of the rally. They were not inferior to the guys at all and also quickly rushed to victory.

This year, about 120 people decided to take part in the rally. These are 10 detachments, which are formed on the basis of schools and lyceums of the Rostov region. Young people dream of going to military schools. And many of them are recognized until they can decide on the direction. Therefore, they came here: to try themselves in various tests and understand which military specialty is closer to them.

MDV air conditioners: what is important to know :: News

5 Reasons to Download Pokerdom on PC: Pros of a Poker Room :: News

HOW TO GET RID OF THE ADDICTIVE HABITS :: News