Ms. Pavlova, as far as I know, you decided to join the army in high school. What drives a teenage girl from the countryside to do this?

I grew up in a village and there were either only boys or only children around me. I therefore had two options: Take care of the children and do mischief. The first one led me to want to be a kindergarten teacher, but when I went to the talent auditions, I failed in singing. The examiner told me that he couldn’t see my vocal range, so that was not the way to go.

So did the boys way win?

Then they came to the school from the recruitment center looking for boys to join the army. I did sports, I also had a driver’s license for a small motorcycle from the age of fifteen, I went shooting, running. I therefore thought that the army could be interesting for me, it also made sense to me that the job brings something, similar to raising children. So I went that route.

So you went into uniform relatively early. Did you miss the usual girlish concerns, what to wear in the morning, how to paint yourself?

I went into uniform at the age of eighteen, after high school. But even at the military school, the girls painted themselves, and although we had a year of basic military service, we also had our personal lives and our free time. If we didn’t get angry. (smile)

You stayed in hostels, barracks. There must have been a lot of men around you all the time. Did you get a lot of attention from them? Did it ever get on your nerves?

Not exactly. Since I was surrounded by boys since childhood and had more boyish hobbies, such as hockey, climbing trees or playing soldiers, I didn’t mind the boyish environment at all.

You emphasize that as first lady you would like to advocate for improving the status of women in society. Does it come from your experiences with a strongly male environment? Do you have any bad experience in this regard?

Yes I have. But I think it’s like that everywhere. For example, in universities, there is always a so-called nerd. That is, a person who interprets a woman’s behavior differently than he should, and perhaps has the impression that she is sending some signals towards him, even though this is not true. So, of course, I encountered it, I fought it with dignity, and in the future I would like to give women an impulse and a guide to the fact that they must not let everything be liked. And this applies especially to single mothers, who are the most vulnerable. 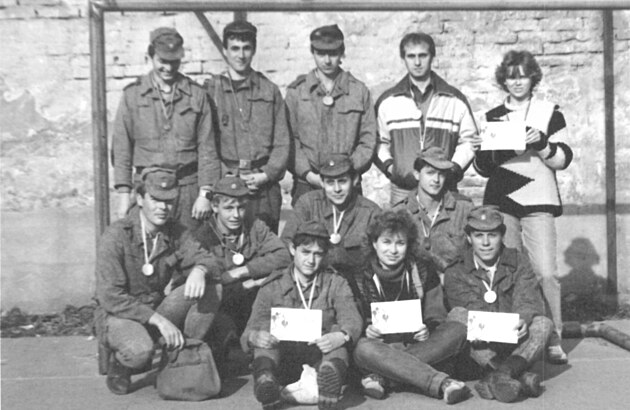 Do you remember the exact moment you met your husband? Did it catch your eye at first sight?

I remember. We met in 1986, shortly after I returned from basic military service. It was in Prostějov, all of us young and new lived there in a military dormitory. We met there for the first time, but then our paths diverged professionally, we each went to study and work elsewhere. But then we both returned to Prostějov, met again and started talking. And we hit it off.

Who approached whom first? Did Mr. General ask you out?

It was mutual. We just met somewhere in the yard on the sidewalk and it was like: What are you doing here? That was our first date. Then we also met a lot at work, our professions intertwined in different ways, which made us have more fun. Then we went to sit down for a beer, a coffee and it continued. And it continues to this day. (smiles)

Is Mr. General a romantic? Because we all know him more as a man who tames emotions.

It’s good for him that he can control his emotions, considering what he’s been through. And in my opinion, there is a bit of romance hidden in every man. 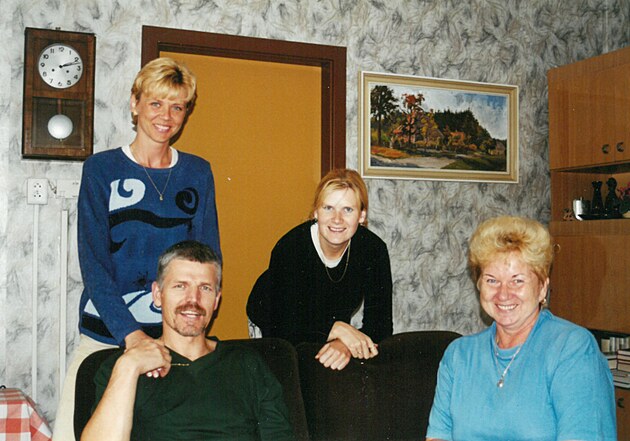 Husband and wife Pavlovi and family

When you and your husband watch a movie in the evening, is it more of a romance or a war drama? Speaking of which, do you have a favorite war movie?

Not at all! Certainly not war films, we mainly like comedies, Czech and foreign. The husband also likes to watch action movies, while I prefer something that calms me down, so we try to find a compromise and agree on what we both like on TV. And we still like detective stories. For example Hercule Poirot or Columbo, that’s exactly for us.

Who is the bigger general in your house? Husband or you?

This question has been asked several times. We both have it the same. We both wear trousers here.

And what kind of husband is he in private? Will he cook something for you, or do you have to remind him that he is a brothel, as is the custom in many households?

No, I don’t care about that at all, especially after all these years. The husband knows that order is needed. As well as order and peace! (laughs) We try to follow it at home. And when it comes to cooking, on the contrary, I’m the one who doesn’t want to let him into the kitchen, because then he’ll throw my spices around.

Do you give him fashion advice? All his life he was used to wearing a uniform as a general, suddenly it’s a debate, meeting, photo shoot, filming…

He could never be consulted much about fashion, because he has his own style and never let anything dictate it. He is his own in this direction. Now the team only occasionally advises him on it. 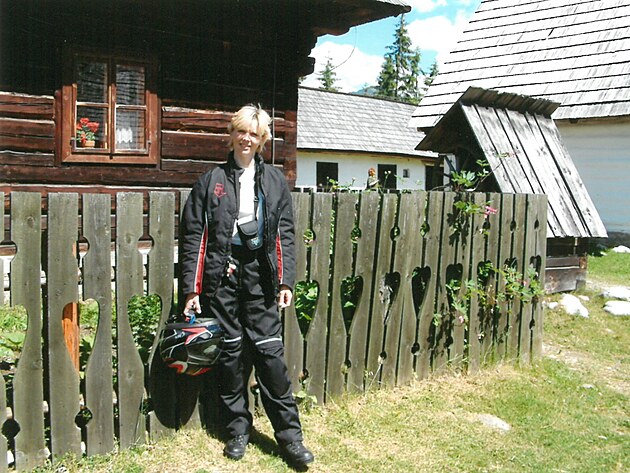 Eva Pavlová is an active motorcyclist, she got her first driver’s license at the age of fifteen.

I know that two years ago you had a rather serious health problem. How are you feeling today? Have you and your spouse considered whether it is appropriate for you to face the stress of a presidential campaign?

I underwent thyroid surgery because I had a malignant tumor on it. It’s been two years, I’m currently under the control of doctors and taking medication. At that time, the husband really thought about whether he would run for office or not. It depended on how I recovered. From the beginning, I didn’t join the campaign just to set up a quiet line. Now it’s alright. It is true that there has been a bit of stress lately, but it is not limiting in any way.

And how do you compare with the increased public and media attention towards you? Do you enjoy it or is it something you are not looking for?

You’re right, it’s something I’m not looking for. And the truth is that until recently it was relatively cool, but now that the election is approaching, quite a lot of media has been dumped on us. It’s not exactly a comfort zone, we’re not very used to it and I’m not at all.

Have you experienced any downright unpleasant situation? Maybe at the autograph booth, some opponent of your husband?

Not a downright unpleasant situation. But I met people who didn’t know why they should vote for a husband, so I started talking to them, and they ended up being nice. But I didn’t encounter anything really bad. 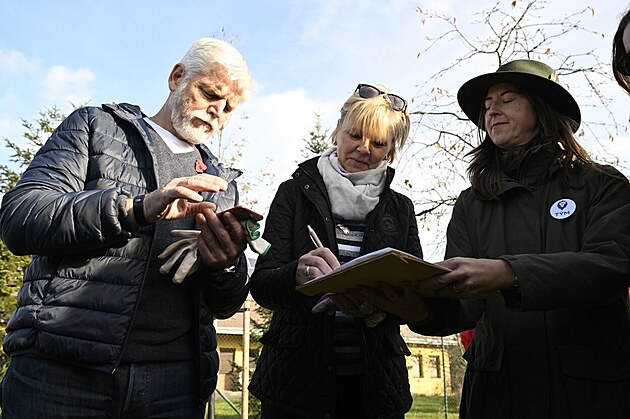 Your husband’s and your past in the KSČ are widely disputed in the media. How do you compare to that?

It’s certainly annoying for us. It was thirty-three years ago, and I thought that society had come to terms with this topic. We ourselves had a problem coming to terms with it, in short, we lived in a certain time, and that time was such that we were naive in college and believed in certain things. It’s hard to understand in retrospect, even for us. Of course it also bothers me when people pick on us, although we were in the party for a short time and we worked for the army and the defense of the country, we didn’t hurt anyone.

Some candidates like to declare that if they were elected president, they would certainly not live in the chateau in Lány. How are you and your husband doing? Would you move there, live in Prague Castle or stay at home?

We didn’t think about it. The question has already been asked a few times, but I always said that we would deal with the situation only if it arose. The first thing would be to talk about what will happen to Prague Castle, what the plan will be, what it should look like there and of course make it accessible. Then when we would deal with housing.

Is Prague Castle a topic that you would like to take under your wing as the first lady? If I say stupid, take care of him?

Well, you are right that it is usually the woman who manages the household. But this is a really big household, so it will require experts. (laughter) 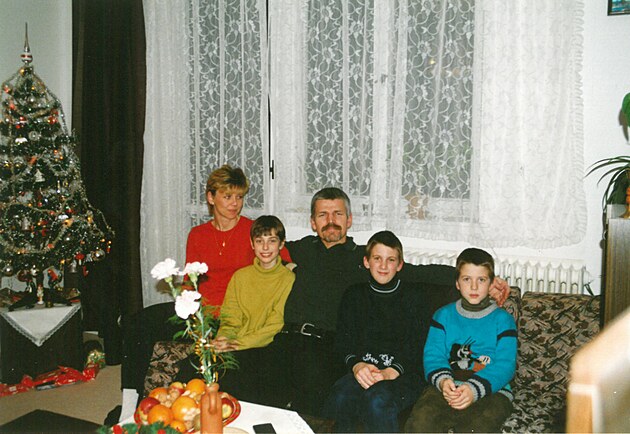 As a woman who knows Mr. General best: Name one quality about him that would make people vote for him because he would be a good president?

The first thing that comes to mind is definitely his life experiences. If you ask me about a quality, then I will say that he is an honest man.

Poláček from SuperStar on MMA and cooperation with Tyson: Mike is a beast, I would like a fight

Installation of the second line completed at the liquid oxygen plant in Nevinnomyssk :: News