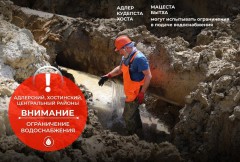 Residents will face water interruptions due to workers.

In Sochi, there was a major gust on the main water conduit, which runs along the White Acacia in the Adler region. The situation is regarded as pre-critical, since the network with a diameter of 800 mm is of strategic importance in the issue of supplying resources to the vast territories of the Adler, Khostinsky and part of the Central region. This was reported today by the press service of MUP “Vodokanal” in Sochi.

Experts have already found out the cause of the incident. It turned out to be works that the local developer deliberately resumed, sternly ignoring the numerous demands to stop them from representatives of the water utility. The developer was informed in advance and ignored information about all the detrimental consequences that would follow when construction resumed, as well as the scale of another accident for urban infrastructure.

We emphasize that these works are inconsistent with the management, including the city authorities and departments. At the moment, an operational headquarters has begun work at the Sochi water utility, whose members will be engaged in determining the situation and eliminating the consequences caused by the outburst. The situation was taken for round-the-clock monitoring.

During the emergency works, the pumping stations of the main water intake of the Adler district will be stopped. As a result, residents of Adler, Kudepsta, Khosta, as well as the microdistricts of Matsesta, Bytkha, Svetlana, s. Razdolnoe and part of the center of Sochi will experience interruptions in drinking water.

“Given the volume and complexity of the work, it is not possible to announce the approximate time frame for eliminating this situation. The population of the above-mentioned areas will be provided with water through the circulation of water tankers,” the press service noted.

In Shakhty, a man dealt in synthetic drugs