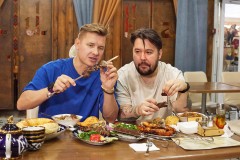 October 1 in 10:00 on the STS travel show starts100 places to eat» with a restaurateur Alexander Belkovich. The new project will be released on Saturdays immediately after the most rated culinary program on Russian TV ProSTO Kitchen with his participation.

The presenter will go on a culinary tour around the country to share the recipe for the perfect weekend and draw up a gastronomic map of Russia. Alexander will visit atmospheric establishments, tell you where to spend the night and what to see, show you unique routes and unusual sights.

“I always wanted to be helpful and open in the kitchen, which was realized in the “Prosto Kitchen”. And now my second dream on TV has come true! After all, the main reason for my travels has always been food. The new show is incredibly informative and rich! We have collected all the best in the city to give the viewer a wild appetite and a great desire to visit these places”, – shares Alexander Belkovich.

In the new show, Alexander will also enjoy sunsets on the shores of the Baltic Sea in the company of grape snails, learning to surf, staying overnight in the cabin of the legendary Vityaz ship, the largest extreme park in the country, the city of the future Innopolis, the Samara brewery, the only hotel in Russia right at the stadium and much more.

I have a cell phone under the counter, and when it’s not on, I tweet: Was Nerudov bored during the debate?

Ivan Trojan’s grief: After the collapse of his marriage, he lost his beloved father (†90)