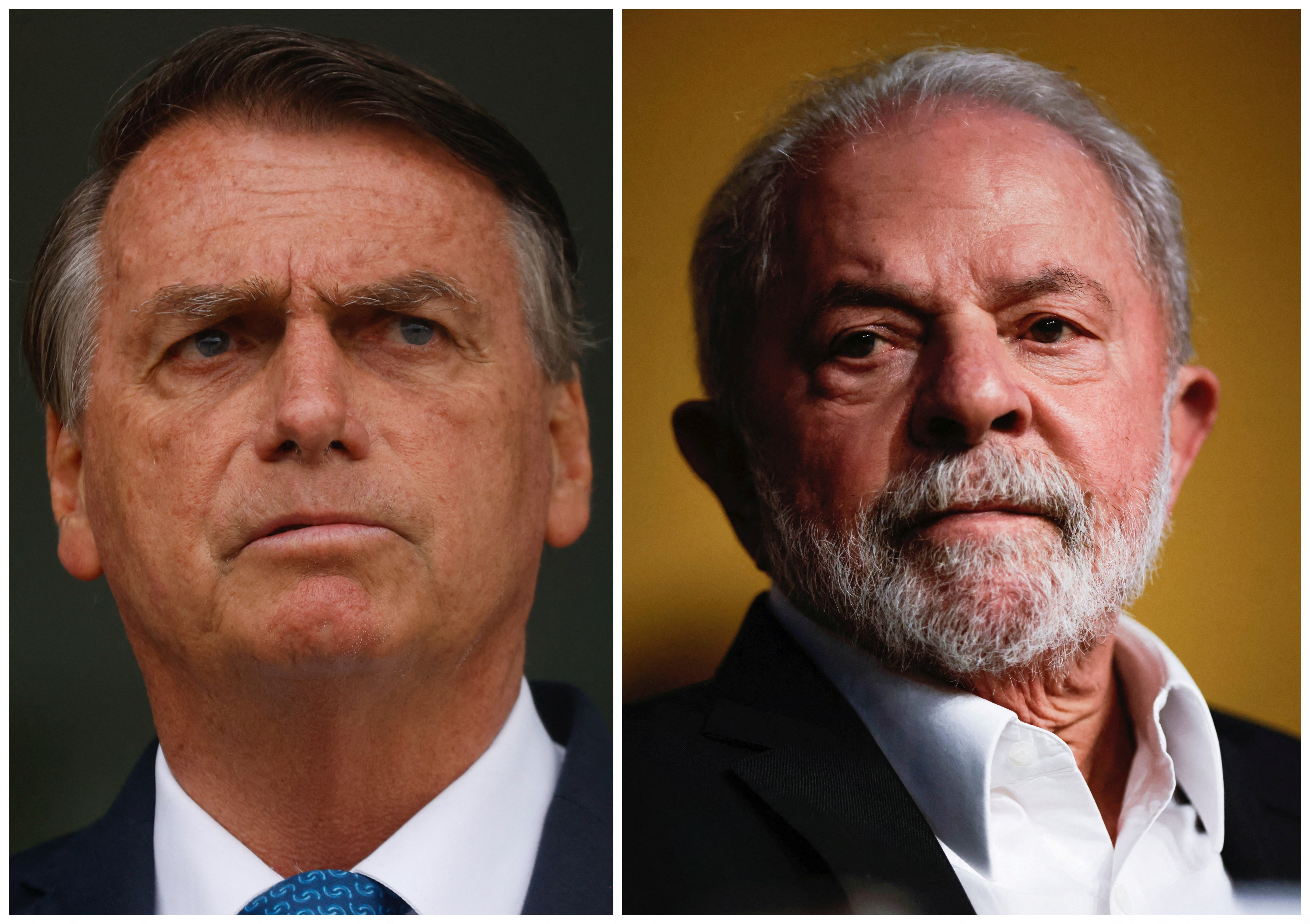 On October 2, almost 120 million Brazilians voted in the first round of their presidential elections. A Jair Bolsonaro, a right-wing populist who has been president since 2019, fared better than expected. For months, the polls had given his rival, the leftist former president Luiz Inacio Lula da Silva, commonly known as Lula, a double-digit lead. In the end, Lula got 48% of the vote, while Bolsonaro got 43%. They will now go to a second round on October 30.

Although Lula’s campaign focuses on convincing Brazilians that they were better off when he was president and that Bolsonaro is a threat to democracyBolsonaro has tried to present Lula as a radical socialist and himself as the savior of Brazil. Both candidates have concentrated their campaigns in the richest and most populous states of São Paulo, Rio de Janeiro and Minas Gerais. Bolsonaro has hinted that he is unlikely to accept the result if the election goes against him.

Lula and Bolsanaro were the only candidates who obtained more than 5% of the vote. Lula hopes to inherit most of Ciro Gomes’ votes, a center-left former state governor, while Bolsonaro is banking on voters of all stripes changing their minds as stimulus spending makes the economy look brighter. Women, who prefer Lula, and evangelicals, who favor Bolsonaro, will play a decisive role in the final result.

Last Friday, Bolsonaro and Lula exchanged accusations of drunkenness and cannibalism, respectively, in a charged hostility in the campaign towards the presidential ballot on Sunday the 30th. 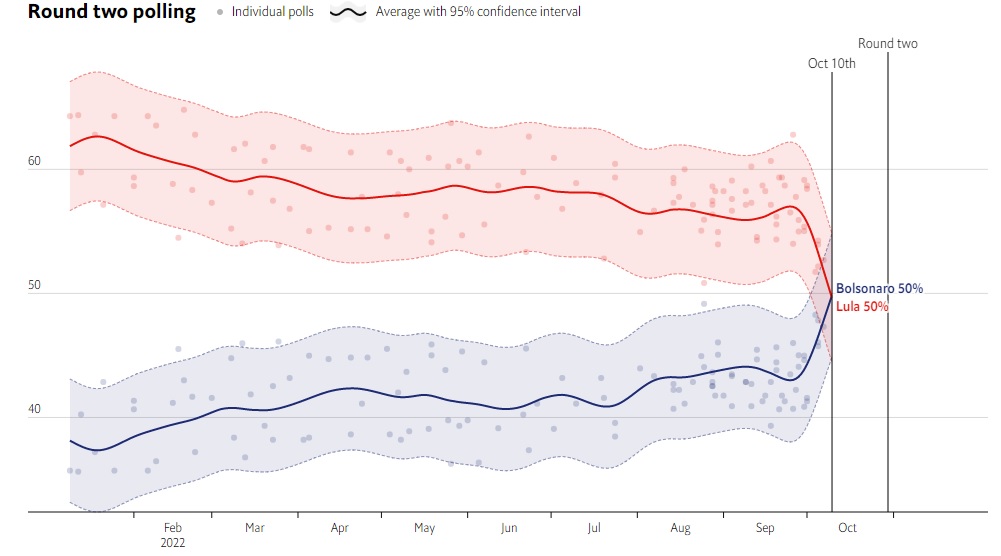 Second round poll: the gray dots are the individual polls and the red and blue lines are the average with a 95% confidence interval (Graph: The Economist)

The dispute, which is already the most polarized in recent decades in Brazil, again entered negative territory when former President Lula (2003-2010) broadcast a television advertisement with excerpts from an old interview in which Bolsonaro claims he would eat human flesh.

“It is to eat, it is cooked for two or three days and they eat it with banana. I wanted to see the Indian being cooked. There they tell me ‘if you see it, you have to eat it’. I eat it!” says the president in the video fragment of an interview with the American newspaper New York Times in 2016.

In the excerpt, the then federal deputy Bolsonaro refers to a supposed ritual of the yanomami indigenous communityfrom the state of Roraima (north).

A spokesman for the Yanomami, Junior Hekurari, denied to an independent local media the existence of the ritual of cannibalism in that culture.

But the video has gone viral in recent days on social networks and Lula’s campaign has included it in a television propaganda space, in an attempt to stop Bolsonaro after his surprising performance in the first round of the presidential election.

The ad, which includes a succession of images with other acts and outbursts of the president, shows him simulating a machine gun with a tripod, calling a deputy a “tramp” and making fun of covid-19. 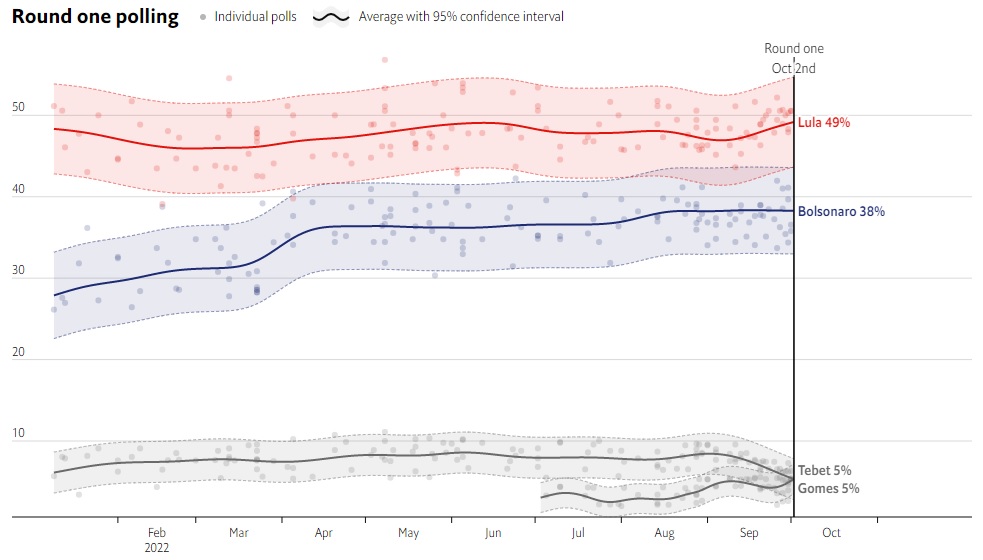 First round poll: the gray dots are the individual polls and the red and blue lines are the average with a 95% confidence interval (Graph: The Economist)

“After all the absurdities that Brazil has already heard from Bolsonaro, another even more terrifying one emerges: he reveals that he would eat human flesh; Brazil can’t stand Bolsonaro anymore,” says a voice off.

Communications Minister Fábio Faría, and one of Bolsonaro’s campaign coordinators, promised on Twitter that they will appeal the announcement to the electoral authorities.

Lula marches ahead in the ballot with 53% of the valid votes compared to 47% for Bolsonaroaccording to a survey by the Datafolha Institute released this Friday.

Pollsters face questions for underestimating Bolsonaro’s electoral strength in the first round, when he scored more than six points above the maximum expected by the polls.

The “anything goes” of the electoral campaign in Brazil: between Satan and cannibalism
The new strategies of Lula and Bolsonaro

Shocking statistic: One in five Americans is mentally ill

Pugacheva doomed herself to suffering with a fatal act

Armed forces of Ukraine tried to hit the Antonovsky bridge