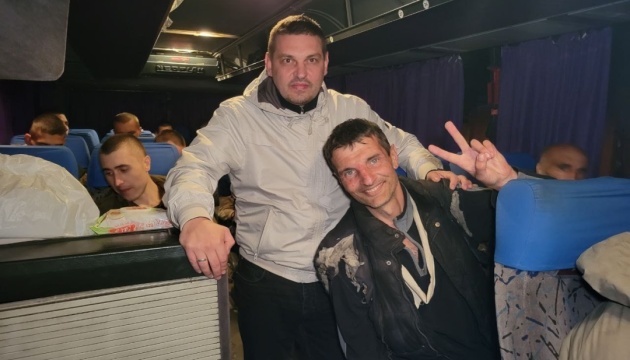 Ukrainian Ambassador to Turkey Vasily Bodnar, who was present at the release from captivity of five Azov commanders in Turkey, spoke about their condition, conditions of stay and Turkey’s role in the exchange process.

The diplomat shared the details in a comment to Ukrinform.

“It is clear that our guys suffered a lot, that the conditions of captivity were unbearable, because they were very exhausted and lost weight, but they demonstrate strength of mind and insubordination. If we compare them with what we saw in the photographs, the video from Azovstal before leaving the plant, then the difference is great. But I think that over time they will gradually recover, all the necessary conditions will be created for this,” the diplomat said.

The commanders of “Azov” will remain in Turkey, in a special status and under personal security guarantees from Turkish President Erdogan.

“The guys definitely need to go through rehabilitation, they will be provided with all the necessary medical and psychological assistance so that they can recover from what they have experienced,” said Vasyl Bodnar.

According to him, the Turkish side is very responsible and cordial.

“Before the evacuation of defenders and civilians from Mariupol, incl. foreigners, the Turkish side was ready in April, but the Russian side did not allow this plan to be realized then. Now the Turkish side is showing itself very responsibly and hospitably, the military has everything they need,” the diplomat said.

“In Ukraine, we are sensitive to any contact of our partners with the aggressor country. But how else can you ensure the exchange of prisoners. Turkey is our friend and partner, and it is good that it was the official Ankara that took on the difficult burden of a mediator. Therefore, one should judge by deeds and results. I think that President Erdogan and his team deserve the highest praise. The efforts of the Turkish side have brought significant results, and I believe that they will continue to make even greater efforts in the future,” said Vasily Bodnar.

The diplomat noted that since the beginning of the war, Turkey’s position has been aimed at achieving peace, and the country’s leadership is trying to contribute to this through diplomatic means.

“Like the grain agreement, the exchange of prisoners in Turkey is seen as a move towards peace. I repeat that this is the vision of Turkey. We also strive for peace, but in our understanding, peace is the liberation of territories. From our point of view, without the liberation of the territories, achieved either at the negotiating table, or the withdrawal of troops, or we will knock them out by force, it is impossible to talk about peace. The President of Ukraine clearly described everything in his speech at the UN General Assembly. Nevertheless, Turkey’s aspirations in no way contradict ours,” the ambassador said.

As Ukrinform reported, earlier Turkish President Recep Tayyip Erdogan said that the September 21 exchange of prisoners between Ukraine and Russia is an important step towards ending the war, and efforts in this direction continue.

The West must understand the new reality, said the Russian Foreign Ministry

Exercises on a log: Why wooden houses from Russian builders in Europe are ready to buy, despite the sanctions