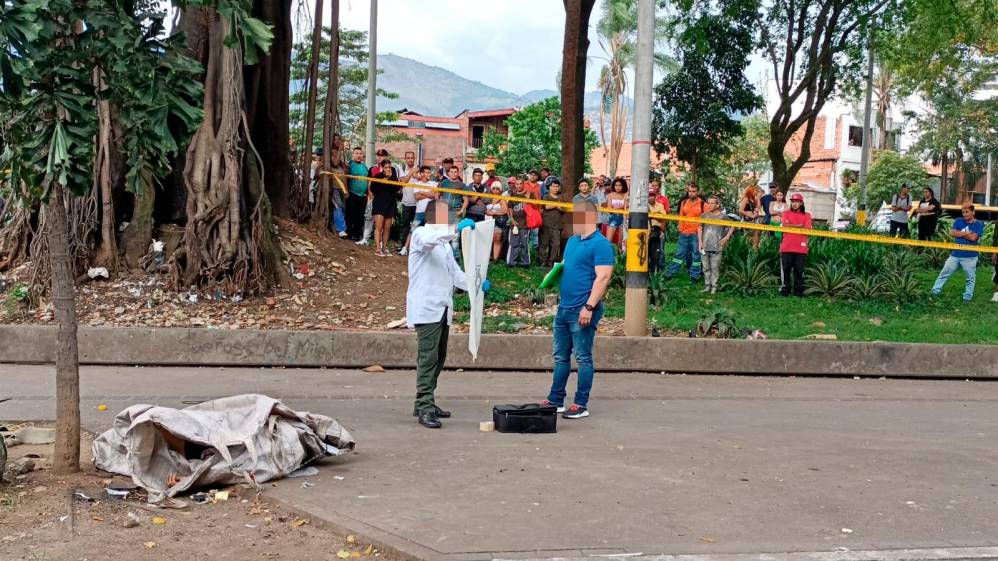 Witness versions suggest that it would have been a street dweller who would have abandoned the victim’s body in the middle of a public thoroughfare in the center of Medellín. Photo: private file

A new case of a bagged body found in the middle of a public road has shocked the inhabitants and authorities of Medellin, Antioquia). The body, which was found inside a sack, covered in sheets, was found on the afternoon of last Friday, October 7.

The authorities of the capital of Antioquia informed the newspaper El Colombiano that, according to initial inquiries, the body -which corresponds to a man-, would have been abandoned in the Plazuela de Zea around 8:00 on Friday morning by a man who was passing through the sector with a cart.

However, the Medellín police would not realize that the content of the sack was a human body, until 3:00 in the afternoon of the same day.

Although the authorities still do not know the identity of the man, the agents of the Sijín of the Metropolitan Police informed El Colombiano that the victim, He had several stab wounds all over his body..

You can also read: More details are known about the death of Helena Laserna, granddaughter of the founder of the Universidad de los Andes: she had bruises on her body and was cremated

The Sijín agents also estimated that the victim would have between 45 and 50 years of age. To clarify the causes of death and the identity of the man, the body was left under the jurisdiction of the Institute of Legal Medicinewho will be in charge of advancing the respective forensic work, as the Antioquia newspaper learned.

Meanwhile, Blu Radio learned that the Sijín Police team is compiling the videos of the security cameras of the sector due because, according to witnesses, it would have been a street dweller who abandoned the body of the victim in the Zea Square.

Although at the moment no person has been arrested for the alleged homicide, the newspaper El Colombiano obtained information that, hours after the body was found, Sijín agents found the cart in which the victim was transported in a sector known as Calle de Los Locos.

With this new case, according to the authorities of the capital of Antioquia, There are already 25 bodies abandoned on public roads that have been found in the Valle de Aburrá so far in 2022.

You can also read: “Colombia and Spain will continue to work with President Petro in the fight against drug trafficking”: Ambassador of Spain

It should be remembered that this is not the only case of this type that has occurred in the department of Antioquia in recent days. In the early morning of last wednesday 5th of octoberThey were found two bodies bagged in the municipality of Bello, north of Valle de Aburrá.

The bodies of the victims, identified as Jean Carlos García Vargas, 21, and Jonathan Arley González Serpa, 24, They were found inside two black bags, around 1:00 in the morning on Wednesday.

“More or less on the date of October 5, the family alerted her because they did not know her whereabouts, there we began to investigate and everything at this time is part of that process. which is currently being advanced”, detailed the commander of the Metropolitan Police of the Valle de Aburrá, General Carlos Humberto Rojas, in dialogue with Blu Radio.

The young, it seems, they would have been killed by a group of people who kidnapped them, and was extorting money from their relatives. To date, the facts are the subject of investigation.

Armando Benedetti referred to the regulation of drugs: “Either alcohol is prohibited or nothing is prohibited”
Governors will present to Gustavo Petro their proposals for the National Development Plan

Helicopter destroyed an underwater drone of the Armed Forces of Ukraine, aimed at the frigate of the Black Sea Fleet

Gunmen opened fire on 7 people in Zacatecas, in the midst of searching for the escaped prisoners from Cieneguillas

What zodiac signs love dogs the most