The show recovers the figure and voice of Carlos Gardel at the Teatro Avenida, and features the presence of Ariel Ardit, Ana Fontán, Néstor Fabián and the Orquesta Aeropuertos Argentina 2000, made up of 45 young musicians and directed by Néstor Tedesco

In the imposing setting of the Teatro Avenida, recently reopened after the pandemic stoppage, the show debuted last night Forever Tangoin which three generations of artists give themselves the experience of singing and playing with the great figure of citizen music of all time, the Creole Thrush Carlos Gardel.

The projection of a hologram on the set allows Gardel to appear at the door of a bar. From the stalls the illusion is complete, the figure is presented standing and simulating life size. We have it there, before our eyes, at the dark end of the supply. 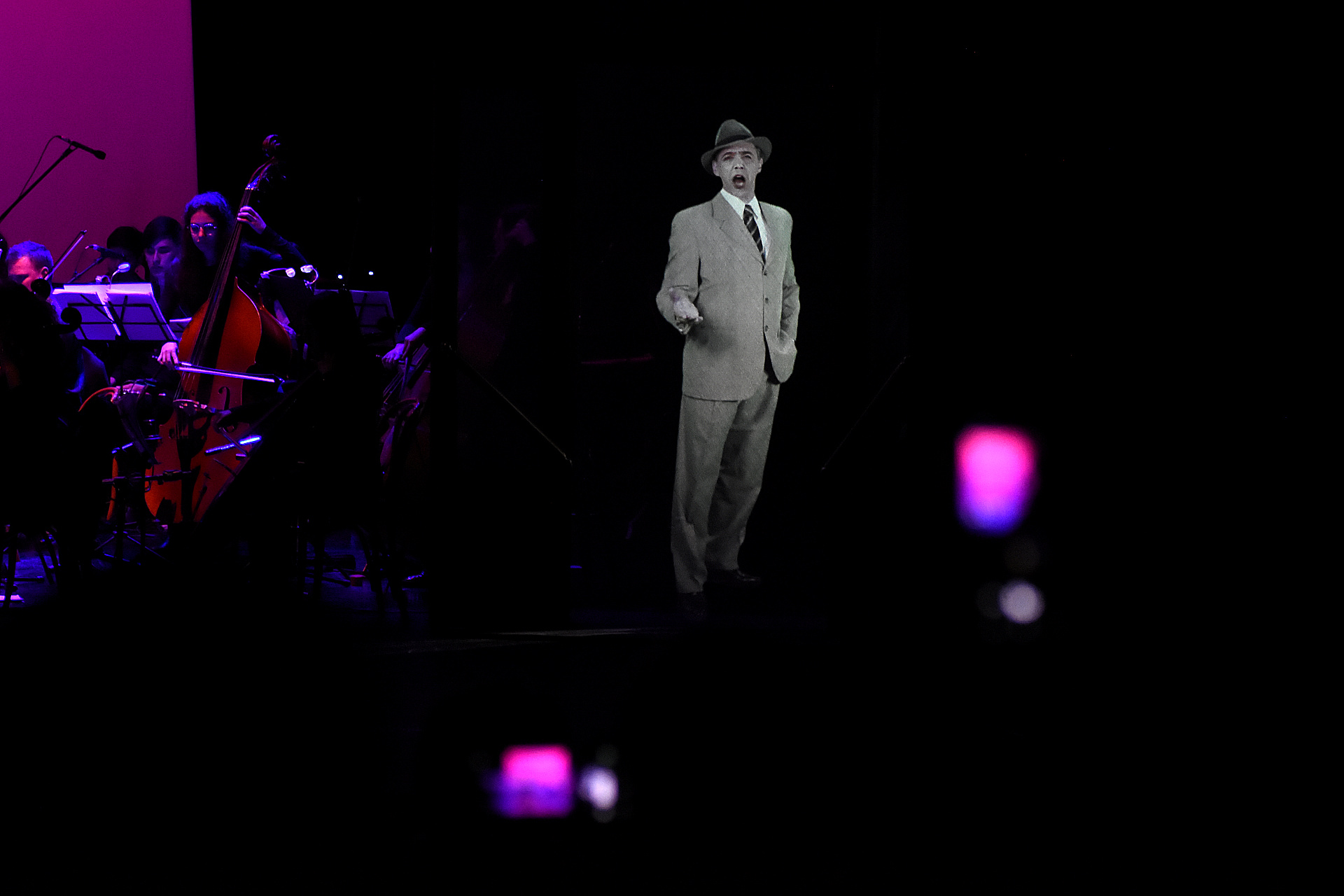 The projection of a hologram on the set allows Gardel to be seen in his splendor (Credit: Nicolas Stulberg)

The other two pillars of the show are no less unique than this possibility that technology gives us, it is on the one hand the Argentine Airports Orchestra 2000made up of 45 young musicians between the ages of 15 and 22, led by the director Nestor Tedescooffer us their work in symphonic key from the repertoire Gardelian among other classic pieces of tango from different periods and authors. This orchestra emerged from the initiative of the businessman Edward Eurnekian It is made up of young people from vulnerable neighborhoods such as Villa 31 in the city of Buenos Aires, who have the possibility of carrying out their musical training through scholarships and competitions under the mentorship of Maestro Tedesco. The show will have two new meetings, on Friday 7 and Saturday 8 October.

For this show, the orchestra also has the participation as guests of two experienced musicians from contemporary tango: Andres Linetzki on the piano and Ramiro Boero in the first bandoneon they bring tango pulse and great experience accumulated from a very young age in these more than twenty years of development of tango in the 21st century. 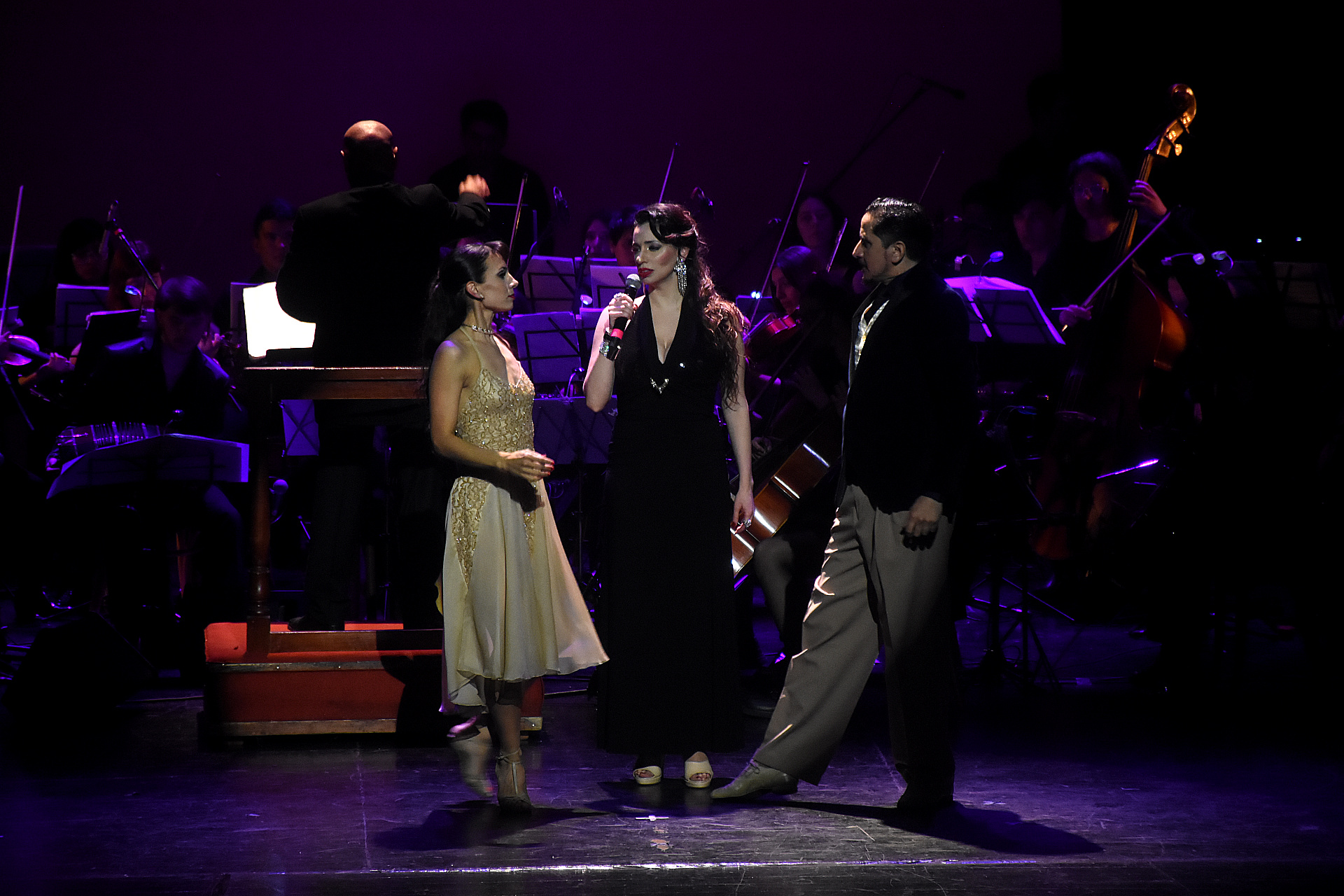 The cast is completed with the presence of the three singers who exchange their turn with the figure of Gardel: Ana Fontan, singer, actress and dancer with a great career in the field of tango company theater shows. the all terrain Ariel Ardit, who with his image as a national singer performs both on big stages and in milongas on the independent circuit. Both still young but experienced share the poster with one of the veterans of tango who continues to work with great vitality, Nestor Fabianwho in each of his appearances with brief speeches and references tries to establish a bridge between the Buenos Aires of yesterday, of which he was the protagonist in his childhood as a large part of the public and the youth present both above and below the stage.

A few minutes after 9:00 p.m. and with the room full, an official opening potpourri and the full orchestra opens the show. Immediately afterwards, for the first time that night, the figure of Gardel appears greeting the orchestra and to introduce the public to the keys of the show. 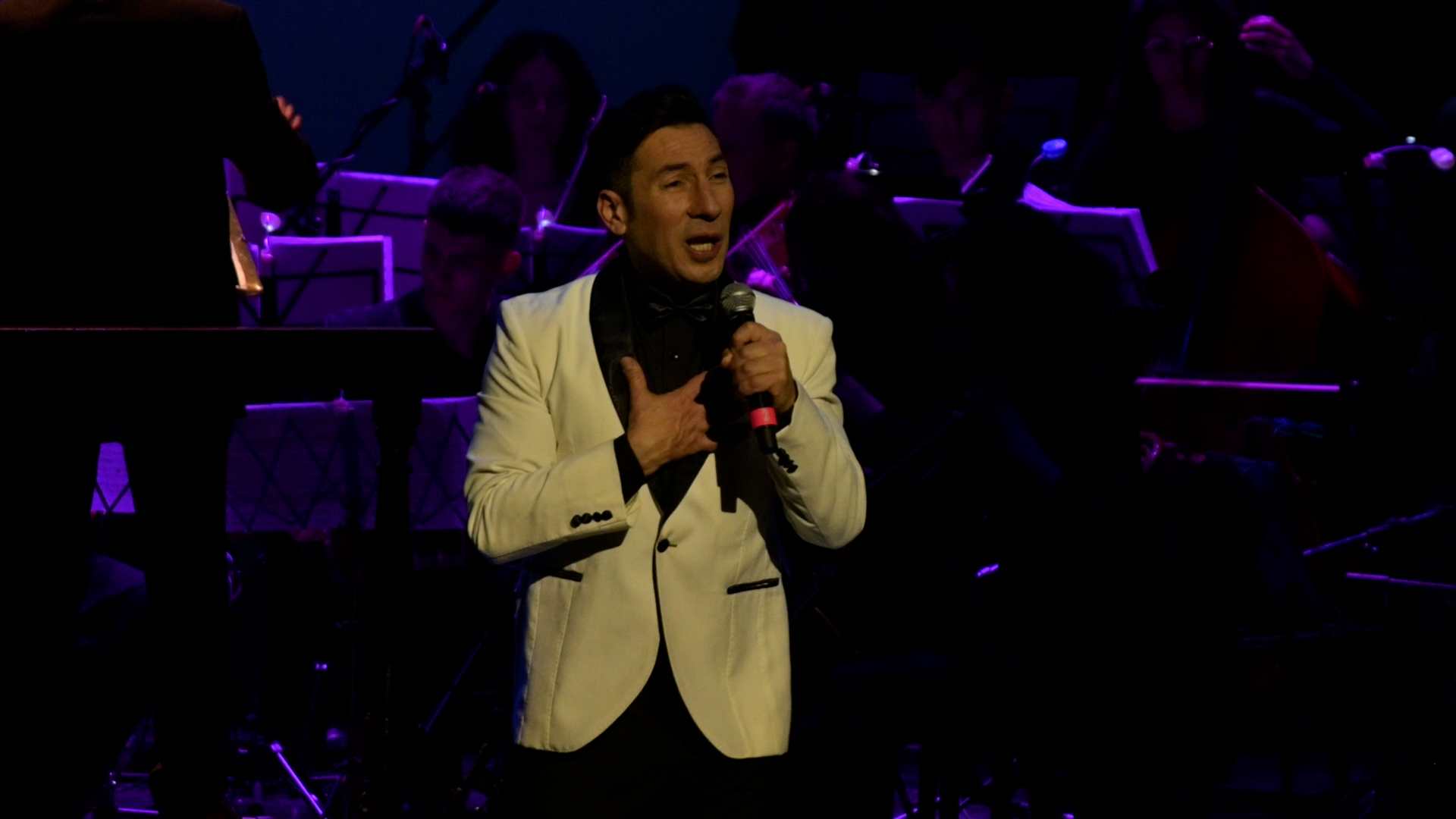 Ariel Ardit, the great figure of the national singer of these times

As in any tango musical show, there is no lack of couples of dancers, who then make their first appearances, providing a great display of tango dance on stage to the rhythm of Dancerfundamental piece of who was nicknamed the biggest bandoneon of Buenos Aires, Anibal Troilo “Pichuco”. In a little over an hour and a half of show, the three pairs of dancers intersperse their appearances with the singers, change their costumes and, always within what is known as stage dance tango, they work styles more on the floor and marked with the Yumbaor more canyengue with The Cumparsite.

Then comes the first voice of the night, it’s about Ana Fontanwho in each of his appearances makes use of his acting skills to interpret the tangos according to their character, providing drama or mischief as in the case of The corna tango melody from the end of the 19th century, with the lyrical updating that it provided Enrique Santos Discépolo in 1947, when the musical genre was much more than that, it was the same atmosphere in which people lived in the neighborhoods of the big Argentine cities, being national. In most of the show, Fontán works on the figure of aunt Merello and other divas from the golden ages of tango and national cinema whose images are projected on a giant screen during a potpourri that includes the brunette, Pipistrella Y Where is a mango? celebrate ranchera Francis Canaro and Ivo Pelay, launched in 1933, during the greatest global economic crisis of the 20th century. Towards the end of the show, Fontán moves away from the suburban picaresque register to give heartfelt interpretations of the cumparist Y Goodbye Nonino. 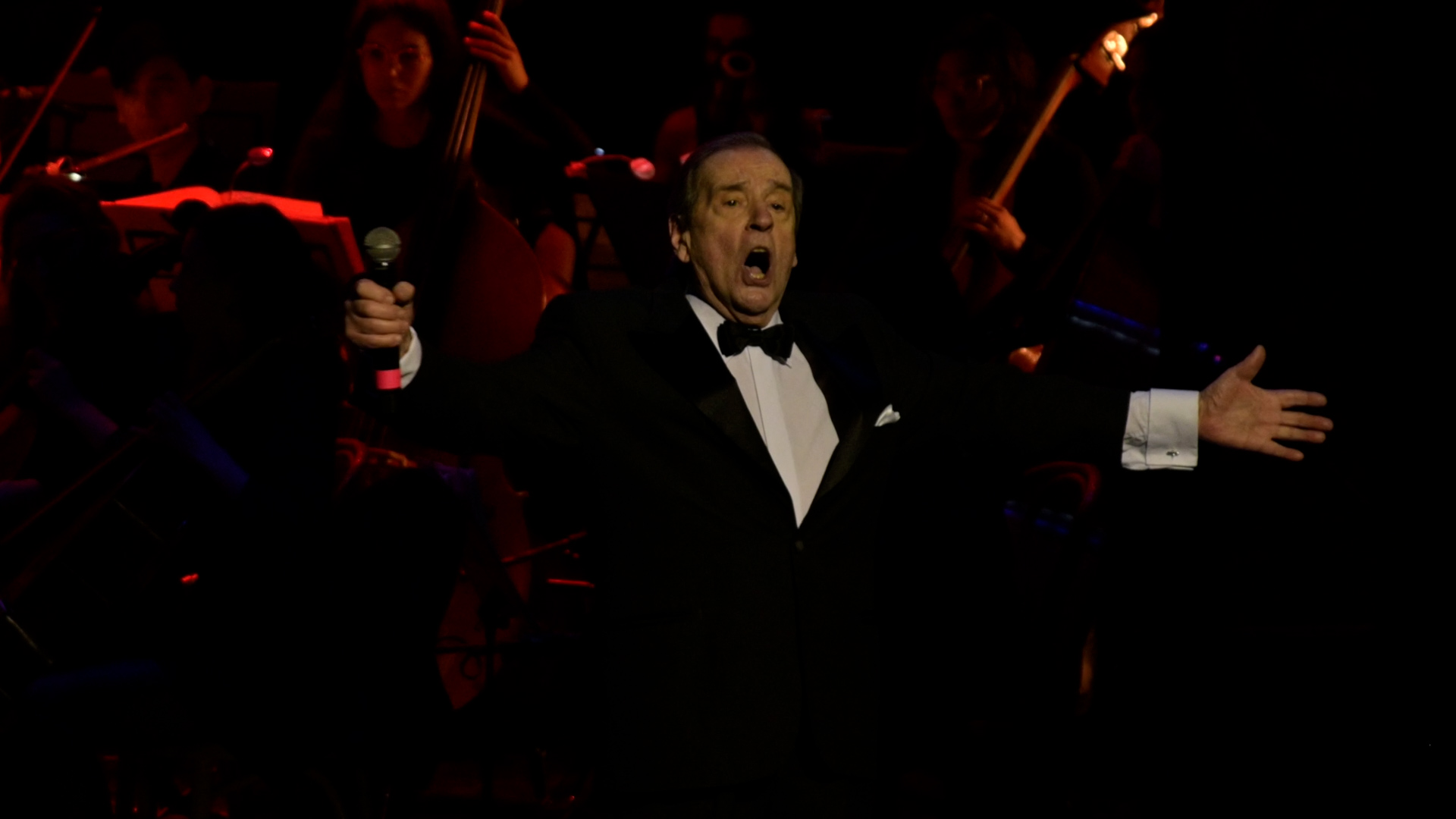 Nestor Fabian got the ovations of the night

The figure of Carlos Gardel succeeds the lady, with the interpretation of Che Bartoloclassic lunfardo with centennial lyrics Enrique Cadicamo and the young orchestra has the pleasure of accompanying him. The ensemble sounds very tight and the illusion of artists and audience becomes a reality thanks to the great work of the digital producer Sergio Neuspiller. Gardel’s participation alternates the register of the suburb of Che Bartolo Y Hand to hand with the Chanson Française.

comes the turn of Ariel Ardit, Cordoba by birth and Buenos Aires by adoption who began his path in tango in a mythical venue of the Buenos Aires underground, El boliche de Roberto in the Almagro neighborhood. From those geographies so frequented by the specter of Carlos Gardel, Ardit went out into the world and established himself as the great figure of the national singer of these times. My dear Buenos Aires, Downhill, The day you Love Methe entire repertoire Gardelian of the show is naturally in charge of his voice, alternating with Carlos Gardel himself. 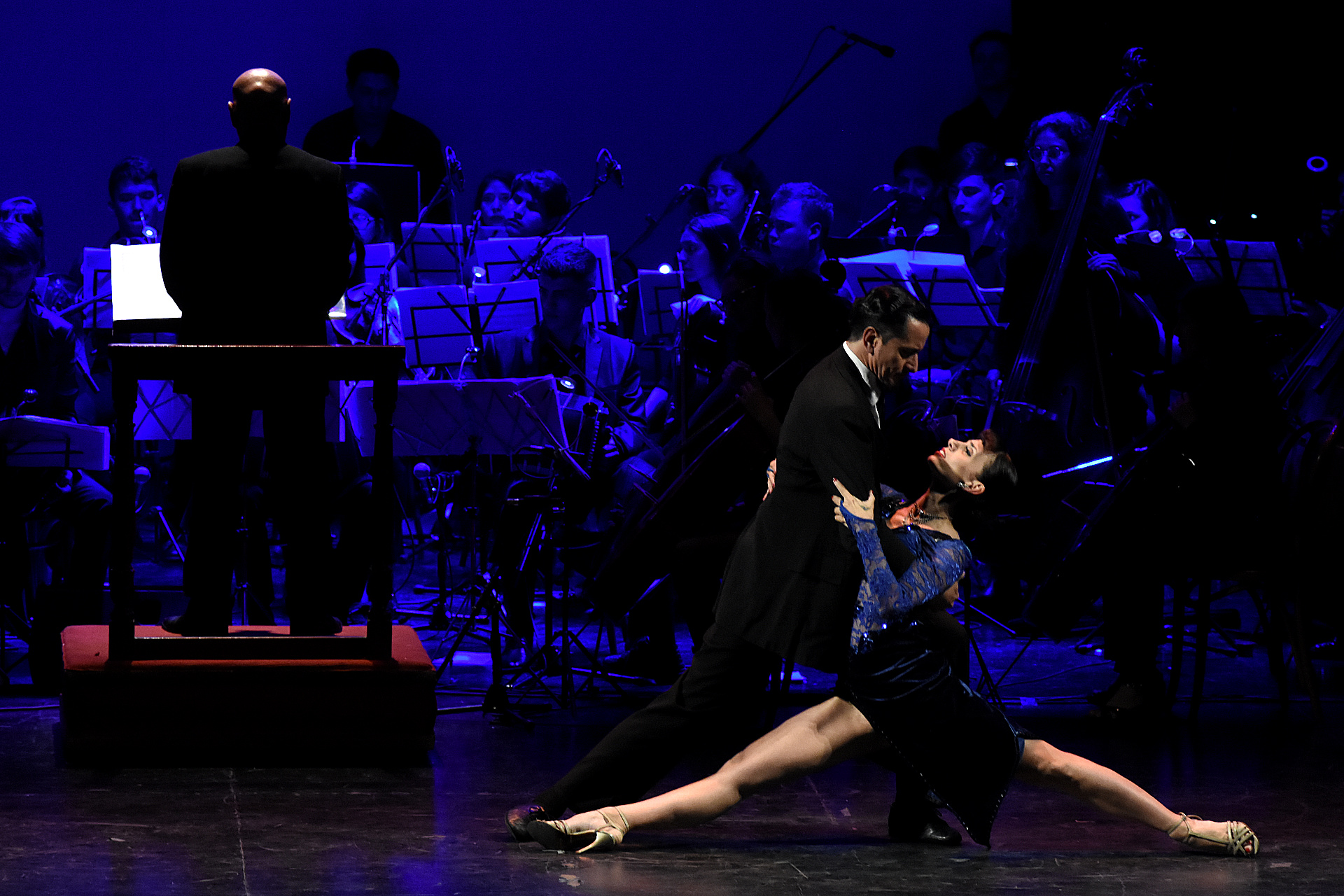 Separate paragraph for the octogenarian singer Nestor Fabian, who got the ovations of the night. Praised by his young colleagues on stage, Fabian shines in the repertoire of the author who gave impetus to his career in tango: the master Mariano Mores. Sings One de Mores and Discépolo, walks around the stage, looks the first plate players in the eye and raises his gaze to the boxes. Later, she returns to show off with the beauty of grisel and the public is moved and moved with a charismatic version of a jewel of the sixties Ballad for a crazy by Ferrer and Piazzolla takes us back to those years of avant-garde youth.

Towards the end, the morocho from the supply returns to warn us that it’s late but not so late that he gets to play his luck in one last race at the racetrack, his other passion besides music. He says goodbye with By a head and the entire cast of singers joins in to sing it with him.

* “Forever tango” will be presented again on Friday 7th and Saturday 8th of October at 9 pm. at the Avenida Theater (Av. de Mayo 1222, CABA).

Museo del Tango “Carlos Gardel”: a “utopian” idea that has already generated controversy over its venue
The Spaniard who came to Argentina for love, separated and chose to stay to give tango classes
Tango World Cup: 20 photos of the final gala that consecrated two Argentine couples

Latest news about the situation around Ukraine on October 11, 2022: What Ukrainian border guards do when they drink, and why Melnyk’s son does not protect his homeland

those fleeing the call are ballast