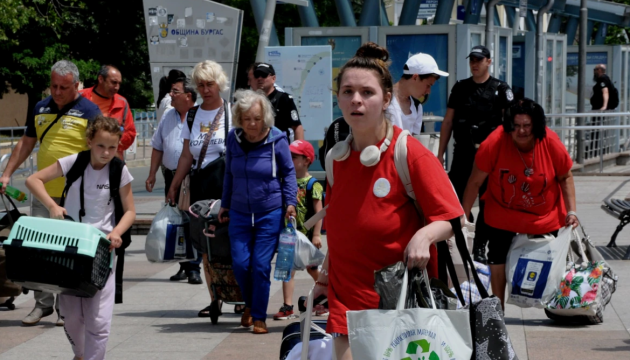 The working group on the protection of the rights and freedoms of Ukrainian citizens who are on the territory of the EU member states and other states as temporarily displaced persons held its fifth meeting.

This is stated in the message. Office of the Vice Prime Minister for European and Euro-Atlantic Integrationreports Ukrinform.

It is noted that the meeting was co-chaired by Deputy Prime Minister for European and Euro-Atlantic Integration Olga Stefanishina and Minister of Social Policy Oksana Zholnovich. The meeting was also attended by representatives of the central executive authorities and people’s deputies, in particular Yulia Grishina, Pavel Sushko, Elena Shulyak and others.

The participants discussed the current problems faced by Ukrainian refugees abroad; recognition of Ukrainian digital documents by EU member states; providing citizens of Ukraine with the documents necessary for legal stay in the EU member states, as well as for returning to Ukraine; And so on.

Stefanyshina briefed the participants on the results of her meeting with EU Commissioner for Home Affairs Ylva Johansson. She stressed that the system of temporary protection for Ukrainians in the EU will work until the spring of 2024.

“Citizens of Ukraine can return to Ukraine and back to the territory of the European Union. But in case of a long-term return, citizens must de-register in the EU and re-register in case of return,” she said and noted the importance of additional communication regarding security conditions in Ukraine when returning citizens to their homeland.

Stefanishina’s office added that, for their part, the people’s deputies presented an analysis based on the results of their monitoring visits to European countries. As noted in the report, the most common problems that citizens of Ukraine apply to diplomatic missions and consular offices are: the restoration of lost documents, the preparation of documents for returning to Ukraine, the extension of the validity of a passport, the inclusion of children in a passport, issues of notarized powers of attorney.

Read also: Ukraine will strengthen cooperation with the EU within the framework of the European Migration Network

The parliamentarians also focused on the importance of providing our citizens with Ukrainian literature, especially for children, opening Ukrainian cultural centers, as well as providing the highest quality distance education. The participants agreed to hold a separate meeting of the working group to discuss issues related to the beginning of the academic year.

The Minister of Social Policy spoke about the work on the preparation of legislation to address the issue of recognition abroad of guardianship of Ukrainian citizens over children.

Considering the increased workload on consular offices due to the mass exodus of Ukrainian citizens, the meeting participants agreed on the importance of maintaining and strengthening the staffing of consular offices abroad. At the same time, Stefanishina stressed the need to maximize the involvement of the UN agencies, charitable foundations and other partners.

“Work in this direction is already underway so that UN agencies can help in key countries,” the Vice Prime Minister said and invited MPs to maintain an appropriate level of communication with the UN on this issue, in particular through parliamentary friendship groups.

During the meeting, the Ministry of Digital Transformations informed about the continuation of the dialogue with the EU countries on the cross-border recognition of Ukraine’s electronic documents.

As reported, according to the UN Refugee Agency, after the start of a full-scale invasion by Russia, Ukrainians more than 10 million times crossed the state border to leave.

whoever wants to help Ukraine in Poland, let him go there!