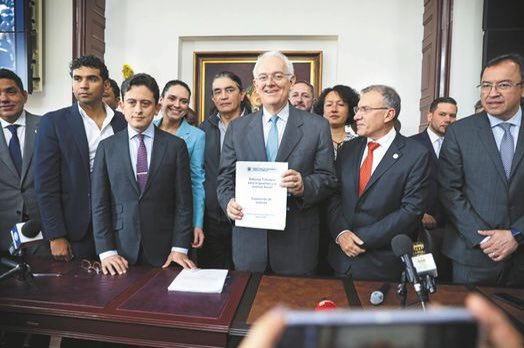 Reference image. The Minister of Finance, José Antonio Ocampo, presented the text of the tax reform project on August 8 in the Congress of the Republic. PHOTO: PRESIDENCY

In the late hours of Monday night, October 31, the document of the tax reform was filed, which will be debated in the plenary sessions of the Senate and the House of Representatives. The National Government made great socialization efforts with the different sectors to evaluate the proposals that should be changed or eliminated with respect to the initial presentation. In this process of more than 2 months, the government project underwent several modifications, with the purpose of reaching the majorities that this initiative needs to become a law of the Republic.

Initially, the collection projected by President Gustavo Petro and the Minister of Finance, José Antonio Ocampo, was 25.9 billion pesos. A figure that they insisted on, repeatedly, was not negotiable. However, after being submitted with the refusal of several benches, including the government, the bill was approved in its previous debate with a goal of $22 billion. But With the modifications made in the last week, the tax reform seeks to be approved to reach a collection of 20 billion pesos.

The senator Gustavo Bolivar confirmed the filing of the paper and added that it is expected to be discussed tomorrow, Wednesday.

Tweet by Gustavo Bolívar about the filing of the tax reform. Photo taken from @Gustavo Bolivar

The most recent controversy surrounding the tax reform it has to do with the possibility of the increase of bread. The National Association of Bread Manufacturers (Adepan) said that some of the inputs used for the production of some products such as liberals, cookies, roscones or churros are included in the list of ultra-processed foods, so these products could go up to $300.

After the approval in the first debate and with the opposing positions of benches such as the U party, Conservative, Radical Change and Democratic Center, President Gustavo Petro announced last Wednesday that The pensioners of the country will no longer be recorded. Initially, the tax reform sought to tax, through income tax, pensions over $10 million.

Another important variation refers to the mining-energy sector. The initial consideration of the National Government considered a surcharge of 10 percent for companies dedicated to the exploitation of hydrocarbons, this percentage reference would go down during the following years until reaching 5 percent. A measure adopted by the government in the framework of the energy transition.

However, with the change made to the presentation of the paper, consider a margin ranging from 5, 10 and 15 percent, depending on the price of international markets. Well, if it is high, it is taxed with the surtax of 15 percent and if the hydrocarbon price is reduced, its percentage margin of taxation is reduced.

In particular, this is a measure that did not go down very well in the sector, as associations such as Fedesarrollo and the Colombian Oil and Gas Association ensure that royalties in the regions would cease to be received the way it happens today, plus they would be forced to pay higher taxes.

Secondly, free zones will be taxed with a weighted tax, but that will have a differentiation of internal and external marketing. Decision that made the tax regime for companies in the country more flexible. According to Minister Ocampo’s explanations, the tax on sales abroad will be set at 20 percent, while sales in the domestic market will be taxed at 35 percent.

The filed document eliminated, as an object of taxation, churches that carry out ritual, cult or religious activities. However, the commercial activities of the churches are linked to paying a 20 percent tax.

Party of the U asks to eliminate tax on churches in the tax reform
Government yields in new points of the tax reform: benefits are maintained for the free zones of the country
Diosdado Cabello welcomed Petro and dispatched against Iván Duque

A Ukrainian shelter welcomes bears rescued from the front areas