The Argentine national team fell surprisingly before Saudi Arabia at its premiere at the World Cup Qatar 2022. The 2-1 defeat made a deep impression on the squad after a first half with the result in their favor added to three goals disallowed for offside. And the passing of the hours would have detected a serious irregularity in the use of the VAR that prevented him from extending to the Albiceleste the initial advantage.

Ruggeri recalled the last time the Argentine team started losing in a World Cup: what message would he give the squad

The former captain compared the loss against Saudi Arabia with the defeat against Cameroon in Italy 90. He stressed that “it was not played well” and pointed out what were the “fatal minutes” against the Asian cast

Before the quarter of an hour, the cast of lionel scaloni he was already ahead on the scoreboard. the slovenian referee slavko vincic penalized a penalty for grabbing Leandro Paredes at the behest of technology, which was in charge of the Dutch Paul Van Boekel. The execution of Lionel Messi changed the maximum penalty per goal after nine minutes of the game.

A dozen minutes later, the use of the tool came into action again to guarantee the offside charged to Lionel Messi in an action that ended with the team captain’s goal. This move would be correctly annulled in favor of the Saudi team that kept the game until the great controversy of the duel came.

The best memes of Argentina vs. Saudi Arabia with goals disallowed due to offside and VAR as protagonists

At 26, Alexander Papuan gomez leaked a ball in three quarters of the field against the direction of Lautaro Martinez. The Inter Milan forward picked between Hassan Altambakti and Saud Abdulhamid to define from above before the goalkeeper leaves Mohammed Al Owais. However, the VAR went back into action. 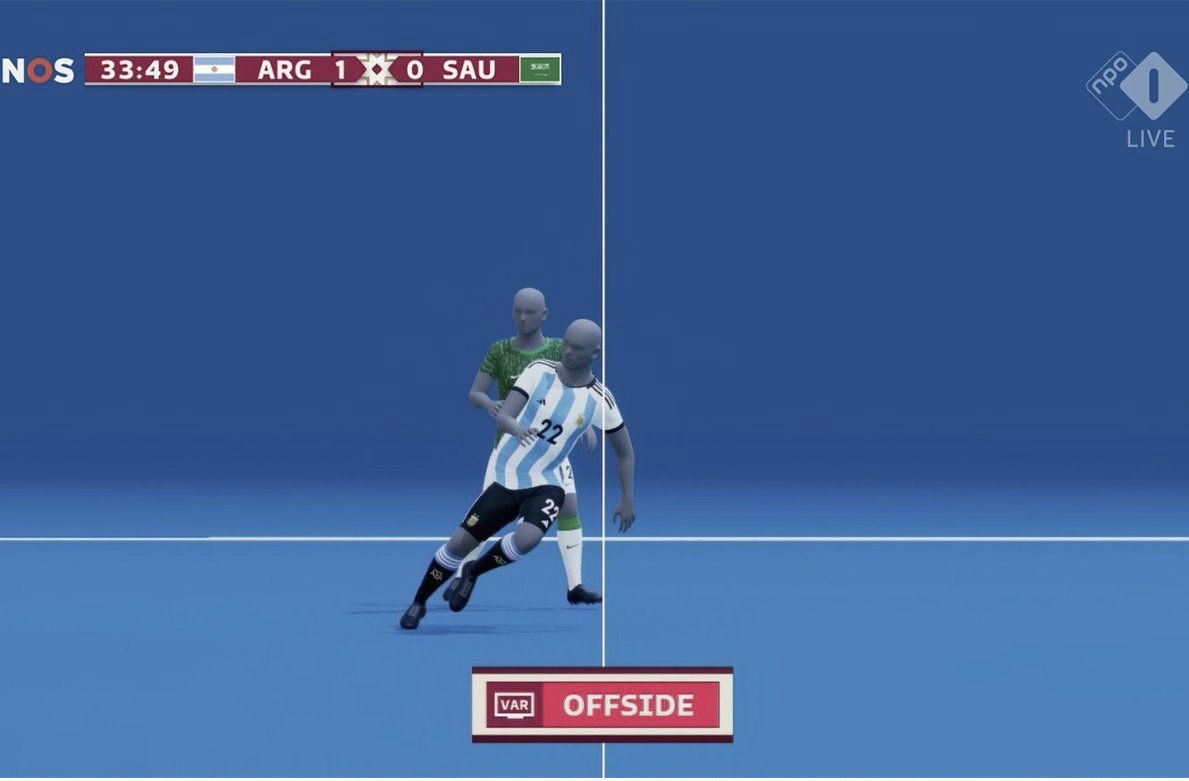 The automatic offside signaled that Lautaro Martínez was ahead

The referee in charge of controlling the offside was the Algerian Abdulhak Etchiali, who made a mistake that could have changed history. The judge referred to Abdulhamid to establish the last line of defense. In that position, Lautaro’s shoulder was offside according to the automatic tool to measure his location.

The coach of Saudi Arabia relativized the defeat of the Argentine team in the Qatar 2022 World Cup: “She can be world champion”

Hervé Renard highlighted the work of his coaches in the surprise 2-1 victory against Albiceleste, which was committed to the matches against Mexico and Poland

The problem with this decision was that wrong player. The account of Twitter @ArchivoVAR He uploaded an image with the controversial move and pointed out that the drawing of lines was done wrong because the last Saudi man on that defensive line was yasir al-shahrani. The left back would enable the Argentine by millimeters, but technology deprived the Argentine team of the second goal.

The image that @ArchivoVAR uploaded that would show Lautaro Martínez enabled

At 33, the light blue and white scored another goal under the striker’s responsibility, but it was canceled again due to another offside, one of the seven that the team registered during that first half. The final whistle of Vincic ended the early stage with a stark result that took its toll on the plugin.

Three minutes into the second half, Saleh Al Shehri he beat out speed Christian Romero and defined crossover to the farthest suit of Emiliano Martinez. Five later, the comeback was completed with the great goal from Salem Al-Dawsari. The leading intervention of VAR had an unavoidable interference in the scoreboard that complicated the aspirations of the Albiceleste.

“We already knew how Arabia played, we were preparing the game during the week and we were aware that the defensive line was ahead, they were millimeters, based on the new technology. They do it and they do it well.” Scaloni declared at a press conference about the offside charges.

In this sense, Lionel Messi joined: “We knew that it was a team that if you let them play, they would play well, that they had good players and that they would advance the line a lot, that’s why we had many goal disallowed situations, perhaps we accelerated a little and we did not find the right moment to avoid falling into the trap because they shoot the line well. But we knew they could do that.”

This adverse result ended a streak of 36 games without defeats on the Argentine national team and forced them to win against Mexico and Polandtheir next two rivals in Group C of the World Cup, to ensure a smooth qualification to the round of 16 of the tournament.

Argentina suffered an unexpected defeat in their debut and was left with no margin of error in the World Cup
26 long faces and a message behind the scenes: behind the scenes of the Argentine locker room after the painful defeat against Saudi Arabia
The future of the Argentine team in the Qatar 2022 World Cup after the tie between Mexico and Poland: what it needs to qualify for the round of 16

“Grey” import of grain from the Russian Federation