Cartoon about a teenager Jack Kagan, the hero of the resistance Holocaust- such a project this year was taken up by an international creative laboratory, which is organized by the German non-profit organization KuBiPro eV. The animated film should be the result of the joint work of schoolchildren and students from Germany, Belarus and Russia.

The idea of ​​the cartoon was proposed by partners from Belarus

The script is based on a story about a prisoner of the Novogrudok ghetto that existed on the territory of Belarus, and a participant in the Belsk partisan camp, Jack Kagan. Together with other labor camp inmates, he managed to escape through the tunnel. Jack joined the partisan group of the Bielski brothers, who led the resistance against the Nazis and saved the lives of a huge number of Jews. This is a unique episode in the history of European Jewish resistance during World War II, organizers of the laboratory say.

“This project was proposed to us by our partners from Belarus. There is a Holocaust memorial museum in Novogrudok. Jack Kagan, one of those who came to the museum, often spoke there, and until recently they had a fairly close relationship with him. Unfortunately, he died a few years ago,” says Anna Leonenko, head of the project for studying European history and involving young people in the creative process “Jewish Resistance in World War II,” in an interview with DW. 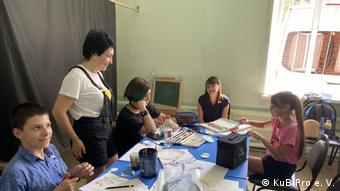 The work involves teenagers who already have experience in creating cartoons and other art projects. The purpose of the creative lab is to contribute to the cooperation of civil society, the project leader explains: “The creative lab creates amateur products, but sometimes they turn out to be super professional. It depends on what kind of people are involved in the project. which will then take prizes at festivals. Of course, we do not exclude this, but our main goal is to bring people from different countries together to work on one project.”

“Participants have a common vision of the Holocaust”

The participants were assigned to different workshops, there are three of them in total within the laboratory: screenwriting, design and post-production workshop. The program also includes a webinar series that dives deep into the Holocaust, which is perceived differently in each of the three countries. If the focus of the history course in German schools is the crimes of the Nazis, then the topic of the Holocaust is practically absent in Russian textbooks. In Belarus, the central place is occupied by the Minsk ghetto, through which about 100 thousand people passed.

However, the participants of the creative laboratory have a common vision of the Holocaust, the organizers say. This, according to them, is evidenced by the experience of the project that KuBiPro conducted two years ago. Then teenagers from five countries took part in it. 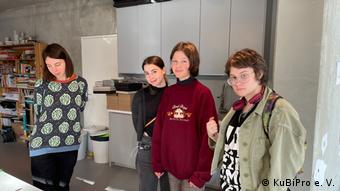 “At first, we also thought that the situation was perceived differently. Belarus and Ukraine suffered greatly from the Holocaust, as did Poland, because the territories were occupied. In Russia, there were fewer occupied territories, and, in principle, historically it happened that “The Jewish population lived in the Pale of Settlement. Nevertheless, this topic is also important for them. Germany – it is clear that there is a completely different story,” says Anna Leonenko. To participate in the project, they are looking for schoolchildren and students who are really interested in the topic of the Holocaust, she explains.

“We didn’t have, for example, participants who didn’t themselves come from Jewish families, whose grandfather, for example, fought on the side of the Nazis. There were simply no such people. Of course, their vision of this situation would probably also be interesting laboratory, and maybe some discussions would have arisen,” says the project leader. The topic of joint work, according to her, was discussed as part of the script workshop, as the participants developed the script, and after that “concentrated more on production, that is, the focus of interaction is no longer on the topic, but on the form.”

The premiere will take place on December 8

The laboratory will work until the end of September. The partners of KuBiPro are NPO “Dialog” and the animation film studio “Enfis” from Minsk, as well as the autonomous non-profit organization “Resource Center for Social Initiatives” from Moscow. The project was organized with the support of the German Ministry of Foreign Affairs within the framework of the Eastern Partnership and Russia program.

The premiere of the cartoon about the feat of Jack Kagan is scheduled for December 8, 2022 – on the Day of Remembrance of the first mass execution of Jews in Novogrudok. Subsequently, it will be offered to museums and other organizations that preserve the memory of the Holocaust and World War II.