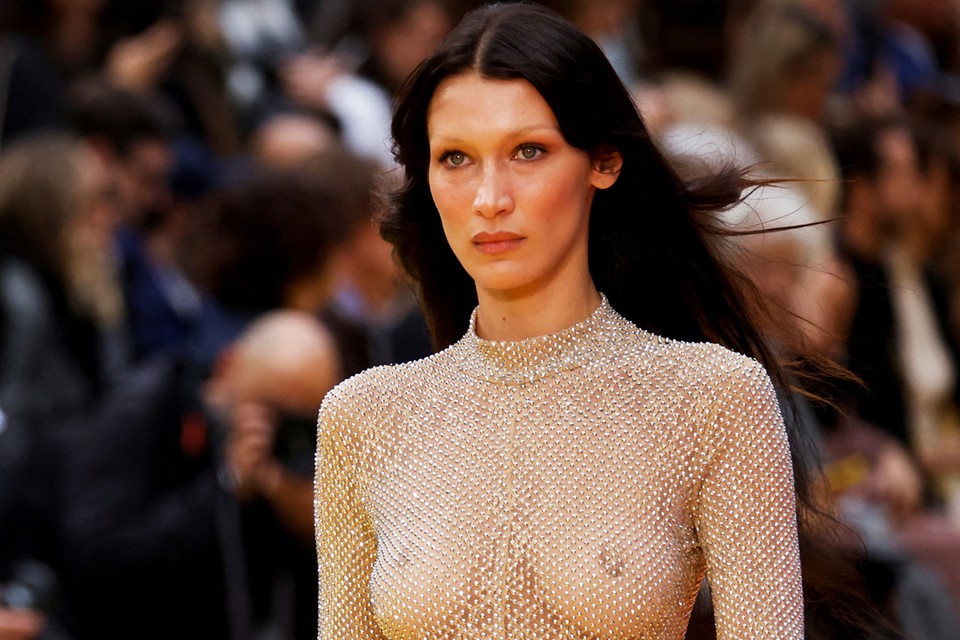 Bella Hadid is back as a Paris Fashion Week sensation. The supermodel took part in the show of the new collection of designer Stella McCartney. One of the most popular fashion models on the planet walked the catwalk in a golden transparent jumpsuit, under which there was no underwear.

The extravagant outfit allowed Bella to boast not only an amazingly slender figure, but also beautiful breasts without a bra. The charms of 25-year-old Hadid were perfectly visible under the transparent fabric. Of the underwear on the beauty were only thong panties.

At the current Fashion Week, Bella is literally like hot cakes. It is her that designers trust to show the most spectacular things from their new collections. A couple of days ago, Hadid caught everyone’s attention by showing off a dress made of liquid cotton at the Coperni spring-summer show. Then Bella already went to the podium half-naked. A special spray was sprayed on her body, which turned into a dress right in front of the public. The founders of the French brand, Sebastien Meyer and Arnaud Vaillant, put on a real show for the audience. A special technology was invented by Fabrican. A liquid of cotton and synthetic fibers diluted in a polymer solution transforms into a wearable material upon contact with the body. According to the creators of the miracle outfit, the dress can be dissolved again and then sprayed again, creating a new outfit with a completely different design.

Bella has a sister, Gigi, who is also a popular model. Gigi, along with Bella, participated in the Stella McCartney show, however, they chose more closed outfits for her. Recently, the name Gigi has been on the tabloid pages. They say the blonde beauty has become the new girlfriend of Leonardo DiCaprio. The 47-year-old Hollywood lover recently broke up with his girlfriend Camila Morrone. And now he has his eye on one of Hadid’s sisters.

Bella’s personal life is also great. The model meets with art director Mark Kalman. The couple stopped hiding the romance this spring. The lovers admitted that they started dating in the summer of 2021.

Gigi and Bella Hadid are among the top highest paid models in the world. They grew up in Los Angeles to millionaire construction company owner Mohamed Hadid and Dutch model Yolanda Hadid.

Austria reiterates that it will not give lethal weapons to Ukraine