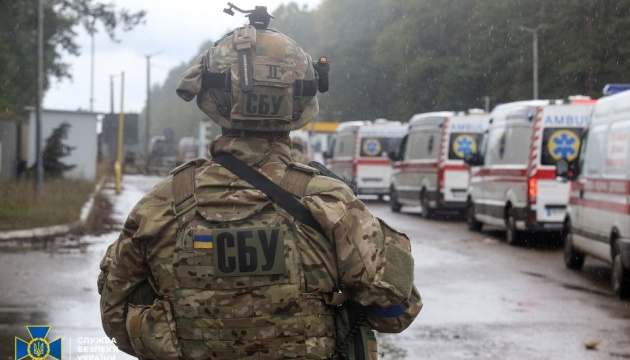 The Security Service of Ukraine has documented the illegal activities of three more heads of “district prosecutor’s offices” created by the Russian invaders.

“With the active support of the residents of the Luhansk region, the SBU continues to identify and document the activities of traitors, collaborators and enemy proteges in the temporarily occupied territories of the region. All three “high-ranking officials” arrived in the “new” occupied territories from ORLO, where they had already curry favor with the occupiers,” the report says.

It is noted that the “Popasnyansky District Prosecutor’s Office of the LPR”, illegally created by the occupiers, was headed by a resident of the Donetsk region. Previously, in the “LPR” group, he served as “deputy prosecutor” of Alchevsk. A 37-year-old resident of Luhansk, who managed to work as a “department head” in the so-called. “Prosecutor General” of the “LPR” group. A 30-year-old Lugansk resident, a former “investigator” of the “Prosecutor General of the LPR”, came to lead the “Prosecutor’s Office of the Novopskovskiy District”, organized by the occupiers.

These persons, under martial law, voluntarily took positions in illegal law enforcement agencies of the occupation administration of the Russian Federation.

The offenders were informed of suspicion of collaborative activities under Part 7 of Art. 111-1 of the Criminal Code of Ukraine. They are wanted.

The pre-trial investigation of the cases is carried out by the investigative unit of the Main Directorate of the SBU in Donetsk and Luhansk regions under the procedural leadership of the Luhansk regional prosecutor’s office.

For voluntarily holding positions in illegal law enforcement agencies established in the temporarily occupied territory, these persons face up to 15 years in prison and confiscation of property.

As reported, the invaders in the Luhansk region entrust the most dirty work to collaborators from among the local population. Law enforcement agencies of the Lugansk region are constantly working to identify such persons and bring them to criminal responsibility. In particular, the 3rd Directorate of the Main Directorate of the SBU in Donetsk and Luhansk regions has already exposed about 130 traitors.

“Nord Stream” could be damaged by attackers

After the resignation of CFK, the governors and the CGT set up a political table to reorganize Peronism