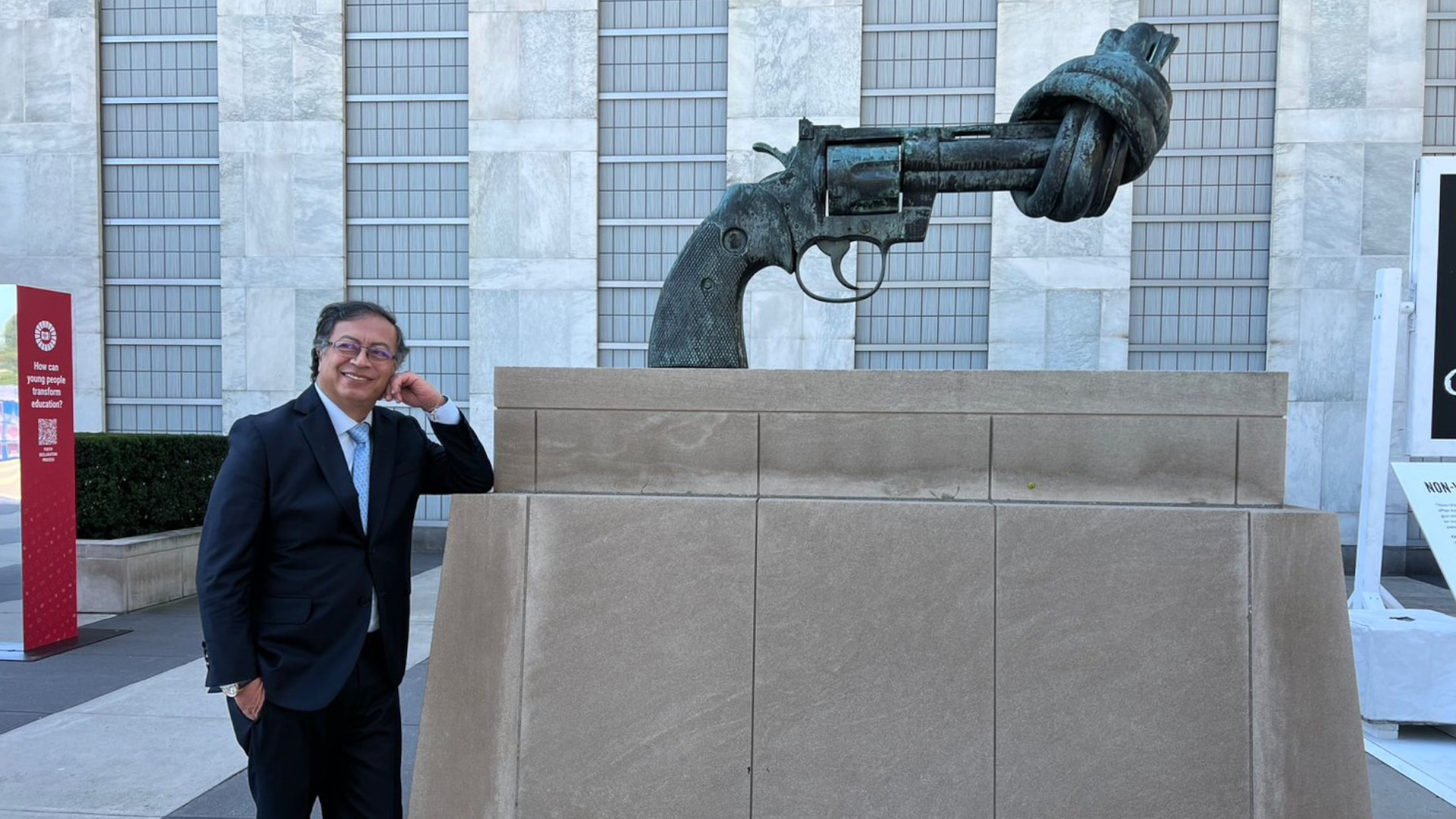 The president of Colombia, Gustavo Francisco Petro, poses next to the sculpture “No violence” or “The knotted weapon” by the Swedish artist Karl Fredrik Reutersward and which is located at the entrance of the UN headquarters in New York (USA .). Photo: @petrogustavo

On Sunday, October 2, the International Day of Non-Violence was commemorated in the world, birth date Mahatma Gandhi who led India’s independence from the British Empire through inspiring peaceful methods, Therefore, the United Nations Organization (UN) established this day to: “Ensure a culture of peace, tolerance, understanding and non-violence”.

Thus Colombia joined the activities that were carried out at a planetary level to solemnize this day and among the traditional organizations and institutions of the country that participated in the day was the Catholic Church, which implemented its campaign “You will not kill, you will not disappear” within the activities, that the President of the Republic, Gustavo Francisco Petro, highlighted through his official Twitter account.

“The conference called by the Catholic Church: “You will not kill, you will not disappear” is an enormous contribution to the Peace of Colombia. THANK YOU. (sic)”, The president published, along with a link to an opinion article written by Father Rafael Castillo Torres, Director of the National Secretariat of Social Pastoral of the Episcopal Conference of Colombia.

In said article, the religious supports the Total Peace proposal that the President of the Republic seeks to implement, but that transcends other sectors of society, like that of those who protest violently in the streets.

“It will be a day that will contribute to three very specific things: de-escalate the armed conflict with all the actors so that shooting does not continue and those who have “stones in their hands, drop them”; relax our relations to promote social dialogue from the culture of encounter and protect and preserve the lives of allespecially of the victims and the most vulnerable (sic)”, the priest expressed in his letter.

Also criticized those who try to dismiss crimes that have been committed in the country, in which in some cases the authorities themselves have been involved.

“We are making progress in this campaign. confirming the efforts of some to hide the indignation felt by the Nation in the face of extrajudicial executions, the disappearance of victims, the elimination of evidence, the intervention of dark forces that they are true death squads, as well as the “prohibition” of truly impartial investigations,” he questioned.

Also, criticized those who want to attract attention with vandalism in the demonstrations that take place in the country and that on occasions have affected sacred places for that congregation, as happened recently in the protest in favor of the decriminalization of abortion where they tried to set fire to the door of the Primate Cathedral.

“There is no lack of those since the conquest of a misnamed “freedom of expression”, they express themselves irreverently in the face of the sacred, profaning places, violating rights and using rude and indecent terminology. It seems that kind language or polite words have become obsolete and to this is added, in the “epilepsy of social networks”, bad taste and transgression, “he added.

Finally, the religious made a call for In all areas of life, non-violence is encouraged, a culture that he proposed should be inculcated from the homes themselves.

“It is urgent to open paths of reconciliation. The moral health of the nation demands it. Reconciliation cannot be too big for us. The stable and lasting peace that we seek must be an operating and guiding reality. We have to produce it from local processes; create it from the house, the parish and the street, without being naive but ingenious”, Father Castillo urged.

The extermination continues: they assassinated a social leader of the Historical Pact in Antioquia and another of the ADA in Bolívar
October 29, date chosen for a new march against the reforms of the Government of Gustavo Petro
Ministry of Transport and Government of San Andrés reached an agreement for the expansion of the airport

Trump decided to mediate between Russia and Ukraine