After today explosion on the Crimean bridge, the Russians remembered the summer formidable statement of the ex-president of the country Dmitry Medvedev. The one in which he threatened “Doomsday” to those who “risk” attacking the crossing.

“Individual exalted bloody clowns who pop up from time to time with some statements, try to threaten us – I mean the attack on the Crimea <…> I want to say in this regard that <…> the consequences are obvious, if something like this If it happens, Judgment Day will come for them all there at once. Very fast and hard,” the deputy chairman of the Russian Security Council promised on July 18.

Kremlin pool journalist Dmitry Smirnov recalled that there was another no less loud “promise” of Medvedev:

“One of the stubborn Ukrainian bosses said about the need to strike at the Crimean bridge. I hope he understands that he will be a reciprocal target,” the politician wrote on April 21 in his social networks.

Now the journalist asked Dmitry Medvedev a question, the answer to which the Russians have been waiting since this morning:

“150 million people really want to know if the time has come for the stubborn Ukrainian boss to understand what will be the reciprocal goal,” Smirnov wrote in his Telegram.

By the way, he is not the only one asking the ex-president about this: 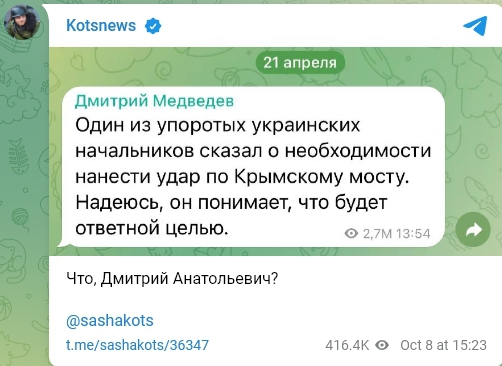 In the Kherson region, the Russians shot down a minibus with civilians, two dead