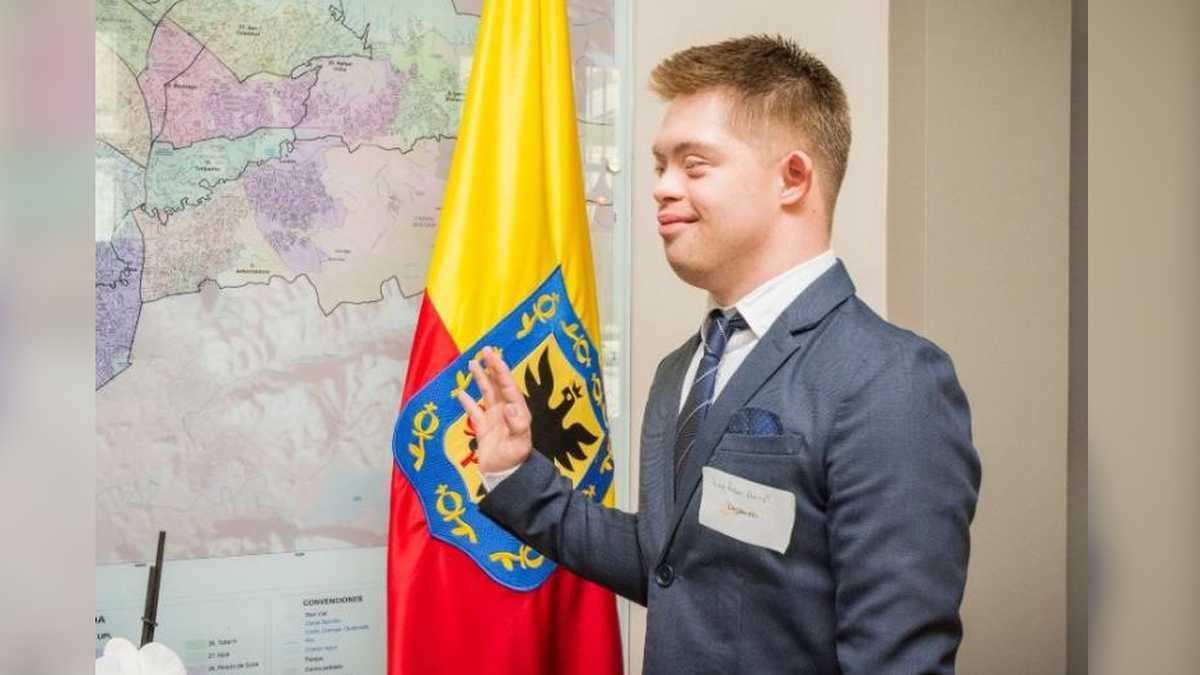 Image provided by Secretary of Government

Last week a historic event occurred in Bogotá, it is the entry of Juan Pablo Dimitri to the District Secretary of Government, the 24-year-old was inaugurated as the first official with Down syndrome and assumed his position in the area of ​​attention to the citizen.

The young official indicated during his possession in a cheerful way: “I always dreamed of this moment, with this moment, when I would work in the Mayor’s Office and could help many citizens with disabilities”.

For his part, District Government Secretary Felipe Jiménez highlighted the skills and abilities of Juan Pablo and the role he will play within a mayor’s office that wants to accommodate inclusion: “From now on we can count on Dimitri Vergara Cifuentes as a public official in Bogotá. His life story means struggle and bravery. And his family is undoubtedly the reflection of love and perseverance”.

But Juan Pablo is not only a young man with a vocation for service, in the 2019 was part of the Colombian delegation in the S World Summer GamesSpecial Olympics in Abu Dhabi, there Dimitri represented the country in the equestrian discipline, where won two silver medals and a fifth place.

Although it is not just sports, the talented Bogota official also has a passion for dance, it is for this reason that as a member of the Fundación Cultural de Ballet Tierra Colombiana, he will go to the city of Ibagué this October to represent the capital. at the International Festival ‘Dancing Without Barriers‘.

Juan Pablo Dimitri is currently completing a diploma in leadership and service, a fact that demonstrates the constant growth that the young public official is looking for, in this regard, his mother Jazmín Cifuentes has highlighted. “made the program grow into adulthood where they prepare him for working life, it is like his university career and thus he was able to do internships at the Universidad del Bosque and the Colombian School of Engineering”.

“People with Down syndrome can do what they plan to do. What really need is to have open and inclusive doors that allow them to access these opportunities”, indicated Juan Pablo Dimitri with his characteristic smile.

The young official is part of the “Government Without Limits” strategy, where it is planned to provide a true inclusion in the District mayor’s office, for his part from the Government Secretariat they indicated: “It is as well as from his position will be there to guide, assist and raise awareness all procedures in the service area for citizens with a differential and inclusive approach”.

Similarly, District Government Secretary Felipe Jiménez extended the invitation to all public and private entities to provide opportunities to people with different abilities. The district official highlighted the virtues that these people who have been disciplined and constant in their training processes can contribute.

“We invite not only the other municipalities but all private companies to give people with disabilities an opportunity, people who struggle with their families, who are an example of courage every day”.

“People who earn more should pay more”: the second richest man in Colombia gave his opinion on Petro’s tax reform
Independiente del Valle does not exist the phrase of the Win Sports journalist who remembers now that the Ecuadorians won the South American Cup
The Democratic Center and the opposition organized the second ‘Summit of Patriots’ in the Red Room of the Hotel Tequendama
Two dead and 19 injured left an accident on the Pan-American highway in the sector between Popayán and Timbío (Cauca)

Alexander Prokhanov: There was everything at the Valdai Forum, except black bread and onions, which could have been crunchy…