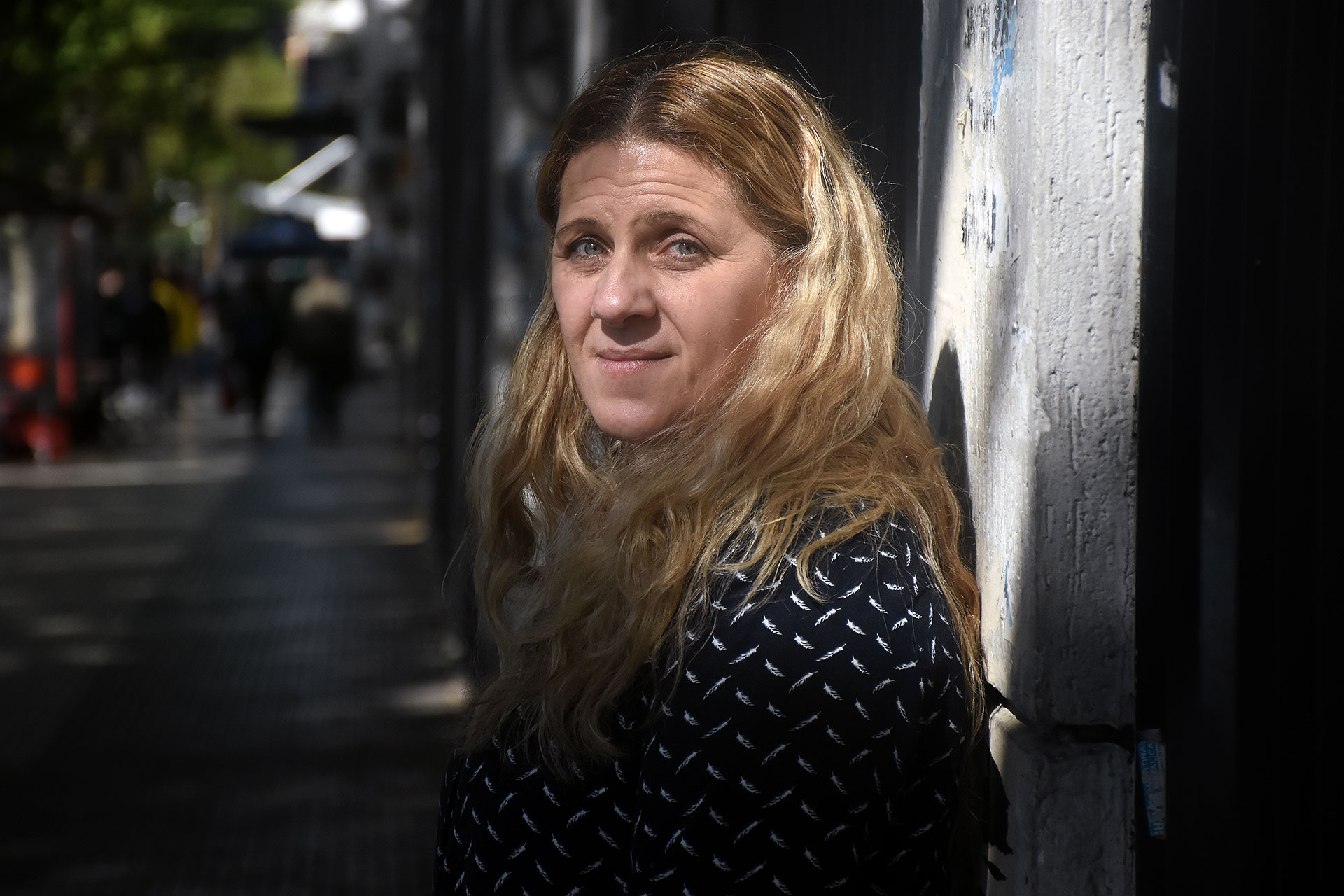 Paula Rodríguez Puglia grew up in a family built on a secret (Photo: Nicolás Stulberg)

It happened one day in the year 2000 and for the three children it was a surprise. Not that her parents were going to separate – they were already grown up and could understand it – but that it was her breast who was going to leave home. A surprise, moreover, with several chapters because before closing the last bag the woman took out four cards that he had written in his own handwriting, one for each of them.

“Four? why four, yeah we are three?”, thought Paula, the oldest, still with the sealed envelope in her hand. The letter, written on an agenda sheet, was addressed to “NN Rodriguez” and Paula paid more attention to that text than the one her mom had left for her.

The letter had a particularity: he told a story and he told it speaking directly to someone whom Paula did not know. 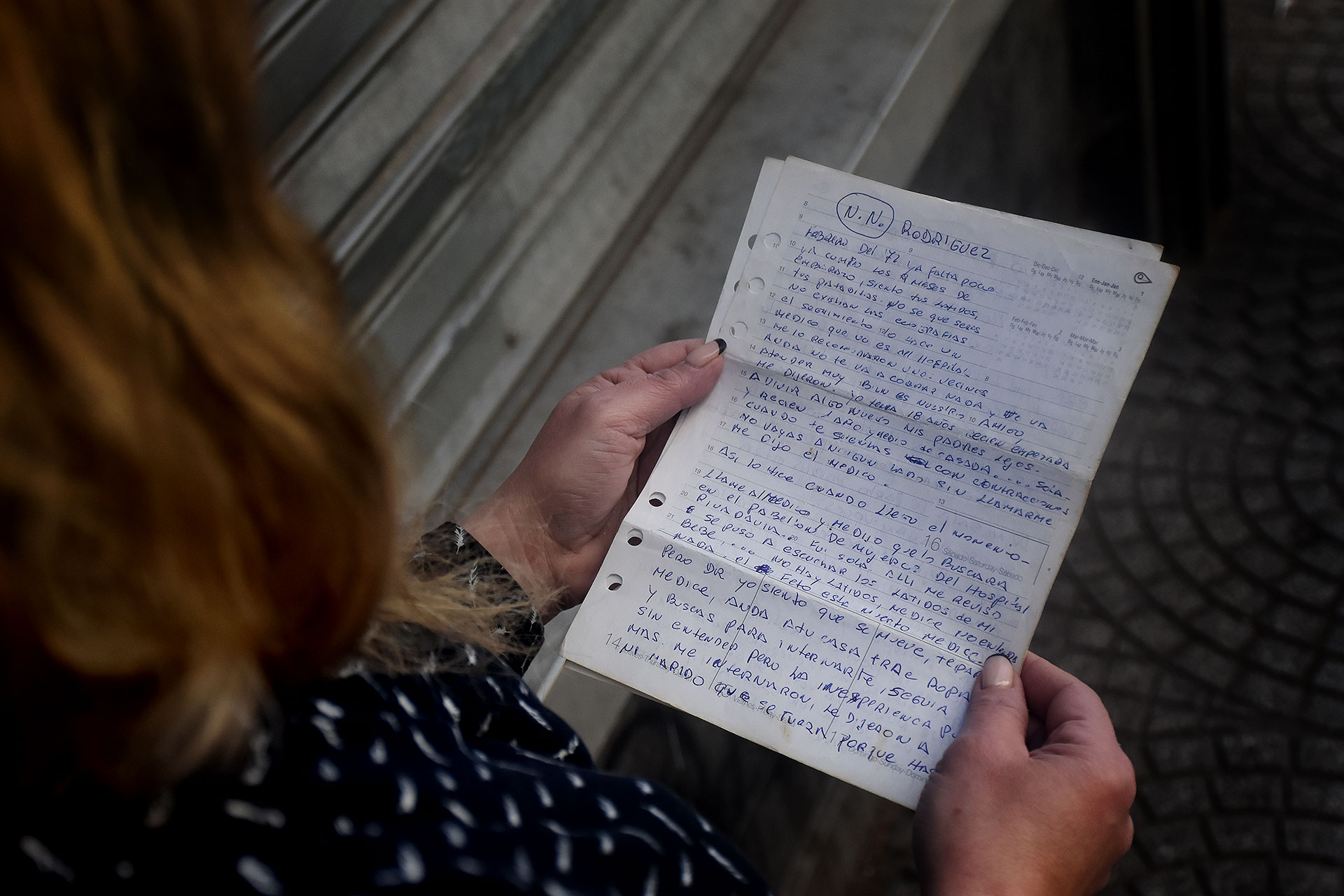 With the letter written in 2000 (Photo: Nicolás Stulberg)

Paula Rodríguez Puglia is 49 years old and works as a receptionist in an accounting firm. She was 27 when her parents separated-she was her oldest, or so she was supposed-, and it was only in that family break that she began to look at a usual scene with different eyes.

“They fought a lot. I remember that just at that time there was the television program ‘People looking for people’”, he tells Infobae. The program, hosted by Franco Bagnato, had started three years earlier, in 1997, and was all the rage among those who had always wanted find someone but they didn’t know how.

“They fought because my mom wanted to go but my dad wouldn’t let her, he told her that almost 30 years had passed, that if he found her he would change his life“, remember. “She did not doubt that she was alive, but she told him that maybe that girl didn’t know anything about his real story.” 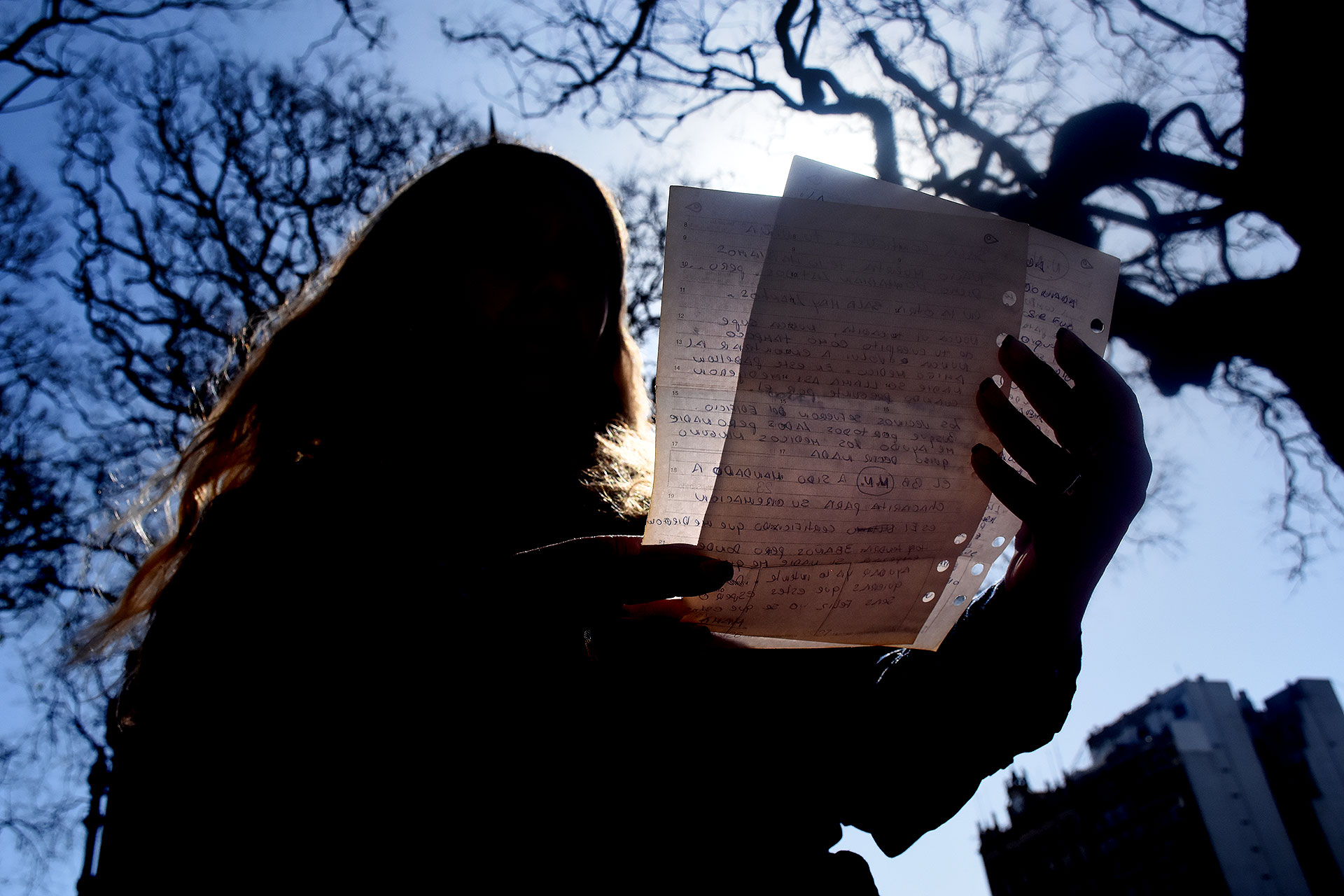 “The voices felt far away, I feel that you are being born,” says the text (Photo: Nicolás Stulberg)

Paula had never fully understood who they were talking about and it was only then that she began to connect the dots.

“Besides, I had always felt that I was missing something, like a part of me”, he says later, and rests a hand on the center of his chest. What she had always lacked was a older sister, a baby born in 1972 at the Rivadavia Hospital and that she was going to be called Paula, the name that was later given to her.

The history behind the history

“February 1972, it’s not long now, I’m 9 months pregnant, I feel your heartbeat, your little kicks, I don’t know what you’ll be, there are no ultrasounds”. Thus begins the letter addressed to NN Rodríguez.

The context Paula weaves it together: “My mom and dad were very young, they were newlyweds and had come to Argentina from Uruguay. They lived in a hotel in the area of ​​Congress”. 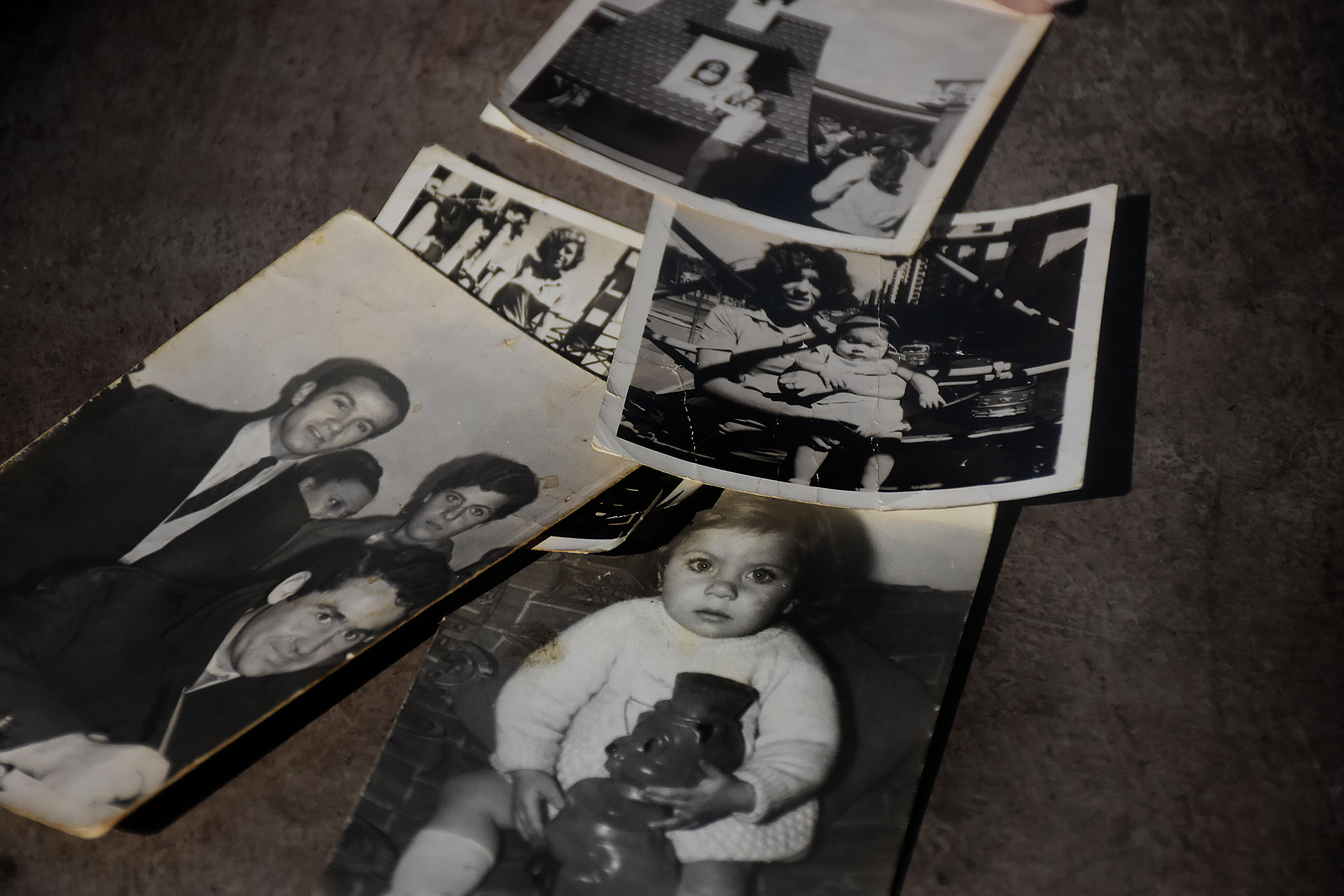 Maria Puglia was little more than a teenager, she was pregnant, sewn by a web of fears but happy. Alberto Rodríguez, her young husband, navigated that same ambivalence.

It was in that hotel on the street Parana that María and Alberto met a couple who were also very young. “Sometimes he crossed to play pool with the boy from the other marriage, with the surname Calderón,” adds Paula. They were the ones who recommended that she continue the pregnancy with “a doctor friend.

The woman details it in the letter she left before leaving: “’Come on, he’s not going to charge you anything and he’s going to treat you very well, he’s our friend,’ they told me. I was 19 years old, I had just started to experience something new, my parents were far away and I had only been married for a year, alone. ‘When you sit down with contractions, don’t go anywhere without calling me,’ the doctor told me. 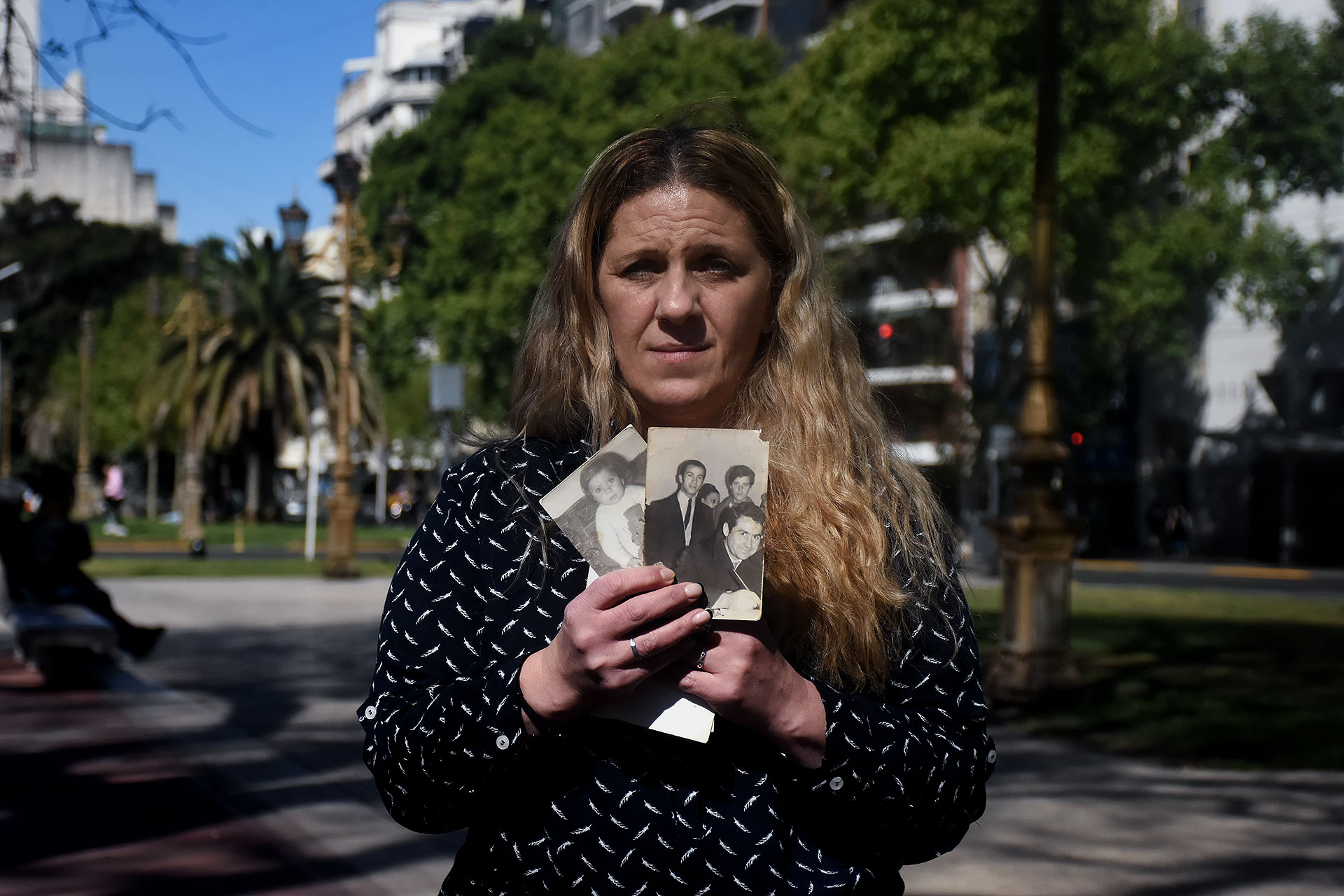 His own mother told him the story of the “friend doctor” (Photo: Nicolás Stulberg)

The February 22, 1972Maria, already having contractions, called him.

“He told me to look for him at the Rivadavia Hospital, in the women’s ward. I went alone, she checked on me, she listened to the heartbeat ”, follow the letter. “No heartbeat”, the doctor told him afterwards. And he added, in case he hadn’t understood: “The fetus is dead.”

Mary knows despaired and he said: “But I feel that does it move”. The doctor, she tells that baby herself in the letter, asked her to go back to her house and look for clothes to go to hospital.

“I still didn’t understand, but the inexperience could more They hospitalized me, they told my husband to leave because nothing would happen until tonight. I felt alone, abandoned, without anyone, I cried.

In the lines that follow comes that of “I feel that you are being born”the feeling of “warm foot” coming out of her body: a physical and emotional sensation, she tells him in blue ink, “That I will never stop feeling”. 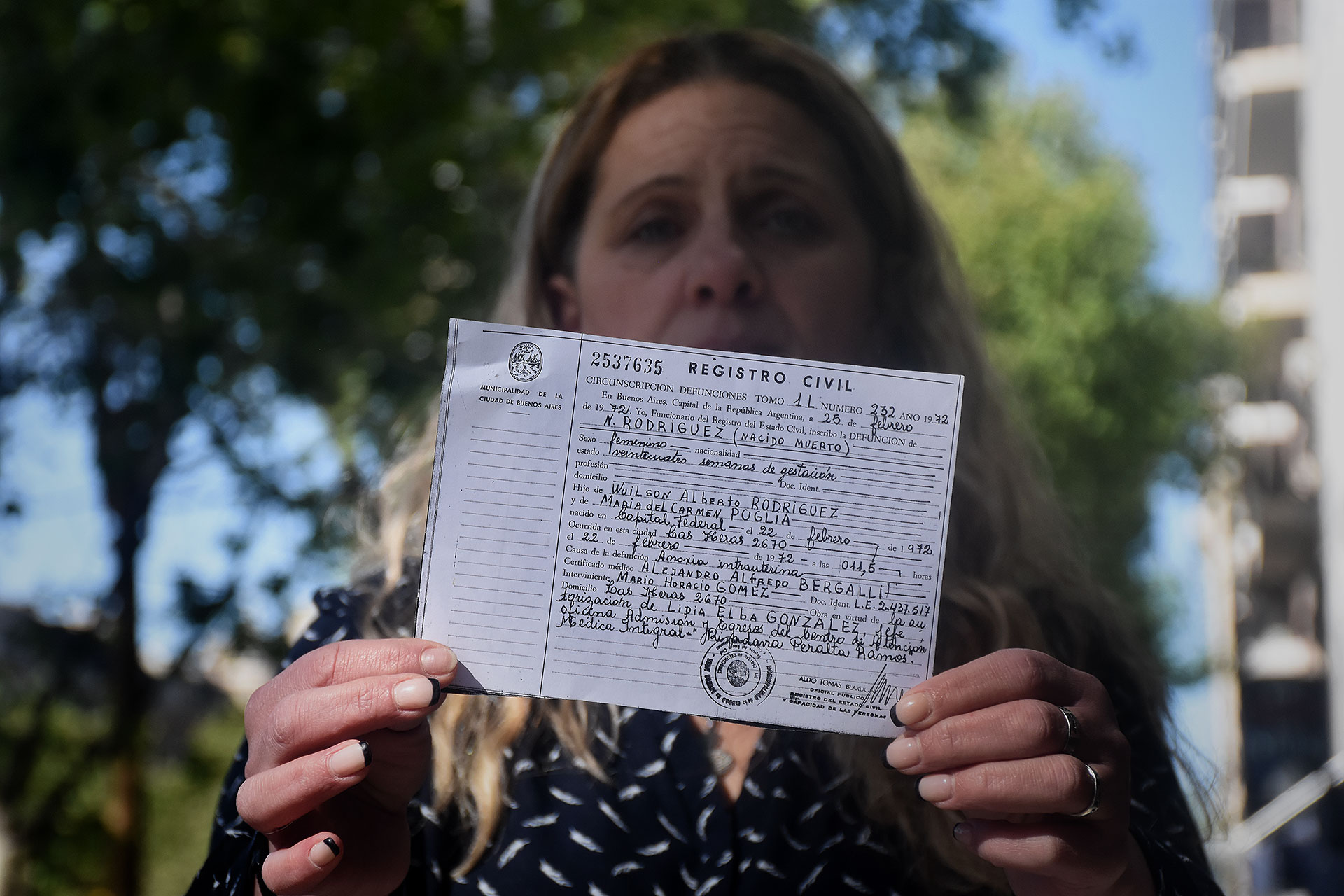 The death certificate that you already know is apocryphal (Photo: Nicolás Stulberg)

“They wrapped you in a sheet very quickly and took you to the next room. ‘Your girl was born dead, we told you, there was no heartbeat’. But in the other room there cries. I never saw your little face, I never knew about your little body, I never found the doctor friend again.

In the distance, Paula returns to focus on the context. She was 1972 and, in addition to being a teenager, her mother was foreigna first-timer and didn’t know anyone in Argentina to ask for help.

“And in his ignorance believe them, they are doctors, but at the same time suspicion. She says that later they gave her a death certificate and told her ‘stay calm, we’ll take care of it’. That is why she did not see the body, there was no wake, no burial, no farewell”. 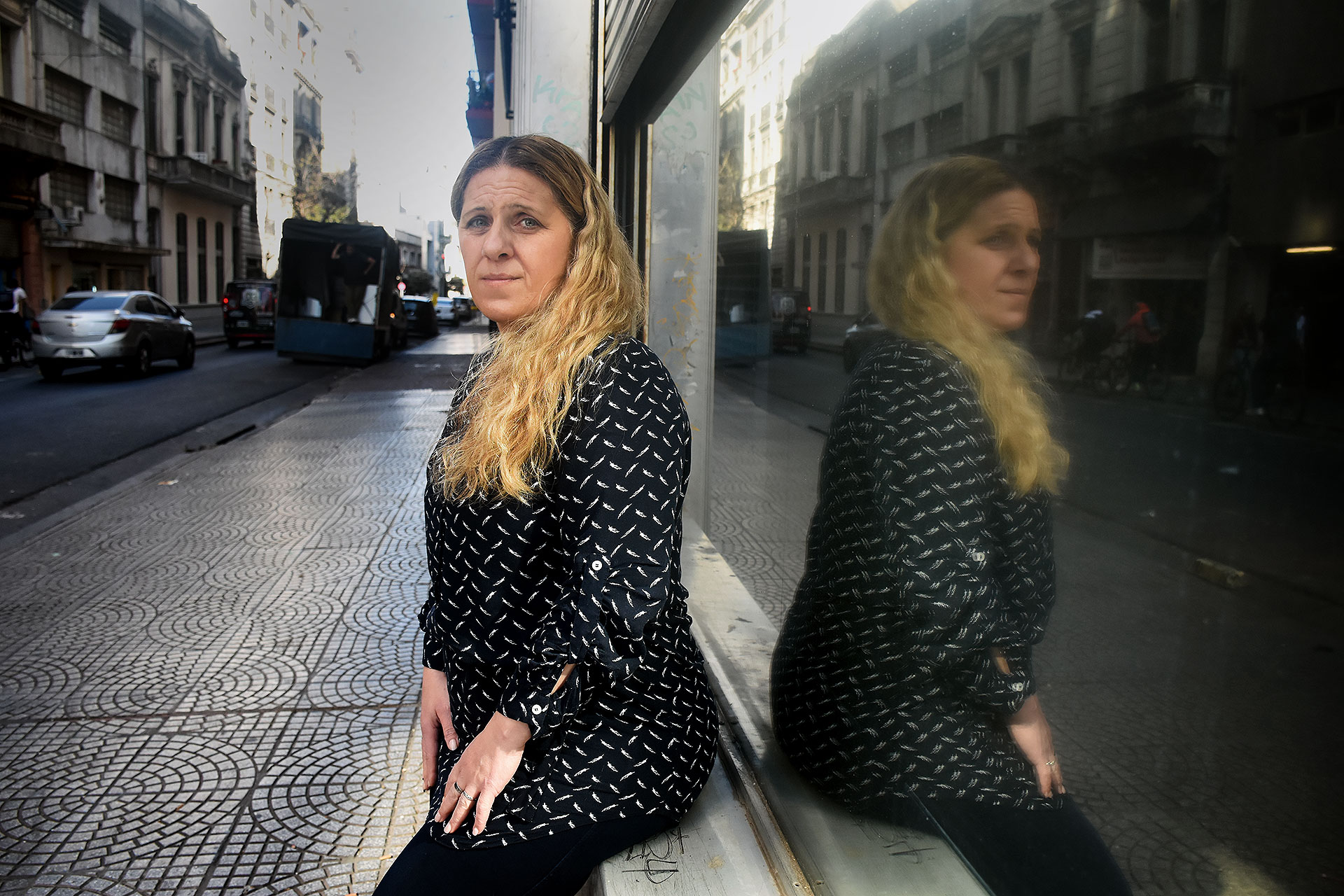 There was no wake, burial, nor did they see the body (Photo: Nicolás Stulberg)

The couple tried to move on, although always with the doubt of tenant. A year later, still with her arms and the empty cradle, the woman became pregnant again. In 1974 she was born Paula, the daughter she was going to be in charge of delving into the past.

in the name of the sister

On that day in the year 2000 when Maria left the four letters and left, the groundwater -her waters- had begun to overflow.

“It turns out that in the 70s, while trying to bury All this, my mother had met another man, a Chilean man, with whom she had fallen in love. The man was married and so was she, so each one continued with their official lives”, says Paula.

“But 30 years later, when we were grown up, she found out that the man had separated, so she made the decision to end her marriage to go to Chile to live that love story”.

A swerve like this was not -nor is it- something usual in women-mothers, who usually leave their lives aside on behalf of their children. So Paula didn’t get mad, she didn’t judged: What he was seeing was a woman teaching him to take risks for what he felt.

And it is in the name of that mother, who will soon fulfill 70 years, who took charge of the search for his sister. They did not stop seeing her: they see each other every time the woman comes to visit them in Argentina or one of her children travels to see her.

“I was finding more people who said that the same thing had happened to them in the same hospital, sometimes even with the same midwife and the same doctor,” he says.

It was thus that in 2019 Paula formed a group of searcher mothers, fathers and brothers that she called Born and stolen from Rivadavia Hospital and hospitals in CABA, which already has almost 300 members. 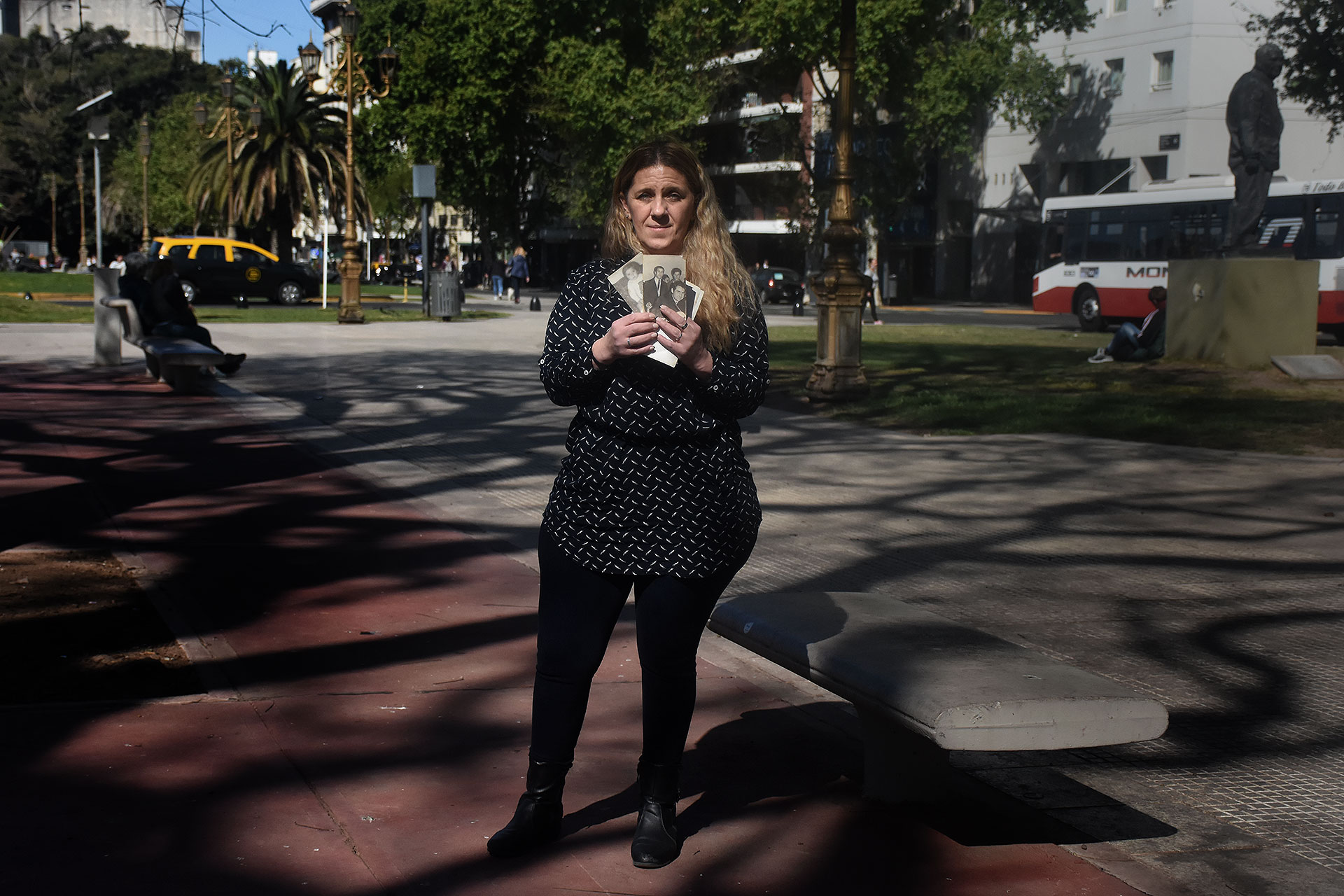 “More cases of mothers to whom They said their children had been born dead. Also of children who appear to have been born in that hospital and are looking for their biological origins.”

And he continues: “It is very hard to get data: Hospitals deny us records. They say ‘they burned’, ‘they stole them’ or they just deny it. Many mothers continue to believe that their son has died and others, like mine, search because they know that they are they stole”.

Trying to put the pieces together, Paula went to the Civil registration looking for that sister’s death certificate. “Several times they told me that she did not exist until one day she appeared. The first thing I saw is that the certificate is apocryphal, because it has false data. She says that my mom went to give birth when she was six months gestation, but my parents maintain that I was already nine, it was a full-term pregnancy.” 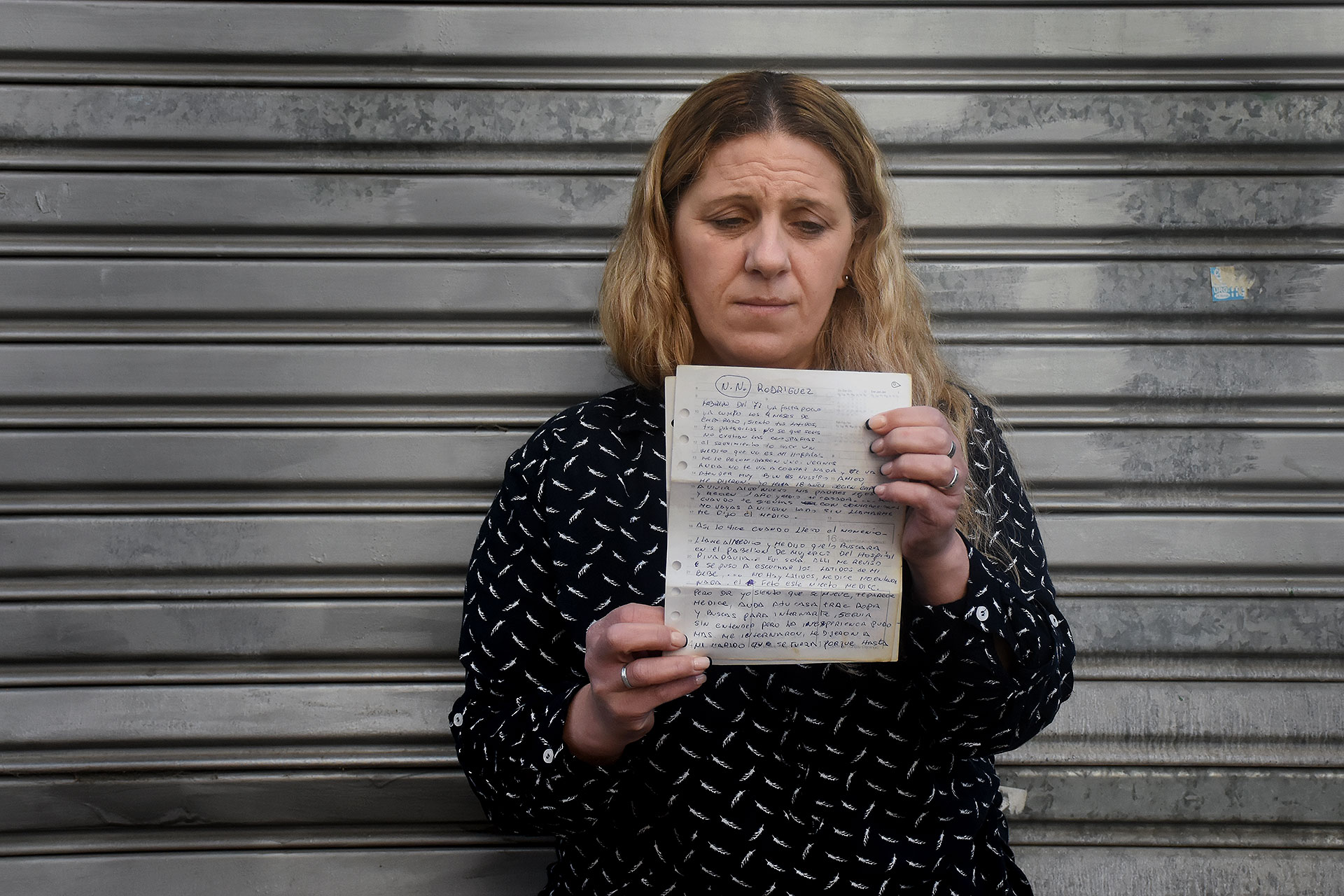 She keeps the letter to give it to that NN daughter if she ever finds it (Photo: Nicolás Stulberg)

Then he went to the Chacarita cemetery, where it was established that the small coffin entered six days after the birth.

“We don’t know if there was a body, or if it was hers. They buried her but they passed 50 years, it is no longer”, he says goodbye. After that, nothing. She doesn’t have any more information, just the certainty in the letter that her mother left for that NN daughter and that Paula keeps.

“Wherever you are, I hope you are happy”ends. “I know you’re alive.”

A mysterious woman stalked him since he was a child: 40 years later, he found out what he wanted
They spent 68 years apart and met after a note from Infobae: “Daughter, they stole you from my hands”
A night of forbidden sex and 40 years of pain: “It’s hard to believe that your mother can do something like that to you”

Explosion and fire in the Bryansk region: probably the shelling of the Armed Forces of Ukraine

A 5.5 magnitude earthquake strikes southeast of Fiji in the South Pacific