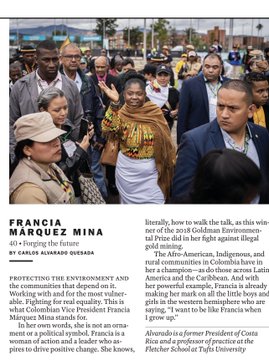 In Colombia she is criticized, abroad she is considered one of the most influential people: Francia Márquez

Woman, black, leader of social bases, France Marquez It has marked a milestone in the history of Colombian politics. Marginalized Colombia from the periphery and the one that fights for its natural resources and in defense of the territory, is represented in Francia Márquez, a woman who, for the first time, comes to power with her votes and without the pressure of a machinery .

Let us remember that Francia Márquez was nominated in 2018 the Goldman Environmental Prize For his job against illegal gold mining, and was the winner of this, so Time magazine considered it worthy of being recognized in its annual list. This is due to the fact that in 2009 her community resisted the possible dispossession of her territory, in which she would initiate the mining exploration of AngloGold Ashanti.

The current vice president of Colombia was born on December 1, 1981 in the municipality of Suárez, Cauca. “I’m a woman Afro-descendant; I grew up on ancestral territory dating back to 1636″, she said as she began her acceptance speech for the 2018 Goldman International Prize for the Environment.

Francia Márquez has been recognized as an activist in her region, especially when her community prevented the sheep riverthe same one that left them gold to collect on its shores, so that its waters would feed the Salvajina reservoir hydroelectric plant, an infrastructure project that feeds on the cauca river and has been the focus of multiple environmental and social crimes, according to reports from several NGO.

“The communities Afro-American, indigenous and rural women from Colombia they have in it a champion, like those of Latin America and the Caribbean”assured the former president of Costa Rica, Carlos Alvarado Quesada, who was commissioned to write the profile of Francia Márquez for Time magazine, adding that the Colombian vice president has already left his mark on the boys and girls of the country and the region, thanks to his work.

In Colombia she has been the target of criticism, even derogatory comments have been directed towards her, the last one that became a media trend, was that of a woman who, in the middle of the march against reforms, made strong statements towards people of African descent, days after The woman was located by the national police after a communication issued by the Prosecutor’s Office and now she must answer to justice.

Returning to the topic of Time magazine, Francia Márquez was chosen among the 100 most influential people in 2022. The American publication highlighted the vice president as a woman who has fought for the protection of the environment and communities that depend on the natural wealth of the country and for the rights of the most vulnerable people in the country. In the article it is described as “a woman of action and leader who aspires to drive positive change”.

Time is a general information magazine that has been published weekly in the United States since 1923. It is one of the most important and influential publications in the world. Its style is similar to Newsweek and US News & World Report. It also has several editions in various parts of the world.

France and Colombia were reviewed in this magazine, no longer with stories of drug trafficking or war, but with a story of a claim with a woman’s face.

Petro Government renounces requesting the extradition of two ELN negotiators who are in Cuba
Hospital yellow alert declared in Barrancabermeja after large-scale explosion in an oil field
Don’t get caught by the traffic jam! These are the road closures for the Bogotá Half Marathon that runs this Sunday

Will wine be allowed to be sold online? This hot topic will be discussed by the participants of the Russian Wine Forum

Russia is marking time because Putin is negotiating