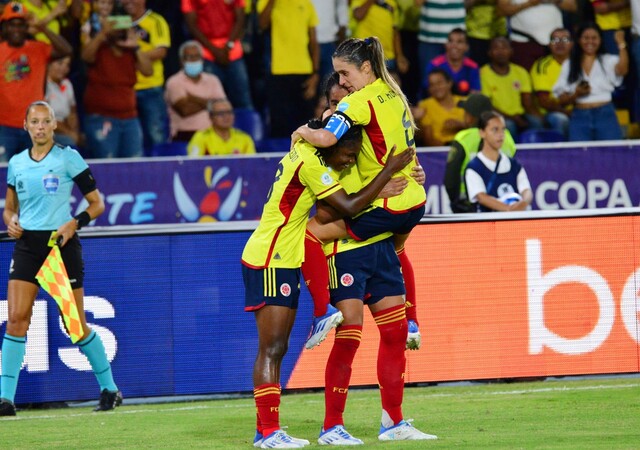 The Colombia selection female once again ratified its great presence in the category at the South American level after defeating Paraguay 1-0, in the first of the two friendly games between these two teams.

The game, which is part of the Colombian women’s preparation for the World Cup in New Zealand and Australia 2023served to give minutes to several players who had not had a chance in the most recent competitions, such as the Copa América held in our country in July.

One of the great absences in the tricolor for this friendly was the scorer Catalina Usmewho could not join this call because she is concentrated with her team, the women’s América de Cali in Ecuador, preparing to play the next Copa Libertadores.

For the same reason, the coach Nelson Abbey he couldn’t count on the right side either Carolina Arias, who is concentrated with Deportivo Cali to compete in the continental club competition. On the other hand, Gabriela Rodriguez Y Linda Caicedo is in India with the Sub 17 National Teampreparing to play the World Cup in the category after the conflict between his soccer Federation and FIFA was resolved.

From the opening whistle it was the ‘coffee growers’ team that began dominating the game. From the hand of leicy santos as the one responsible for generating offensive play, Colombia went over the Paraguayan area. That did not prevent the Guarani from making some incursions into the goal defended by Sandra Sepúlveda, who was safe under the three posts and contributed with her experience to give order to the defensive zone.

The only score of the match came in the 32nd minute of the match, thanks to a genius striker Ivonne Chacon. The recent acquisition of Valencia from Spain and former Millionaires, received a long pass from the Colombian area, eluded her marker and defined with a lob that beat Paraguayan goalkeeper Cristina Recalde. It was a real goal that allowed Colombia to control the timing of the game without major difficulties.

In the complementary stage there were no significant changes in the idea of ​​the game. Colombia continued to attack and Paraguay defended itself, seeking to take advantage of a counterattack situation to generate danger in the goal defended by Sepúlveda.

However, as the minutes passed, the absence of Usme and Caicedo in attack was noted on the Colombian side, resulting in a dominance of possession but lacking in depth. Although that aspect improved with the entry of Mayra Ramírez and Marcela Restrepo, the lack of aim prevented the scoreboard from being more bulky. Thus, despite the fact that Colombia had the best goalscoring actions, the game ended with a narrow victory in favor of the ‘coffee women’.

The next game between these two teams will be on Tuesday the 11th at 7:30 pm, at the Pascual Guerrero stadium.

Miguel Ángel López will represent Colombia in the UCI Gravel World Championship
Behind closed doors and with their own needs, Deportivo Cali and América will face each other in the Valluno classic
Camila Osorio debuts with victory at the San Diego Open

Putin will meet with the heads of the DPR, LPR and liberated regions

In the Kherson region, the Armed Forces of Ukraine used HIMARS with “barbaric cassettes” for the first time