In response to the visit of Speaker of the US House of Representatives Nancy Pelosi to Taiwan China has partially suspended trade with the island. This was reported on Wednesday, August 3, in the Ministry of Commerce of China.

According to him, the export of sand is frozen, the ban came into force immediately. The material is widely used in the production of concrete, in the construction of roads, buildings and infrastructure facilities.

In addition, the General Administration of Customs of the People’s Republic of China has stopped importing citrus fruits, frozen mackerel fillets and chilled sablefish from Taiwan.

How long the restrictions will last is unknown. China is Taiwan’s largest trading partner. 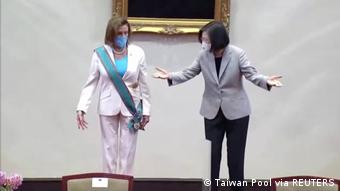 Meanwhile, Nancy Pelosi spoke in the Taiwanese parliament. She thanked the head of the local administration, Tsai Ing-wen, for her leadership and called for increased inter-parliamentary cooperation.

“We give Taiwan credit for being one of the freest societies in the world,” noted Pelosi.

The plane carrying the Speaker of the US House of Representatives landed at Taipei Airport in Taiwan on August 2. The Chinese TV channel CGTN reported that the Chinese fighters at the time of the plane’s approach from Pelosi crossed the Taiwan Strait towards the island.

This is the first visit in 25 years by a speaker of the US House of Representatives. to Taiwan. US Secretary of State – Anthony Blinken pointed out that the Congress is independent from the White House, an equal branch of government, so the decision to travel is “completely up to the speaker.” China summoned US Ambassador to Beijing Nicholas Burns to the Chinese Foreign Ministry in protest.

The final of KVN 2022, who will lead, when will it take place, which teams will perform

Zelensky is shocked that Israel did nothing to help

Bullying in Saco Oliveros live: 12-year-old girl will be operated on shortly and parents ask for a prayer chain