Many jokes, but even more serious experiences of car owners are devoted to the problem of scratches remaining on the surface of the car as a result of minor accidents. It is not surprising that special attention was paid to this issue in the world of modern technologies. 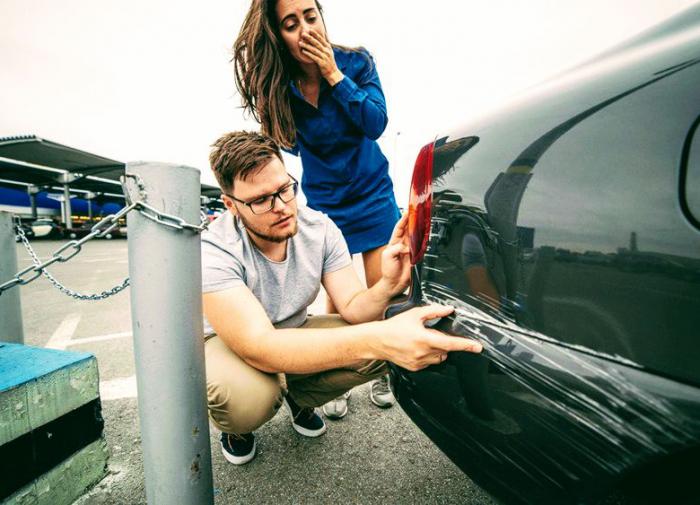 Scratches left on the car as a result of accidents are a real headache for car owners. But it seems that this problem may soon be solved thanks to Korean scientists.

Meet – a protective coating for cars that can “heal” damage in a matter of minutes. All it takes is sunshine and a little patience.

A valuable invention was presented to the world by scientists from the Korean Research Institute of Chemical Technology (South Korea).

How does the new coating work?

The very concept of “self-healing coating” is not new – such substances have been developed in different parts of the world for several years. However, until today, a twofold problem has stood in the way of the creators. If an elastic material with free molecular motion was chosen for the coating, it wore out quickly and became scratched more easily. If the scientists opted for a harder coating, it was less damaged, but if it did get scratches, it recovered worse than an elastic substance.

In pursuit of the ideal, Korean inventors “chased two birds with one stone” – and succeeded quite well in this. Based on a wear-resistant rubber coating, the scientists added an acrylic polyol-based polymer material to it, the chemical bonds of which can break apart and then recombine. Also, the resulting substance was supplemented with a transparent photothermal paint. The result is a transparent coating that, like human skin, can repeatedly “heal” after being damaged. 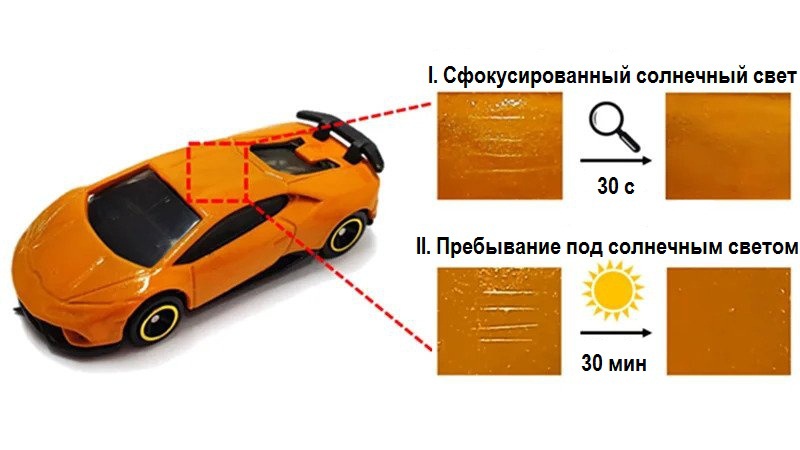 The only thing the poor fellow motorist needs to “heal” the battle wounds of his beloved car is to take the car out into the sunlight. The impact of infrared solar radiation on the coating will start the process of a kind of regeneration in it.

Photothermal paint in the composition of the coating absorbs solar infrared radiation with a length of 1000-1100 nanometers. Light energy is converted into heat energy and the temperature of the protective coating rises.

You should not worry about overheating of the machine: excessive heating can be avoided due to the fact that the infrared radiation of the near range converted into “working” heat is only 10% of midday sunlight. 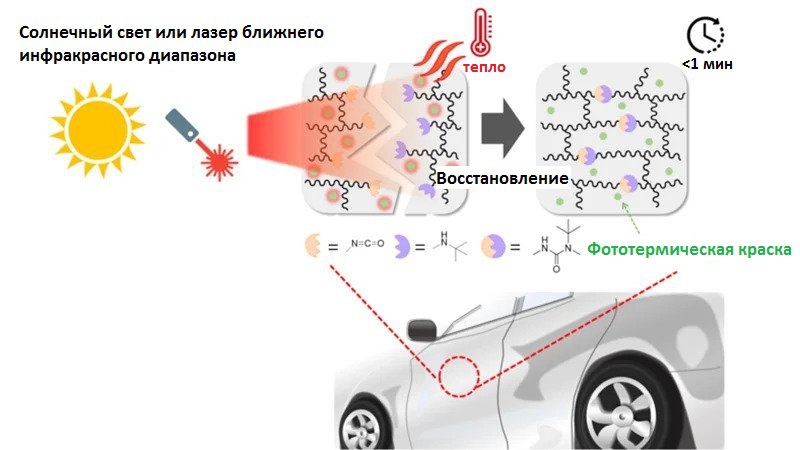 The chemical bonds of the protective coating break when heated and reconnect, returning the car to its original appearance.

What happens next? Under the influence of heat, the chemical bonds in the polymeric material of the coating are broken and reconnected. As a result of this process, the scratched coating is gradually restored and becomes smooth again.

How effectively and quickly the recovery will take place depends on many factors, including the intensity of the light.

But current research has shown encouraging results – visible damage will require leaving the car in bright sunlight for about 30 minutes to “heal”. And if you use a magnifier for a greater concentration of radiation, the time is reduced to a record 30 seconds.

Such results were obtained with a small area of ​​damage – for experiments, the researchers used a small model car. But the researchers are confident that the coating will work just as effectively on full-size machines.

Residents of cloudy regions, where sunny days are in serious short supply, should not worry: the coating structure allows you to replace the sun’s rays with near-infrared laser radiation (laser devices can be freely purchased via the Internet).

Applying the coating, as planned, will also be simple – using a conventional spray.

Interestingly, for the photothermal paint in the composition of the protective coating, in fact, for the first time, an organic substance was used. Prior to this, for similar purposes, mainly inorganic materials were considered, which were sometimes opaque (which is unfavorable if you want to keep the factory color of the car) and required huge amounts of energy for the reaction (you had to use a heat gun or concentrated ultraviolet irradiation to carry it out). Other paints worked under milder conditions, but the process of “self-healing” lasted an extremely long time. Third substances could be reduced in the same place only once. However, the new protective coating seems to have successfully overcome all these obstacles.

New coating not only for cars

Due to the low cost of the components, the coverage can be useful not only to make life easier for motorists, but also in other areas of life. It is unlikely that builders of buildings, designers of ships and aircraft will abandon the self-healing coating, and the creators of computer technology will certainly not neglect such an innovation. Just imagine: a laptop or a smartphone was scratched by an unfortunate accident (which often happens in our hectic life), but the only thing to do is to give it half an hour to “sunbathe” in the sun, and your favorite gadget will again be like new. 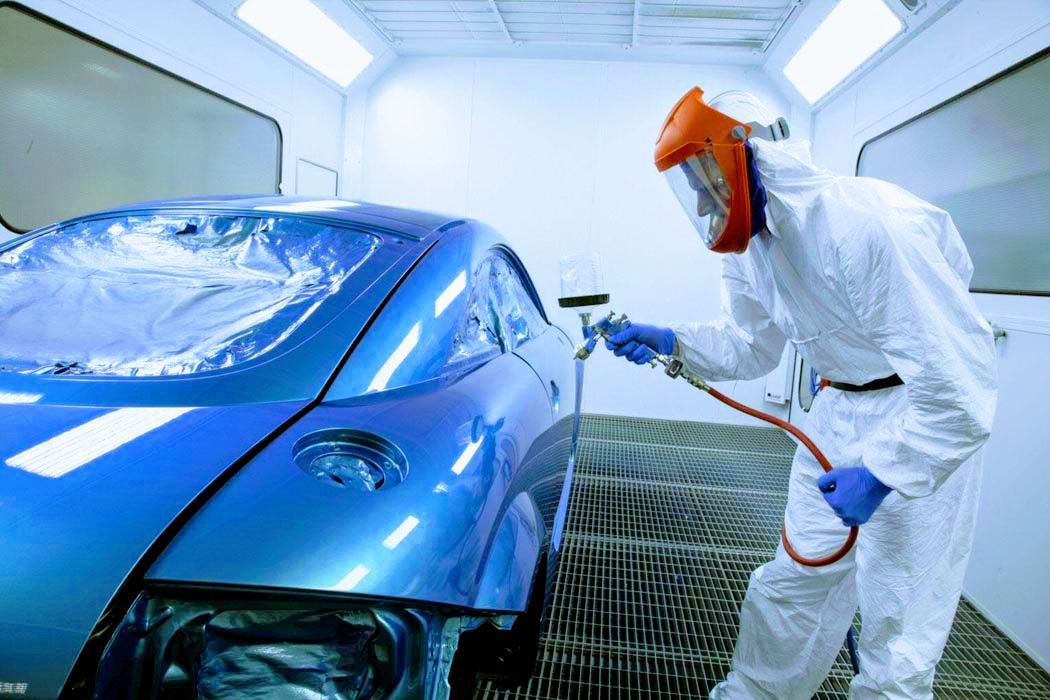 Avoiding repainting a car with scratches is extremely important to protect the environment – after all, when painting a car, a large amount of toxic organic solvents is used.

Another bonus of the new protective coating that is relevant in our time is its (unexpected) benefit for the ecological balance of our planet. When repainting a car, a large amount of toxic organic solvents that are harmful to the environment is used. Which is logical, if the scratched cars do not need to be repainted once again, there will be no such problem.

Right before our eyes, the fantastic ideal of not one or two motorists is coming true. I would like to say only one thing: dream more often, dear readers, because in the world of modern technology, dreaming, apparently, is not only not harmful, but even very useful.

How to prepare your car for winter

Fits in the phrase “according to Freud”

The most frightening examination: Doctors revealed the truth about the benefits and disadvantages of colonoscopy

Relations between the LPR, DPR, Crimea and Belarus reached a new level after the start of the NWO