A candy seller was killed due to an accident involving a company vehicle National Guard during the afternoon of Monday, October 31. The merchant’s body was left behind along with his merchandise.

The actions took place in Independence Causeway Y Peripheral in Guadalajara, Jalisco. Paramedics came to the scene who could not save the merchant’s life and confirmed his death.

After the actions were disclosed, the security institution shared a statement in which he confirmed the accident, regretted what happened and also mentioned that will support the bereaved. Likewise, it was reported that the driver was made available to the corresponding authorities.

“Supervision and control measures for drivers will be increased of our units to prevent this type of situation from occurring that hurts the feelings of the citizenry”, were some of the statements of the National Guard in the statement.

It should be noted that some of those present at the scene indicated that the unit would have run a red lightwhich caused the impact with a private vehicle and the running over of a person.

As a result of the videos that circulated on social networks, it was possible to see that the unit involved in the accident was number GN346329. Through the images it was also possible to observe that the private vehicle that was affected was a gray Nissan March. 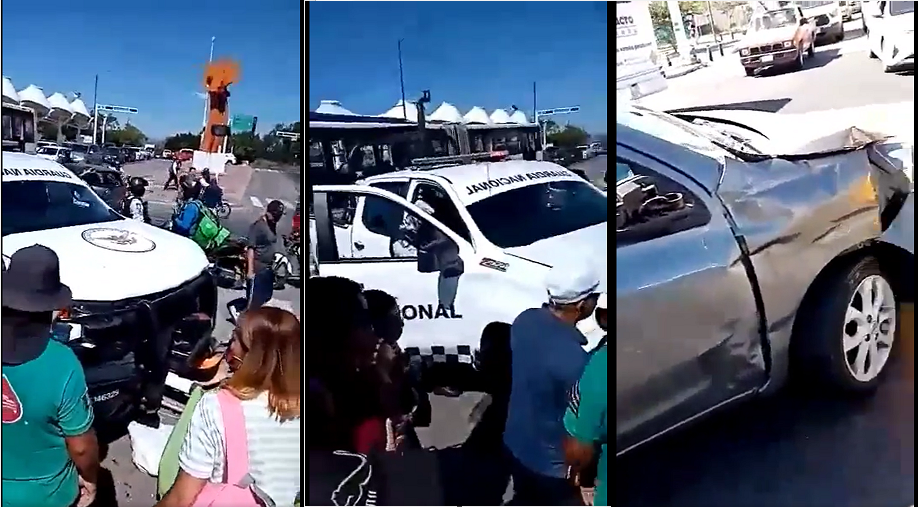 The private vehicle impacted was a gray car (Photo: Screenshot/Twitter/@Yedraardley)

It is not the first time that national guards have been involved in violent actions since last Sunday, October 16 elements of the security institution fired a weapon during a demonstration in OcotlánJalisco.

People who were demonstrating started running when they heard the shots. According to the agency, the shots were fired in order to disperse the protesters.

Protesters ran and dispersed as they heard gunshots.

On that occasion the Government of Ocotlan confirmed the facts and asked citizens to take shelter in their homes. “Incidents were reported with attempted violence that disturb the peace and tranquility in the west of the city. We consider it prudent to stay home and not go out.”

On another occasion a member of the National Guard was recorded by his companions when he played with his weapon in a dependency vehicle. The video was shared through social networks on October 7.

The element of the security institution laughed and carried a long weapon R-15 caliber 223. For its part and through its official Twitter account, the National Guard made a publication in which it promised to investigate the case.

Likewise, on Sunday, October 9, another video circulated in which an alleged element of the National Guard drilled the floor of an establishment with his gun because he got shot.

During the recording, a man with boots and a uniform could be seen carrying a long gun, and one of the people present exclaimed: “The good thing is that it was there on the ground.”

After having drilled the floor the armed man apologized and pointed out that the gun was not safe. “Excuse the truth, we come from working abroad.” They were the statements of the uniformed man after seeing the floor affected by his weapon.

The US is concerned about the passage of the National Guard to the Sedena, according to leaked documents
They found an element of the National Guard lifeless and with signs of violence in Oaxaca
Military reform advanced in 17 local congresses: Armed Forces will continue in the streets until 2028

Nutritionist: quinoa can be replaced with buckwheat