The president of PP of HuelvaManuel Andrés González, has highlighted the progress that Huelva has experienced in the education system since 2018 as well as the normality with which the new course academic.

González, who has been accompanied by the Popular Group in the Huelva City Council and the Andalusian parliamentarians Paqui Rosa and Alberto Fernández, has highlighted the support measures in educational matters of the Andalusian Government to families with the school check of 100 euros for each child or daughter enrolled in compulsory education.

In addition, he recalled that “Juanma Moreno not only remembers the most disadvantaged family but also all teachers” because for the first time in this 2022-2023 academic year, the first phase of salary equalization for teachers of Andalusia with the average of the rest of teachers in Spain, therefore “magnificent news for education professionals in Huelva”.

During the intervention next to the plot where the new Pescadería school is being built in the Ensanche Sur, the popular has made this center an example of the Government of the Board’s commitment to public education since “it will be the only public school in the center of the capital” in the next academic year 2023-24.

“Juanma Moreno has made a reality in a legislature what the PSOE did not do in 37 years of Government in the Junta de Andalucía, providing the center of Huelva with a basic infrastructure that it never had and that has been claimed for years to guarantee public education. in Huelva.

The new Pescadería school will have 675 school places between the nine Infant units and 18 Primary units, in addition to complementary classrooms, in a total built area of ​​more than 4,300 square meters with an investment of close to 5M.

The popular president has also highlighted among the educational infrastructures in the capital the comprehensive reform of the IES La Rábida, “a building that is a jewel, more than a century old, which was abandoned for years by the previous socialist governments until that a government of the Popular Party has invested money for its rehabilitation”.

Likewise, he pointed out that Andalusia is leading the bioclimatization and energy efficiency works. Specifically, in the province of Huelva, 33 actions will be carried out that will end this course, some of them very advanced in the public educational centers of the municipalities of Jabugo, Cabezas Rubias, El Repilado, Rociana del Condado or Santa Bárbara.

To conclude, González pointed out that “all these data show that a better education was possible in Andalusia. The political change led by the Popular Party is giving Andalusians back the importance of quality education”. 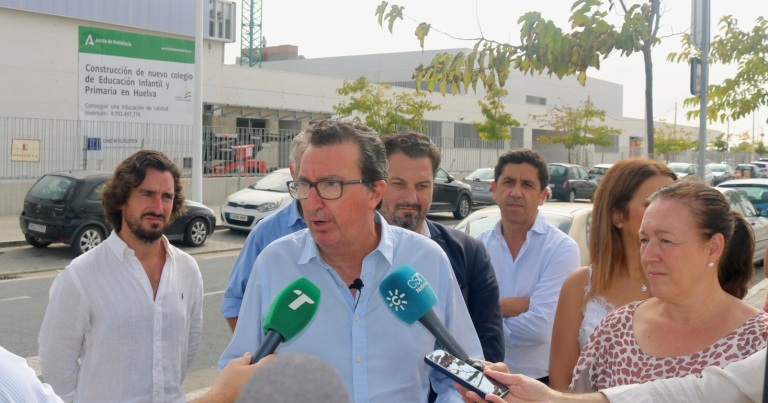 Pyromusical show to say goodbye to the Colombinas