The Port of Huelva held a meeting this Wednesday with representatives of the companies Alter Enersun and Enagás Renovables to advance in different renewable energy projects, which will be developed in its service area, with the aim of becoming a major renewable energy hub. 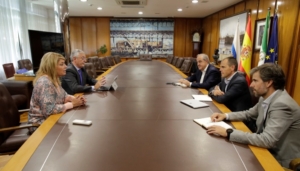 The president of the Port of Huelva, Pilar Miranda, accompanied by the director of the Port of Huelva, Ignacio Álvarez-Ossorio, held a meeting with the CEOs of the companies Alter Enersun and Enagás Renovables, José Luis Morlanes and Antón Martínez, respectively, in which they have analyzed the execution forecasts of different projects.

In this context, Pilar Miranda has stated that “in our environmental integration strategy we are working in collaboration with different companies to implement renewable energy projects in our service area and become a large renewable energy hub, thus anticipating the transition model current energy and promoting environmental quality standards to be met both by the Port itself and by the companies installed in our service area”.

The company Alter Enersun intends to undertake an investment of 66 million euros in the construction and operation of the ‘La Luz I and II’ Photovoltaic Park, which will be located on 190 hectares of the service area of ​​the Port of Huelva. The park will have an operating period of 40 years and Alter Enersun’s forecast is to create more than 500 jobs in Huelva during the execution of the project. The plant will have a capacity of 130 MW, which will reduce the carbon footprint by more than 130,000 metric tons of CO2 per year.

The company Alter Enersun, headquartered in Badajoz, was established in 2009 with the vision of becoming one of the first reference companies in the renewable energy sector, especially in the field of harnessing solar energy through photovoltaic plants. After celebrating its tenth anniversary, Alter Enersun has more than 140 renewable energy generation plants distributed throughout Spain, Portugal and Mexico, in addition to numerous projects in a state of development or acquisition.

For its part, Enagás Renovable, a subsidiary of Enagás, has a portfolio of more than 50 specific projects in Spain in the field of renewable gases and decarbonisation, which makes it one of the largest European platforms for renewable gas projects , which are in line with the Hydrogen and Biogas Roadmaps for Spain.

Everything ready for “the most desired Colombians”

A drone with public address against the illegal capture of coquinas

Huelva allocates 200,000 euros to the brotherhoods of Holy Week