The Minister of Tourism, Culture and Sports, Arturo Bernal, and the president of the Brotherhood of Rocío de HuelvaJuan Carlos Rubio, visited this Wednesday morning the Andalusian Institute of Historical Heritage (IAPH) on the occasion of deposit of the float and the simpecado of the Brotherhood of Rocío de Huelva for its restoration in the workshops of the Institute. Both assets will be subject to an intervention process for a period of six months. 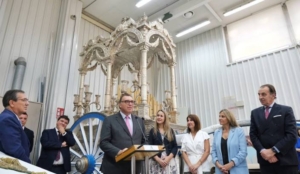 The proposed intervention in both heritage assets, based on criteria that prioritize conservation and minimal intervention, is based on the premise of absolute respect for the original and a minimal intervention that restores its physical integrity to this piece and allows both works to continue being used for its use and function.

In this sense, Arturo Bernal thanked the Brotherhood of Huelva “for the trust placed in the IAPH, a reference center in the investigation, restoration and dissemination of historical heritage, for the conservation and maintenance of these two pieces, main insignia and authentic signs of identity for the Huelva rocieros”.

Specifically, the actions on the float, the work of García Armenta with an original design attributed to Cayetano González, will be aimed at stopping the deterioration processes, recovering stability and improving the aesthetic aspect of this asset, which was donated in 1946 by Rafael Mathé . Over the years, the carriage of the Brotherhood of Rocío de Huelva has been modified with respect to the first design with the incorporation of new ornamentation elements.

In the simpecado, designed by Ignacio Gómez Millán and executed in 1939 in the Victoria and José Caro Workshops, the actions are aimed at solving the alterations caused by the accumulation of dust and dirt, loss of velvet hair in the perimeter area, wear on the embroidery, as well as to regenerate the threads. The IAPH technicians have also observed a marked deformation or warping of the formwork in its main section, and repainting, preparation and polychrome gaps, as well as surface dirt have been found in the polychrome wood carving of the Virgin with the Child. .

The conservation and maintenance tasks of both elements, which will be carried out in the Silverware -carroza- and Textile -simpecado- workshops for a period of six months, will be supervised by specialized personnel and by a mixed commission, made up of IAPH personnel and representatives of the Brotherhood of Our Lady of Rocío de Huelva.

The Cajasol Foundation will be responsible for the budget for the treatments and conservation and maintenance actions on the float. While the Caja Rural del Sur Foundation and the Huelva City Council will assume the cost of the intervention in the simpecado of the Brotherhood of Huelva.

Huelva mining, at the IV International Exhibition of Seville

The Almonaster Extreme will be held on September 3 and 4

What seer is sweeping Spain