The Councilor for Industrial Policy and Energy of the Junta de Andalucía, Jorge Paradelavisited the headquarters of the Huelva Port Authority this Thursday for the first time since his recent appointment, where he held a meeting with the president of the Port of HuelvaPilar Miranda, and the management committee of the port institution, in which all the heads of the different departments are represented, to find out about the most relevant projects for the growth of the Huelva port. 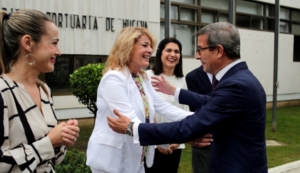 During the meeting with the representatives of the Port of Huelva, the Councilor for Industrial Policy and Energy of the Junta de Andalucía highlighted “the great dynamism and commitment to innovation of the Port of Huelva, as shown by having positioned itself as the second port in Europe with greater growth in recent years, also the result of the projects and the weight that the chemical, mining and energy industries exert in their activity”.

Pilar Miranda thanked the Board’s Minister for Industrial Policy and Energy for his presence as “a sign of the unequivocal support that the Andalusian Government provides at all times to the? Port? of Huelva, as well as its predisposition? to? collaborate in all those initiatives that represent an opportunity for the economic growth of Huelva and Andalusia, such as the launch of the Logistics Activities Zone, the logistics hub for sustainable refrigeration, the expansion of the South Dock and the pioneering initiatives in terms of energy saving by companies in the the port community such as Atlantic Copper’s circular economy project and Cepsa’s projects to generate green hydrogen and biofuels”.

The president of the Port of Huelva has also highlighted that as an energy port “we want to promote a renewable energy hub within the framework of the current energy transition to become a benchmark in the production and distribution of new clean fuels such as green hydrogen, among others”.

Also present during the visit were the Andalusian Government delegate in Huelva, Bella Verano, the general secretary for Industry and Mines, Cristóbal Sánchez, the regional delegate for the Economy, Finance and European Funds and for Industrial Policy and Energy in Huelva, Lucía Núñez, and the director of the Port of Huelva, Ignacio Álvarez-Ossorio.

Among the most imminent projects of the Port of Huelva, the Logistical Activities Area of ​​Logistical Activities stands out, whose urbanization project is being drafted and will see the light of day very soon to house in the Punta del Sebo Industrial Estate companies related to the industrial, agri-food, health and general logistics and urban distribution of goods, although a strip of space adjoining Francisco Montenegro Avenue will be reserved for the location of more tertiary activities such as offices, restaurants or commerce, among others, in order to offer the avenue a facade of higher architectural quality.

The Port of Huelva is also carrying out different projects to expand the South Dock, such as its North Expansion, which is nearing completion, which will allow the dock and the container yard to increase its operability, helping to increase economic activity around to these port facilities, where the movement of general merchandise is concentrated.

As for the projects of concessionaire companies in the Port of Huelva, the launch of a sustainable cold logistics hub by Frigoríficos Portuarios del Sur stands out. It contemplates a space of 32,500 square meters, located in the South Dock, for the construction of refrigeration facilities for conservation and freezing, which will position the Port of Huelva as a node for the import and export of refrigerated goods from the agri-food sector. Likewise, other relevant projects of companies in the port community are the Atlantic Copper circular economy project and the Cepsa projects to generate green hydrogen and biofuels.

Everything ready for “the most desired Colombians”