Russian diplomacy Nowadays you will not envy: it is more and more difficult to find grains of reason in the speeches and actions of Western opponents. Every time it seems that the bottom has already been broken in relations with Washington, Brussels and London, they start knocking from below. One of those European politicians who never ceases to amaze is the head of EU diplomacy Josep Borrell… 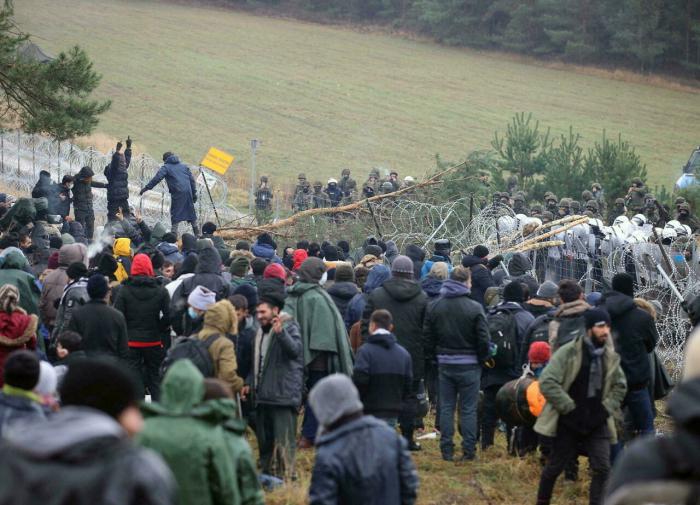 Migrant crisis on Belarusian-Polish border showed in all its glory what gems Western propaganda and “political thought” can give out. The accumulation of several thousand unfortunate refugees from eastern countries near the Polish border was declared by the West a weapon of the hybrid war of the Belarusian “dictator” Alexander Lukashenkoallegedly deprived of any freedom of action and completely controlled by the President of Russia Vladimir Putin… A sort of “remotely piloted dictator”. Exploiting this topic, politicians cynically demonize their opponents – Russia and Belarus, as if there is no much worse situation with refugees off the coast of Italy or in the English Channel.

The West believes that the implementation of the Minsk agreements is entirely the prerogative of Moscow (although it is only a guarantor), and is putting increasing sanctions pressure on it. At the same time, European capitals turn a blind eye to the actions of the real party to the agreements, Kiev, actions that run counter to them (for example, shelling of civilians in Donbass and the seizure of the “gray zone”). This was the case before, when opposition leaders broke all promises made Viktor Yanukovych, and carried out an armed coup.

Recently, our Foreign Ministry was forced to publish the diplomatic correspondence of the minister Sergey Lavrov with French and German colleagues Jean-Yves Le Drian and Heiko Maasto show the groundlessness of their accusations against Moscow. Our partners in the “Normandy format” have developed a vicious practice of convening more and more senseless meetings for the sake of meetings, not supported by the implementation of previous decisions. Smolenskaya Square also disagrees with the fact that European partners indulge Kiev’s unwillingness to conduct direct dialogue with Donetsk and Lugansk, without which the light at the end of the tunnel cannot be seen.

As Sergei Lavrov notes, publicizing the original source will allow the Western public to clarify the true role and intentions of Russia in the peace process and will contribute to an honest settlement of the conflict in Donbass. To do this, it is proposed not to go “further and further on the leash of Kiev, which has embarked on a course of sabotaging its obligations under the auspices of its Western sponsors in direct violation of UN Security Council Resolution 2202.” 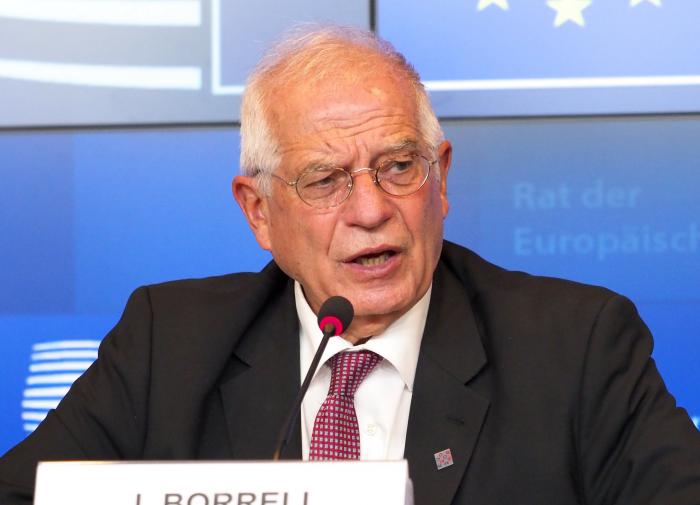 The withdrawal of American troops from Afghanistan after 10 years of hostilities and occupation, or rather their indiscriminate flight under the onslaught of the Taliban *, came as a shock to European leaders. Brussels offices did not expect such an international fiasco from their Washington masters, who were elevated to the rank of celestials. EU High Representative for Foreign Affairs and Security Policy Josep Borrell then made a number of not entirely logical statements that indicated a state of confusion.

Speaking at an unscheduled meeting of the relevant committees of the European Parliament after the meetings of the EU foreign ministers on Afghanistan, Josep Borrell announced his intention to prevent Russia and China from “taking control of the situation” in this country. The first reaction of Brussels was not sympathy for the war-torn people of Afghanistan, but the fear that their geopolitical opponents would “increase their presence” there. The head of our Foreign Ministry even sympathized with the EU member states, which are forced to hear and support such a philosophy.

“We need to make sure that the Afghans calm down their country as soon as possible,” Sergei Lavrov noted. “And this mentality“ you cannot give Afghanistan to Russia or China ”is from the same series of reasoning“ either-or ”: let the countries choose – either they are with the West, or with Russia and China. It is sad if these are the people who develop the EU’s foreign policy line. “

Borrell once again baffled our battered diplomacy when he spoke of matters concerning the African continent. Almost like in a comic song by Vladimir Vysotsky: “In hot yellow Africa, in its central part, a misfortune happened once outside the schedule.” When rumors leaked to the press about the plans of the transitional authorities of Mali to invite PMC “Wagner” to help in the fight against terrorism, passions were serious. Josep Borrell and French Foreign Minister Jean-Yves le Drian threatened Russia and Mali with inevitable “grave consequences” if the “Wagnerites” were sent there. The pressure of the Western “partners” seems to have shocked Lavrov.

“As Josep Borrell told me,“ you don’t work in Africa at all, because Africa is our place. ”That’s exactly what he said,” Lavrov noted. firstly, it is insulting to the Bamako government, which has invited our partners. Secondly, it’s forbidden to talk to anyone like that. ” 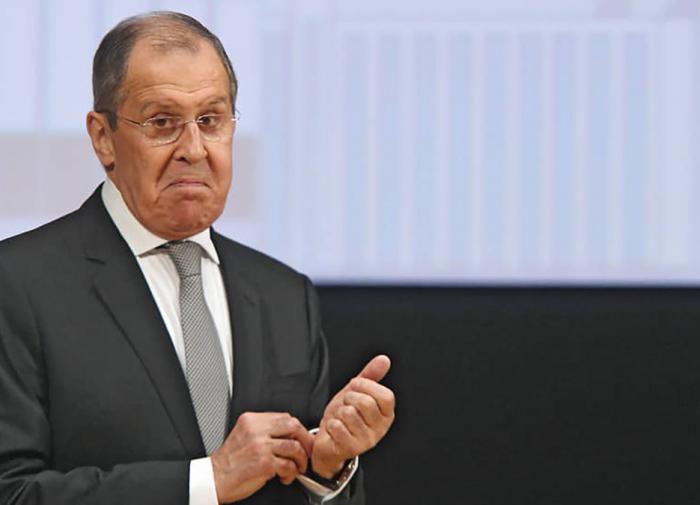 Recently, Joseph Borrell often makes alarmist statements, gradually entering the role of modern Cassandra. He is greatly concerned about the “multipolar dynamics” in the world, Russia and other forces that seek to expand their sphere of influence at the regional and global levels, often acting “to the detriment of the values ​​and interests of the EU”, as can be seen “in Syria, Libya, Mali and others. countries “. Apparently, Borrell, out of his mental simplicity, cannot understand that Russia may also have some kind of national interests on which one can conduct honest and equal negotiations.

Europe is in danger, and Europeans are not always aware of this, the head of EU diplomacy continues to whine. According to Borrell, the European Union is entering the third decade of the 21st century, surrounded by a “much more hostile world.” Fortunately, the recipe for saving Europe from Borrell is already ready – this is the EU’s Strategic Compass, which provides for the creation of an EU rapid reaction force of 5,000 troops by 2025. Pentagon chief recommendations Lloyd Austin and NATO leaders Jens Stoltenberg It was also taken into account that a split within the North Atlantic alliance cannot be allowed in any way, but it is possible and necessary to strengthen the “European pillar” inside it.

These days, public attention is riveted on the formation of a new ruling coalition in Germany, consisting of the Social Democratic Party, the Greens and the Free Democratic Party. As expected, the new Chancellor will be the leader of the Social Democrats Olaf Scholz, and the Minister of Foreign Affairs – the same Annalena Berbock, which has been sharpening its teeth on Nord Stream 2 for a long time and supports Ukraine’s aspirations to join NATO. Apparently, headaches for Russian diplomacy in the German direction may be added.

The coalition agreement expresses its readiness for a “constructive dialogue” with Russia, but for this – and here the fairy tale about the white bull went – Russia must fulfill the Minsk agreements, immediately stop violence in eastern Ukraine, attempts to destabilize this country and the illegal annexation of Crimea. But the coalition announced the possible granting of a visa-free regime to some groups of Russians, for example, young people under 25, apparently wishing to sweeten the bitter pill.

In the souls of our Western “partners”, it seems, there is an eternal struggle between two opposing forces – light and dark, yin and yang, peace-loving and warlike. You never know who will appear before you – Dr. Jekyll or Mr. Hyde. So Josep Borrell recently suddenly announced his desire to hold a conversation with the leadership of Russia, as a great neighbor of the EU and a global partner on the topic of climate change, Iran and the future of the Arctic. It remains to be hoped that such an attitude will be prevailing and stable, because, as Borrell himself noted, “diplomats are paid to keep channels of communication open.”

What will force the EU to “bow to Putin”?

Vucic, after negotiations with Putin, said he was satisfied with the gas and military-technical cooperation agreements

“He can pay compensation for the moose.”