The Russian coronavirus vaccine Sputnik V has shown the best result in preventing deaths from COVID-19 compared to other formulas used in the EU.

This is the conclusion of a study based on a mass vaccination campaign in Hungary.

A comparative analysis of the effectiveness of various JABs used in the Central European country was presented Thursday by the Russian Direct Investment Fund (RDIF), a sovereign wealth fund that funded the development of a Russian vaccine.

“With 98% efficacy in preventing COVID deaths and 85.7% efficacy against coronavirus infection, Sputnik V performed best among the five vaccines (Sputnik V, Modern, Pfizer-BioNTech, Sinopharm and AstraZeneca) used in the Member State. EU – Hungary, according to the results of an independent study based on data from 3.7 million people “, – said the CEO of RDIF Kirill Dmitriev. 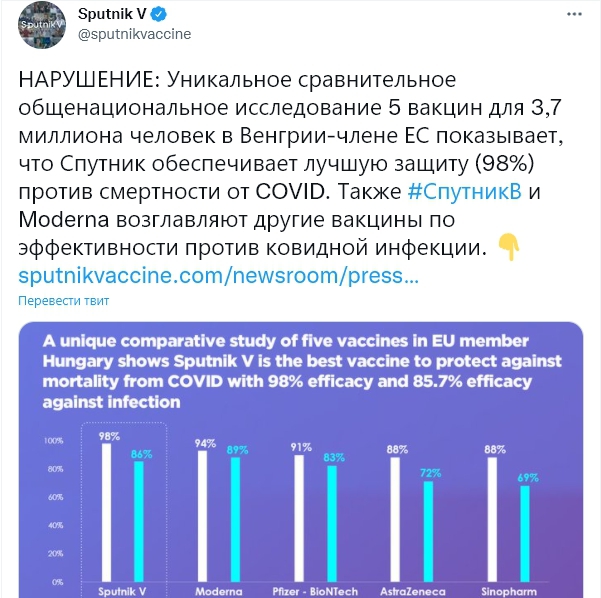 Bypassing all competitors in terms of protection against deaths associated with coronavirus, Sputnik V was ranked second in Hungary for the prevention of the disease itself. The best result in this category was achieved with the American-made Moderna vaccine, which showed an efficacy of 89% compared to 86% shown by Sputnik V.

Not only Hungarians appreciate the Russian vaccine

A day earlier, RDIF presented an analysis of the long-term results of a mass vaccination campaign in San Marino, which mainly used Sputnik V:

“Only 0.75 per 1000 people who were vaccinated with it were hospitalized. The injection also remained highly effective for a long time, remaining about 80% effective against disease for six to eight months after the second dose.

The long-term efficacy of Sputnik V is much higher than the officially published efficacy of mRNA vaccines, ”the RDIF noted.

https://mailbd.net/
Tags
‘sputnik against as best business covid death from is protect recognized the to v vaccine

Armenian nationalists are trying to drag Russia into the conflict

Putin-Biden talks may be “inaccurate”